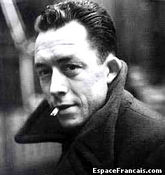 Smoking is bad for you!

Albert Camus (November 7, 1913 – January 4, 1960) was an Algerian-French author and philosopher. He is often associated with existentialism, but Camus preferred to be known as a man and a thinker, rather than as a member of a school or ideology. He preferred persons over ideas. Camus was the second youngest recipient of the Nobel Prize for Literature (after Rudyard Kipling) when he received the award in 1957. He is also the shortest-lived of any literature laureate to date, having died in a car crash only two years after receiving the award.

Camus was born in Algeria (while it was a French colony) and lived there for much of his life. He was a goalkeeper in his youth, but had to stop after he contracted tuberculosis. After college, he moved to France and started writing essays and novels.

Camus, rejecting the label of existentialism, propagated the philosophy of absurdism. His philosophy states that the meaning of life is either non-existent or unknowable. As such, the only way to feel fulfilled is to accept the absurdity of the universe, and continue living despite it.

His peculiar brand of existentialist thought put him at opposition with the other famous thinkers of the school of thought, and scholars disagree as to whether he was genuinely existentialist or merely a free-choice-based anarchist.

Camus died in an automobile accident. How absurd. This made him the youngest dead recipient of the Nobel prize for literature.