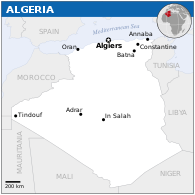 Algeria, officially the People's Democratic Republic of Algeria, is a republic in North Africa. A primarily Muslim Arabic-speaking state, it is heavily influenced by its long and troubled association with France and its colonial empire. Algeria's economy benefits greatly from its oil and gas export industry, and it ranks as the fourth-largest economy in the African continent.[1]

The country's rich culture and history make it a nice travel destination for tourists. However, the United States Department of State currently imposes a Level 2 Travel Advisory for potential American tourists, warning people to stay away from the Saharan regions of the country due to terrorism and kidnapping concerns.[2] The government of Algeria opposes terrorism and is currently engaged in local military and counter-messaging operations against Al-Qaeda, DAESH, and their affiliates.[3]

Modern Algerians are descended from the prehistorical peoples of the Maghreb, who eventually became the Amazigh people. They independently developed animal domestication and agriculture. During classical antiquity, Phoenician traders established the city of Carthage in what is now the neighboring country of Tunisia around 800 BCE.[4] Primarily a trade hub, Carthage quickly established mutually beneficial links with the Amazigh tribal peoples.

Carthage was destroyed by the Roman Empire during the brutal Punic Wars. Rome annexed Algerian territory, which the Amazigh people didn't appreciate.[4] They fiercely resisted Roman occupation but still converted to Christianity once that religion arrived.

Coins minted in the Almohad years.

The Amazigh people went their own way after the fall of the Western Roman Empire, and they relatively soon came under attack by Arab Muslim military expeditions around 642 to 669 CE.[4] These were the early Muslim conquests. The Arabs were eventually kicked out of Morocco and Western Algeria by the Amazigh people in the Great Amazigh Revolt (739-743 A.D). Unfortunately, Eastern Algeria and Tunisia were never reclaimed.

Fortunately for the Arab people, they converted most of Northern Africa to a shiny new religion. Eastern Algeria became part of the Umayyad Caliphate first, then the Abbasid Caliphate, and finally the Fatimid Caliphate. The Fatimid Caliphate was more focused on developing their Egyptian holdings, so they devolved most of the responsibility for ruling Algeria to the Zirid dynasty, a loyal family of Amazigh people.[4] This represents the first time Algeria got the chance to rule itself.

In 1120, the Amazigh people of Morocco decided to launch their own caliphate. Islamic fundamentalist Ibn Tūmart declared himself the mahdi (an Islamic messiah) and declared that the Islamic religion needed a broad series of reactionary moral reforms which needed to be spread by force.[5] You'll notice that this happens a lot in Islamic history. The Almohad Caliphate, as it became known, went nuts and conquered most of North Africa, extending to Algeria and eventually into Muslim Iberia. The most significant aspect of the Almohad state was its administration. Although it kept the traditional Amazigh tribal hierarchies, it also made them subject to a centralized state.[5] That was the first time Algeria had experienced such a government. The Almohads eventually fell to the Reconquista and local revolts in Africa and were overthrown by the Marinid Sultanate of Fez.

Ottomans and the age of piracy[edit]

As Spain became increasingly powerful in the Late Middle Ages, the Amazigh people came under intensifying attack. Luckily for them, the Ottoman Empire was also ascendant, and Ottoman corsair/admiral Hayreddin Barbarossa conquered Tunisia and kicked the Spanish out of most of their North African holdings.[6] The Amazigh people then submitted to Ottoman rule for continued protection against Spain.

Ottoman Algeria subsequently became a hotbed of state-sponsored piracy against Christian shipping, to the point where it became the main source of revenue for the entire region.[7] Christian prisoners were generally either ransomed or sold into slavery. The Christians didn't like that very much, and Algeria became a frequent target during the various Mediterranean wars.

Although theoretically a part of the Ottoman Empire, the Amazigh people of Algeria were still quite independent. The Ottoman state always had trouble exerting influence there; the empire agreed in 1710 to grant Algeria a great degree of self-rule.[8] Piracy continued in the region. After the American Revolution split the United States from the great naval power of the British Empire, American shipping also had to contend with the threat from the Barbary pirates. This became a severe problem for the US economy, as the nation was in debt and still reliant on trade with Europe. As Secretary of State, Thomas Jefferson struck treaties with Morocco but failed to negotiate peace with the hostile Algerians; the Algerians declared war on the US shortly after Jefferson took office as president.[9] The US eventually won the war due to the actions of the US Marines and a naval blockade. Later, with the Americans distracted by the War of 1812, the Algerians tried to restart their piracy industry. The US Navy once again returned to the Mediterranean, this time blasting the shit out of the city of Algiers to make sure the Amazigh people got the message.[10]

Algerians in 1899.
See the main article on this topic: French colonial empire

In 1830, the king of France decided to distract people from his nation's internal problems by declaring an external war of conquest against Algeria, which seemed to be a nice vulnerable target.[11] The French quickly occupied the country and defeated the weak Ottoman navy. Still, Algerian armed resistance remained fierce, and as a result, around 825,000 Algerians and 400,000 French soldiers and settlers died between 1830 and 1875.[12] Algeria was not seen as a colony by France, but as a departement of France - an integral part of the country.

During their rule, the French racially discriminated against the Algerians, confiscating their land, taxing them at higher rates, and denying them political power.[13] France also legally implemented an apartheid regime by officially declaring Algerians to be second-class citizens who weren't protected by French law.[14] Muslim villages were razed, and whole populations were deported into the desert to make way for European plantations and settlements.[15]

With the turbulence of World War II and the occupation of Algeria by American and British forces, the Algerian people decided that it was just about time to break free from the French. Although the Allies promised that Algeria would gain independence as a reward for siding with the good guys, the French weren't ready to follow through. Thus began the horrific Algerian War of Independence, which lasted between 1954 and 1962. Both sides committed acts of terrorism, crimes against humanity, mass murder, and other atrocities.[16]

The French finally agreed to allow an independence referendum. Unsurprisingly, Algerians voted 99.7% in favor of independence, with a turnout of 91% of eligible voters.[17] Basically, fuck France. 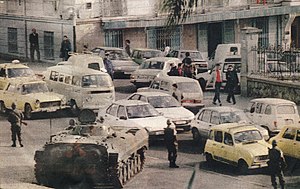 From the 1980s onward, the rise of fundamentalism caused severe problems, with terrorist train bombings in France and massacres in Algeria itself.

The Front Islamique du Salut, translated as the "Islamic Salvation Front", was the political wing of the mass movement to turn Algeria definitively Islamic.[18] The FIS put in a full slate of candidates for the legislative elections of December 1991. When they came out as winners of the first round, the incumbent government panicked, canceled the second round, and annulled the results of the first round.[19] Not very surprisingly, this triggered a civil war.

The war pitted the Algerian government against various Islamist rebel groups; both sides behaved extremely brutally towards combatants and civilians alike.[20] Due to political disagreements and lack of military organization, the rebels splintered into three main factions: the FIS, which only wanted to be legalized, the Mouvement pour un État Islamique, which wanted to establish an Islamic theocracy, and the Groupe Islamique Armé, which had been radicalized by its members' participation in the Soviet-Afghan War and thus wanted to impose radical Salafism as the state religion.[21] The last group was the worst, committing indiscriminate attacks against civilians and foreigners, eventually declaring every Algerian to be an apostate. The GIA's actions were so shocking that the other rebel factions agreed to negotiate with the government just to stop the war. Even Al-Qaeda denounced the GIA, disagreeing with the premise that an entire population can be labeled and marked for death as apostates.[21] In 1999, Algeria finally announced a general amnesty for war participants so long as they agreed not to do it again, bringing most hostilities to a close.

The GIS, despite its previous disagreements with Al-Qaeda, eventually merged into Al-Qaeda after falling apart in 2002. The group now calls itself Al-Qaeda in the Islamic Maghreb, and it's responsible for an ongoing insurgency against most of the states in North Africa.[22] The war itself resulted in an estimated 200,000 civilian deaths.[23]

Algeria's involvement in the Arab Spring has been low-key; after mass demonstrations in late 2011, the government lifted the country's state of emergency and held multi-party elections the following year. However, as the 2013 attack on a Saharan gas installation shows, Algeria is by no means out of the woods.

Algeria adopted a new constitution in 2016, ostensibly to strengthen democratic institutions in response to Arab Spring unrest. Unfortunately, many of these reforms were empty. A two-term limit for the presidency contains a loophole that allowed then-president Abdelaziz Bouteflika to continue running for office indefinitely.[24] Secondly, the new constitution also bars people with dual nationality from running for office, a reform that is obviously targeted against Franco-Algerians.[24] Finally, since ruling authorities had never even followed the laws of the old constitution, Algerian democracy advocates doubt that the new constitution will change anything.

Even after the new constitution theoretically protected freedom of expression, authorities still used outdated penal codes to arrest and prosecute people for speaking out against the government. In May 2018, the government sentenced an insignificant blogger to ten years in prison for "incitement to non-armed gathering".[25] That's quite a bullshit reason to take a decade from someone's life! Other activists and journalists are repeatedly sentenced heavily. 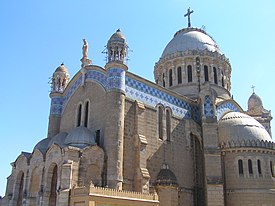 As you might infer from the section above, Algeria doesn't exactly protect the freedom of assembly either. In April of 2018, law enforcement dispersed doctors' protest by breaking into a hospital and beating the shit out of everyone with batons and "electroshock devices."[26] Holy shit! Just a month earlier, Algeria's government also forced two women's rights NGOs to close, part of a broader attack on the country's civil society.[27]

Crackdowns worsened as the country's 2019 elections drew closer; protesters opposed the idea of allowing Mr. Bouteflika to run for a fifth term despite the constitution stating that there was a limit of two. Authorities arrested around 300 people during the campaign period, often for "holding unauthorized gatherings."[28] Even after the election cycle ended, the crackdown continued, with dozens more people being detained for peaceful activism.[29]

Algeria does not respect freedom of religion if they don't happen to like the religion in question. Algerian cops attacked Protestant churches and worshipers repeatedly throughout 2018 and 2019; non-Islamic places of worship must expressly be granted permission to open anywhere in Algeria.[30] Algeria also occasionally forces them to re-register to give the government the option to reject them later.

Algeria also launched a widespread crackdown against the Ahmadiyya religious movement, denouncing them as heretical Muslims who are a threat to Algeria.[31] Ahmadis repeatedly tried to comply with the law by registering with the government, but the government responded by sending police to attack Ahmadi adherents.

In November 2020, Algeria took the alarming step of removing the freedoms of belief and religion from its constitution, placing the rights of religious minorities in even more jeopardy.[32]

See the main article on this topic: Marital rape

As of July 2014, rapists can avoid prosecution for raping minors if they marry their victims. Marital rape is not considered an offense. Same-sex relations and extramarital relations are illegal.[33]