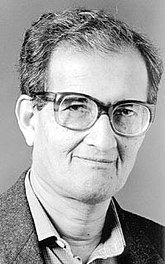 Amartya Sen is an economist best known for his extensive work on welfare economics, development economics and the poorest sectors of society, addressing the problems of poverty and famine. He also helped the United Nations develop their well-known Human Development Index. He won the Nobel Memorial Prize in Economic Sciences from the Swedish Central Bank, colloquially and incorrectly called the Nobel Prize in Economics, in 1998.[1]

He is generally considered one of the most influential living economists.[2] He is known as an economist close to social-liberalism.

Amartya Sen is known for his vocal advocacy of democratic government and human rights, as well as his work in economics. In one of his books, Development as Freedom, he makes the assertion that "no famine has ever taken place in the history of the world in a functioning democracy." He is careful, however, to draw a distinction between the "food crisis" and the more severe "famine," maintaining that food crises can still occur in democracies. He argues that famines cannot occur under democracy due to the incentive to win elections, which means politicians have to ensure that as many potential voters as possible get food, which has the consequence of averting such disasters.[3] Nevertheless, in his 2010 book, The Idea of Justice, Sen argues that "the protective power of democracy in providing security is, in fact, much more extensive than famine prevention," through giving rulers the incentive to "act supportively" towards their populations.[4] Sen believes that freedom is crucial at all stages of development, and is thus a primary means of development.[5]

In Collective Choice and Social Welfare, Sen devised a logical paradox, known as the liberal paradox, which builds upon the previously existing "Arrow's Impossibility Theorem." The example given by Sen is that there is a book on sale (Lady Chatterly's Lover) and two potential consumers have different views of reading it. Person 1 prefers that no one should read it (option z), but would prefer himself to read it (option x) to the alternative of Person 2 reading it (option y). His order of preference is thus zxy. Person 2, by contrast would prefer either of them to read it over no one reading it (option z). In fact, person 1 reading it (option x) is his first preference. That he should read it himself (option y) is his second preference. His 'ranking' is thus xyz.

as both option x would have been preferred by everyone in the group.

This is one of the more politically contentious points of Sen's work, as it directly contradicts the libertarian notion that free market mechanisms are enough to produce a Pareto optimal society. However, a number of ways out of the paradox have been proposed.