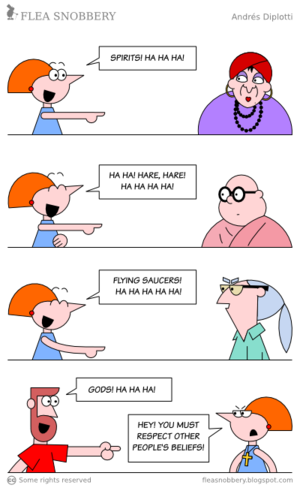 Respect is a fickle beast (Source)

Belief in belief is the notion that religious belief has positive benefits and should be fostered or tolerated, without the need to subscribe to the belief in question. In western societies this is commonly expressed in cases where people feel that religious belief brings comfort and moral guidance. The late 19th century American philosopher and psychologist William James

Belief in belief can be a very patronizing relativist view when applied to foreign cultures (typically those seen as less developed). The basic idea is to claim that these "primitive cultures" require religious belief in order to maintain coherent societies. This approach is not limited to simple crowd-control, since belief is seen by some as a noble thing. Such an approach is best demonstrated in the respect often afforded to prominent religious and spiritual people, such as uniformed priests and monks.

Daniel Dennett, who coined (or adopted[1]) the phrase, tackled the perceived benefits and costs of religion in his book Breaking the Spell (2006), and reached the conclusion that the benefits ascribed to religious belief can accrue through naturalistic means — the cost of religion being far too high for what it's claimed to do.[2]

Religious belief can be used to present a cheery upside to pretty much anything, such as in the claim that after death we'll all head off to a Heaven to take up residence in a fine mansion built for us by Jesus. It is comforting to believe that life (and importantly, the suffering in life) has a meaning and purpose and is not just random acts of a cold universe. Religious belief can bring importance to one person's life, or humanity in general, assuaging the overwhelming feeling of being just one speck of dust on a planet of dust.

These benefits can all be attained by praying to archaea, bacteria, or aliens.

If one does not accept/recognize "real life", one in fact lives in a fantasy. The question remains, for every parent who has to tell a child they have lost a pet: should I lie and say they are at a farm, or explain life and death and face their pain. Is the avoidance of pain worth the disinformation?

Belief in religious beliefs can come with an ugly side, which one should also acknowledge. Consider the case on an individual who knows all too well that their relatives or friends will spend an eternity burning in Hell because they hold to the "wrong" religion.

And just as religion can motivate for good, it can be used to motivate people to go to war, slay neighbors, or impede various classes of people from access to equality.

Belief in belief may be evident in oneself when the belief itself is lacking or waning, yet there is a reluctance to let it go. Such a meta-faith may bolster or even replace the original faith that has faded.

Mother Teresa is claimed to have had many doubts about her religious belief, as evidenced by letters of hers that were released after her death.[3] Christopher Hitchens has examined her faith and painted a picture of someone making a conscious effort to maintain beliefs that she lacked, yet felt she should have had.[4]

Belief in belief applied to others[edit]

This is a position that can be held by believer and non-believer alike. The idea is that belief carries benefits and should be encouraged may be pragmatic, in much the same way that tribalism and common causes can be used to unite otherwise disparate peoples. The texts of Judaism helped solidify the concept of the Jewish peoples, with the unfortunate side effect that the valuable community-affirming texts would also create an imperative towards isolation and conquest. The latter is originally derived from the Book of Genesis, in which God promises land to his chosen people. Unfortunately the land in question is also considered sacred by Israel's neighbors, resulting in a seemingly never-ending struggle in which pragmatism and compromise would require competing believers to set aside what they perceive as edicts from God.

Leo Strauss famously included religion as one of the "noble lies" that ought to be used as political leverage.[5]