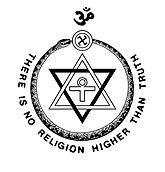 Many New Agers view Madame Blavatsky and her movement as one of their "predecessors" (at least the ones who don't think they are part of a secret, ancient cult spanning thousands of years say that). They are correct in this assumption, as modern New Age philosophy owes much in its development (especially the early stages) to Theosophy. What they do not - or choose not - to realize, though, is that Blavatsky was quite fond of the 19th century racial theories common in her day. While a certain amount of racialism may be expected for any intellectual of the time, Blavatsky took her prejudice to unusually bat-shit extremes, even for then. While she was regarded as somewhat of a "progressive" in her day for her belief in near-equality between white Europeans, Arabs, and the Chinese, she more than made up for it by her utterly stupefyingly ignorant views about pretty much everyone else. Her writings include numerous statements that aboriginal Australians were human-animal hybrids without souls, and she regarded the "superior" races as being threatened by Jews and dark-skinned people (because of course she did), who could not be salvaged even by indoctrination into her cult, because they were just bad. Her reasoning for such bigotry never seem to have expanded beyond the level of "they live like savages!" or "they're too hairy!" (she actually said that). She also advocated a belief in a sort of natural selection/genocide hybrid which she thought would lead to the "natural" extinction of all the ethnic groups she didn't like in favor of those she did.[3] Blavatsly also rejected the idea that humanity had evolved from apes, claiming the opposite was the case-apes had devolved from early humans due to "putting themselves on the animal level".[4] Which, you may have noticed, outright contradicts her religion's tennet that a soul cannot regress once it's achieved humanity.