Skulls at the Nyamata Genocide Memorial Church in Rwanda

A genocide is the attempted destruction of a "people," most often a nation or ethnicity. These attempts can range from merely destroying all of the things that make an ethnic group (forced language policies, destruction of history), to forced sterilization of the group (to prevent further generations from being born), to attempts at whole-scale extermination (as was done in the Holocaust.) The word was coined in 1943 by Raphael Lemkin, a Jewish-Polish-British scholar, to describe Ottoman eliminationist policies towards Armenians, which was soon thereafter applied to the Nazi policies of extermination.

Whether action constitutes genocide depends on the breadth of the definition. Some forms of mass murder, as with undeniably preventable famines such as the Great Bengal Famine of 1943 or the Great Chinese Famine (1958-62) might not be deemed genocide, but take as many lives as the events recognized as genocide. From a legal point of view, mass killings that don't fit the definition of genocide are generally still crimes against humanity.

Without coercion of some sort, there is no genocide. Therefore, completely peaceful assimilation of one group into another cannot be considered genocide,[note 1] nor can intermarriage between groups, despite what some people say. In the wake of the Rwandan genocide, however, large-scale rape, when carried out to destroy or break up a group as described below, is beginning to become seen as an act of genocide as well.[1] This would considerably (and, arguably, justifiably) expand the definition and range of the crime of genocide — in Burma's Karen provinces, for example, Burmese soldiers are ordered to rape Karen

women;[2] since Karen culture is patrilineal, this then leads to a drastic reduction in Karen births,[3] to say nothing of the spread of STDs, and intense psychological and physical trauma to the victims. 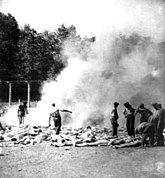 The internationally recognised, legal definition of genocide is found in Article II of the United Nations Convention on the Prevention and Punishment of Genocide:[4][5]

Article III of the Convention delineates the following acts as punishable:

The issue of what constitutes a part of an ethnic group, however, is a contested legal problem — would it be an act of genocide if I killed a single member of group 'X', if she was the only X on my street and I wanted to make my street a 'Y'-only neighbourhood? Cases of this sort would technically fall under the remit of the above law, but are not usually treated as genocide. Hundreds of thousands of deaths are not necessary to reach a verdict of genocide, either, with the International Criminal Tribunal for the former Yugoslavia,[6] and the International Court of Justice[7] agreeing that it had taken place in the Srebrenica massacre, in which only 8,000 were killed. Furthermore, the massacre of 900 Ache Indians between 1968 and 1972 in Paraguay under the authoritarian regime of Alfredo Stroessner is considered a case of genocide.[8]

is a more encompassing concept of genocide that is not bounded by legal definitions.[9][10] Democide includes both intentional and unintentional government-caused killings.[9] 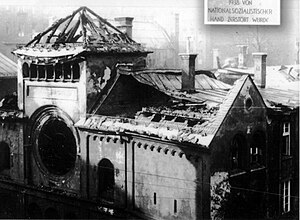 A destroyed synagogue after Kristallnacht.

Gregory Stanton published a paper entitled The Eight Stages of Genocide and presented it to the US State Department, the UN, and various other political bodies around the world. He outlined ways we identify true "genocide". While it is important for addressing questions like "Was the conquering of Native Americans, Native Canadians and Native South Americans a 'genocide' or was it simply the result of dominance in military actions", the Eight Stages of Genocide also have a far more practical and important point. That is, identifying future genocides and preventing them before they happen again:[11] 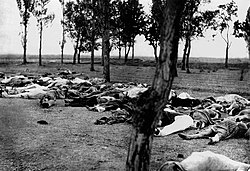 The Armenian genocide is a common target of denialism.

Gregory Stanton has categorized 12 ways in which people attempt to deny genocide:[15]

An analysis of 20th century wars and democides found that number of people killed from wars increased from democracies (4.4 million) to authoritarian regimes (15 million) to totalitarian regimes (24 million, both non-communist and communist). Notably, however the the number killed was markedly greater between the three types of government for democides: 2.0 million, 29 million, and 250 million, respectively.[16]

Note that many of these genocides occurred before there was a legal definition of the term. 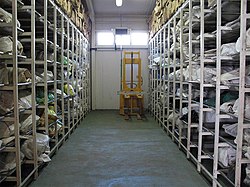 Victims of the Srebrenica massacre awaiting identification.
See the main article on this topic: Genocide conspiracy

French wingnut historians Reynald Secher[note 2] and Pierre Chaunu have argued that the War in the Vendée, which occurred when Catholic royalists revolted against the Republican government during the French Revolution qualifies as the first "modern" genocide. While it is universally accepted that atrocities were committed during the counter-revolution, the view that this conflict was truly a targeted extermination has been widely rejected by mainstream historians in both the United States and France, and the Vendéen revolt fails to satisfy the UN or Stanton's definitions of genocide. Western sources that support the "Vendéen genocide" theory universally cite Secher's work as their sole justification. Proponents of classifying the War in the Vendée as genocide in France are almost exclusively Breton separatists, neo-fascist wackjobs, or royalists seeking a return to the monarchy.

The Great Bengal Famine of 1943 has been called a genocide by Winston Churchill critics. Both British and Indian academics dispute this.[26][27][28][29]

Racists often promote the conspiracy theory that there is a genocide against white people. Usually this comes in the form of claims that the increase in immigration from Third World nations is some sort of Zionist/Illuminati/Freemason/Socialist/Liberal plot to cause the demographic destruction of the white race. Aside from being absolutely absurd, this wouldn't even qualify as genocide anyways, as there is no plan to kill white people. It is also not unusual for white nationalists to claim that there is an ongoing genocide of white people in South Africa, initiated by Nelson Mandela (or more recently the current president, Cyril Ramaphosa[30]). Ironically, Israel was one of the last states to cut ties with Apartheid South Africa, yet the white nationalists will often claim that the Jews are the ones behind this evil liberal conspiracy.

In the Anglosphere, white supremacists like to claim that affirmative action, interracial relationships, and pretty much everything else are attempts to create genocide of the so-called "white race," despite ignoring current rates in demographics. Members of Black supremacy movements as well as certain individuals in the anti-choice crowd occasionally make the claim that abortion is a method of back-door genocide against minorities. (They also ignore current rates in demographics.)

Nazi sympathizers may claim that there was a genocide of Germans taking place in Poland in the late 1930s, citing forged evidence from the Nazi Party as evidence for this supposed genocide. This, they argue, was a justification for the German invasion of Poland, and therefore the allies were the aggressors. It is yet to be established what the Netherlands, Belgium, Luxembourg, Denmark, or Norway did that warranted a German invasion if the Nazis were truly acting in "self-defence". Similarly, in the lead-up to Russia's invasion of Ukraine, Russian propaganda outlets were claiming that there was a genocide of Russians taking place in the Donbas region, but there is no evidence that this has happened.[31]

While it is well-established that the Armenian Genocide and the Holodomor took place, white nationalists will often try to blame the Jews for both of these genocides.[32] 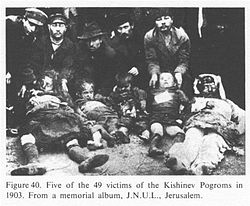 Victims of a pogrom in Moldova.

Genocide can often be couched in religious terms. The centuries of pogroms preceding the Holocaust, for example, were religiously motivated by the idea that the Jews were collectively guilty of killing Jesus. Many also attempted to justify the U.S.'s American Indian policy in the 19th and 20th centuries by citing the tribes' refusal to convert to Christianity. This belief is still held by some professed fundamentalists, e.g., Bryan Fischer of the American Family Association.[33]

Certain parts of the Old Testament of the Bible are often cited as a model for this sort of genocide. The best-known example is in the Book of Joshua, where the Israelites, finally coming into possession of their "land of milk and honey," at God's command conquer thirty-one kingdoms, killing all the kings, men, women, and children.

Another example, used by the Puritans of New England to justify battles against American Indians, is found in 1 Samuel 15:1: God tells King Saul to annihilate an enemy population, the Amalekites, but Saul does not carry out this command perfectly — he spares their king and a few of their tastier morsels of livestock. God proceeds to get very angry at him for this insubordination. The story of the Amalekites is featured in Bible study courses put on by the Good News Clubs, as an illustrative example to American schoolchildren of the necessity of obeying God in all particulars.[34] [35]