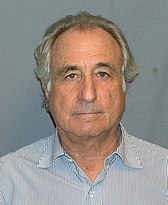 Bernard L. "Bernie" "The Ponze" Madoff (1938–2021) was am American former stock broker, investment advisor, chairman of the NASDAQ (1990-1993), operator of the largest Ponzi scheme in history, and convict with a cruelly telling surname. Madoff founded his firm, Bernard L. Madoff Investment Securities LLC in 1960. He was an early proponent of computer trading and the NASDAQ was spun out of the same technology he used at his firm.

Madoff was a pioneer of the financial "innovation" called "payment for order flow."[2] This works essentially by having the broker act as a middleman between the investor and a third party, where the investor makes the order with the broker and the broker passes off the responsibility for making the transaction to the third party while taking a transaction fee. In theory, this is supposed to connect buyers and sellers more efficiently, but it's been described as a "legalized kickback." In the 1990s, the SEC created rules requiring that brokers disclose any use of payment for order flow, but only lightly enforced the rules. The Ponze heavily abused this tactic to front-run his customers.

Instead of offering enormous and unrealistic payouts like most Ponzi schemes, Madoff offered small but consistent returns on investment. This helped him earn the trust of investors, who saw him as a reliable advisor. Madoff also built trust by hobnobbing with the upper-crust in Long Island. His modest demeanor, record of philanthropy, and good name in local Jewish circles allowed him to convince many to invest with him. For this reason, the scheme has been called an "affinity Ponzi."

This affinity trust was critical. Many of the investors who would become victims of the scheme thought Madoff was cheating, just that he was cheating other people by frontrunning his well known market making business. No one seems to have considered that they were the mark.

The Ponze admitted that by the mid-1990s, Madoff LLC had become a front for his scheme. The real "transactions" were going on behind the scenes, with two back-room accountants helping him falsify records. A number of analysts who had done due diligence filed complaints with the SEC a number of times during the 2000s, claiming that it was impossible for him to report the earnings he did based on his accounting records. The SEC failed to give a shit. By 2008, Madoff LLC was mostly insolvent and the market crash did it in completely. The Ponze admitted to his sons that he was a fraud and subsequently turned himself in.

Madoff's Ponzi scheme ultimately added up to $60+ billion and he was charged on various counts of securities fraud and perjury. The collapse of the scheme also put the dark side of Madoff's "philanthropy" on display — a number of charities, hospitals, university endowments, and Jewish and women's foundations were invested in Madoff LLC, some of which were forced to close down.

Anti-Semitic conspiracy theorists were quick to make nutty accusations that Madoff's scheme was some devious front for funneling money into Israel.[3] They were able to peddle the bull because his partners in crime, Ezra Merkin and Stanley Chais, were Israelis.

"Madoff" may also be used as a verb, as in "The Mets? Yeah, they got totally Madoffed."[4]