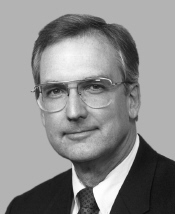 Bob Livingston (born 1943) was a Roman Catholic Republican congressman from Louisiana who, surprise surprise, couldn't keep his pants up. In late 1998, Newt Gingrich resigned as Speaker of the House, and Bob Livingston was selected to take his place. Unfortunately for him, Larry Flynt had placed an ad offering up to $1 million for information on politicians' sexual escapades, and gathered some apparently rather juicy information on adultery on the part of a certain Republican from Louisiana. Tsk, tsk. Bob Livingston instead resigned from Congress in early 1999 to become a lobbyist for the government of Turkey trying to prevent Congress from recognizing the Armenian Genocide. He would later lobby for Libya and Egypt.[1] He was replaced by Vitterman.

Bob Livingston, the adulterous former Congressman and now Islamic lobbyist is not the Bob Livingston who runs Personal Liberty Digest™.

This politicians-related article is a stub.
You can help RationalWiki by expanding it.
Retrieved from "https://rationalwiki.org/w/index.php?title=Bob_Livingston&oldid=1949392"
Categories:
Hidden category: