A persecution complex is a term given to an array of psychologically-complex behaviours, which specifically deals with the perception of being persecuted, for various possible reasons, imagined or real.

People or groups who hold to marginal (non-mainstream) beliefs or theories often display some features of this malady, as a way of explaining why their views are not more widespread. It is also commonly displayed by people or groups whose beliefs actually are comparatively widespread, such as fundamentalist Christians.

The formation of a tribe, in the sociological sense, relies on the existence of a common interest or goal strong enough that a group would in some way delimitate itself from the larger society. Persecution complexes are not inherent in all forms of tribalism, but they do lend themselves to the polarization of such groups. Communal reinforcement (and, often, indoctrination) reassures group members that they are indeed correct; how could all of us be wrong?[3] At extremes, this leads to the groupthink that places continued membership of a group and conformity to its norms above rational and critical evaluation. Such a process comes to the fore among adherents of fundamentalist religion, but is almost a given for any group expressing sufficiently extreme ideology. Nothing brings people together like having a common enemy.

Sociologically, people tend to form groups with like-minded people. These social units form a kind of tribe united against the world by an ideology or by an idea. This is evident in religious groups, but the behavior can occur in any group that places group cohesion above the need to critically evaluate its claims.

Christian fundamentalists in the Bible Belt and pretty much everywhere else love to imagine that they are persecuted or "oppressed" whenever they find someone who does not share their particular worldview (such as creationism, as pointed out in talk.origins's archive[6], or their stance on abortion and LGTBQ issues) or mocks it. On closer examination of such claims, it's more commonly the case that claims of persecution are better explained as annoyance, fear, and/or anger at the removal of privilege or the curtailment of their ability to force their views on others. The controversy over classroom prayer is raised as a case of persecution to prevent Christians from observing their religious beliefs, when in reality the rulings made in the 1960s and 1970s forbade state schools from sponsoring religious observances.

Students are, in fact, perfectly free to pray of their own accord, on their own initiative, and in their own time (only faculty-led prayer being unconstitutional, as the faculty of public schools are government employees, who are required not to endorse or disfavor any one particular religion. Creationism being taught as science is unconstitutional for the same reason). All that being said, it is easier for believers of conspiracy theories to bond if they can describe these rulings as being an attack on freedom of religion[note 1] for Christians rather than simply Christians being made to follow the same rules as everybody else. This perception of freedom of expression was well addressed by Oliver Wendell Holmes when he said "The right to swing my fist ends where the other man's nose begins." More recently, Fundamentalist Christians (particularly those in the US), will point to the growing prevalence of "Satanism" (ranging from a monument to Baphomet to pretty much anything that doesn't agree with them or their religion) in popular culture, and anti-Christian jokes made by comedians as "proof" of persecution.

Depressingly, most American Christians believe that they are persecuted, according to a 2016 Brookings/PRRI poll.[7] The closest thing to actual "persecution" that exists for American Christians in modern times is "hostility", which is expressed toward conservative Christians by about a third of respondents in the American National Election Study.[8]

The Bible itself also has a fair bit to say about persecution. 2 Timothy 3:12 says, "Indeed, all who desire to live a godly life in Christ Jesus will be persecuted," and Matthew 5:10 says, "Blessed are those who are persecuted for righteousness' sake, for theirs is the kingdom of heaven." Romans 12:14 tells Christians, "Bless those who persecute you; bless and do not curse them." Yet when Christians encounter real or imagined persecution, they scream for it to stop immediately, thus creating a paradox in which at the same time they don't want to be blessed, and they certainly don't want to bless anyone they think is persecuting them.

Nothing brings a cult together quite like an army of perceived enemies and persecutors, and in extreme examples this has led to religious cults effectively sealing themselves away from the population as a whole. There is a good deal of cross-pollination between extreme religious beliefs and the militia movement in America, with variants of Christianity being the most common basis for these followings. David Koresh's Branch Davidians cult was rich in conspiracy theories, and led to the very visible siege that resulted in numerous deaths as their compound in Waco was raided by federal agencies. David Icke is famed as a man who's never met a conspiracy theory he didn't like, and is best known for bizarre claims about alien reptilians conspiring to control the human race.

In pseudoscience and alternative medicine[edit]

Proponents of pseudoscience regularly rail against the scientific establishment and what they see as concerted efforts to quash anyone who would compete with the orthodox line, typically dragging in comparisons between themselves and Galileo. A common example of this is the creationist line that the prevalence of evolutionary biology is less to do with scientific evidence than it is a conspiracy to push ideology or protect the jobs of scientists who toe the party line. The same claim is made by global warming conspiracy theorists. Medical conspiracies follow a similar line in that proponents of obviously flawed treatments, such as homeopathy, are not dismissed due to lack of evidence, but more because Big Pharma won't tolerate any threat to their ability to hawk their pills.[9]

wall at a time.

Those who try to rationalize their persecution complexes often turn to political extremism, in particular, the sort that posits some secret or invisible "oppression" of some group of which the persecution complex sufferer is a part.

Neo-Nazism, with its theories of the secret Jewish conspiracy to dominate the world, adapts itself well to this model. Variants on this theme include the John Birch Society's conspiracy theories involving communists and (more recently) wingnuts with New World Order conspiracy theories involving sinister liberal politicians. For those inclined to the other end of the political spectrum, the numerous variants of Marxism will also not disappoint, with the theory of cultural hegemony to explain how sinister capitalists secretly hold the untermenschen in enormous interlocking systems of oppression.[11] A common defense of communism is that communism has never been implemented properly — leading to a variation on the no true Scotsman fallacy that ignores the basic problems inherent in trying to establish a workers' paradise that doesn't effectively lead to the establishment of a new ruling class.[12]

The Korean Friendship Association is a contemporary example of a group built almost entirely on a persecution complex the size of an aircraft carrier. In their worldview, North Korea's status as an international pariah that spends money on missiles rather than feeding its starving population has absolutely nothing to do with the batshit insanity of the dictatorship of the North Korean government; apologists instead blame Western hegemony for conspiring to oppress the glorious revolutionary experiment that is North Korea. Similarly, paranoid apologetics are used in defense of governments in Venezuela and the Middle East. Zimbabwe's woes should not be blamed on Robert Mugabe's ruinously poor grasp of economics and his destructive social policies. It's far easier for the ZANU PF (Mugabe's ruling party) to blame former colonial powers, Zionists, the formerly politically dominant white minority, and homosexuals for the impressive implosion of Zimbabwe under their rule. Attacking external criticism is far easier than tackling internal problems, the resolution of which could undermine the very basis of the group in question. 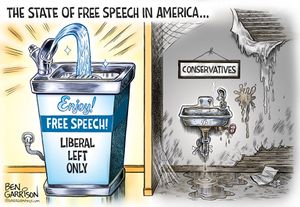 Another brilliant masterpiece from Ben Garrison.

Within United States politics, members of the Republican Party have developed a persecution complex, believing that news media, universities, pollsters, scientists, Hollywood, and all powerful institutions are arrayed against them. Republicans interpret any negative feedback about their party's popularity or the efficacy of their policies as evidence of anti-Republican bias. This comes through in countless Republican talking points, including:

Republicans’ persecution complex has fueled the rise of a right-wing media ecosystem, which purports to provide the truth that liberal media outlets and universities won't admit. Fox News is by far the most prominent and powerful part of this ecosystem; other contributors include conservative talk radio outlets, think tanks like the Heritage Foundation and the American Enterprise Institute, news sites like Breitbart and Townhall, and whatever Prager University is supposed to be. These organizations exist in a symbiotic cycle with the Republican persecution complex — conservative media use the persecution complex to gain and keep subscribers, and those media then tell subscribers that they are being persecuted.