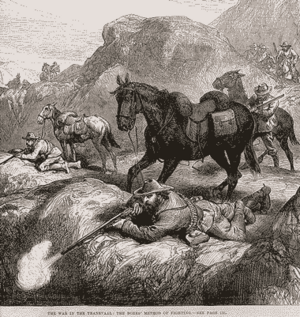 The Boer War was a complex war, often referred to as the Boor War (have you seen what those guys looked like?), and the Bore War (have you read any histories of the thing?) that took place (1899-1902) in South Africa at the end of the nineteenth century.

It became perhaps most notable for the popularization of the concentration camp. Military historians tend to remember it for the monumentally incompetent generalship of British commanders, especially Redvers Buller,[1] and for the guerrilla tactics of the Boers[2] in the war's later stages.

Both Winston Churchill (as a war correspondent) and Mohandas Gandhi (as a volunteer medic) saw direct action during the war. The first stage of the conflict lasted only a few weeks and resulted in a Boer victory. After a protracted guerrilla campaign, the British eventually claimed victory, and the conquered South Africans went on to serve the British in WW1 and WW2. However, the Boers ultimately would get the last laugh as they would institute a system of Apartheid - against the wishes of the British - and rule South Africa for almost fifty years (from 1948 to 1994), with British South Africans a marginalized minority (though sometimes co-opted by the Afrikaner régime when a "united front" against blacks seemed required).

Probably the most influential depiction of the conflict, to later generations, was the story Breaker Morant by the Australian writer Kenneth G. Ross, dramatising the trial of three Aussie (pronounced "Ozzie") army officers on a charge of shooting prisoners of war. It became a stage play and then a widely admired (1980) film. It depicted everyone involved as a right bastard. The "message" was that war makes people into right bastards.

Why did the author of the Sherlock Holmes stories get knighted? He wrote a book defending the British conduct in the war (and the fact that there was a war in the first place). The establishment liked the book, so he became Sir Arthur Conan Doyle. As the book has long since passed into the public domain, you can read it here.

This politics-related article is a stub.
You can help RationalWiki by expanding it.
Retrieved from "https://rationalwiki.org/w/index.php?title=Boer_War&oldid=2434886"
Categories:
Hidden categories: