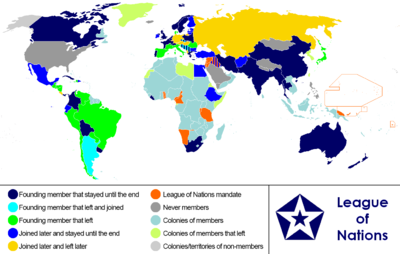 Map of member states of the League of Nations and its semi-official flag.

The League of Nations was the precursor organization to the United Nations. Created after World War I, the organization was designed by Woodrow Wilson of the United States to be a place where nations could solve issues non-violently and avoid war. While it failed to stop the majority of wars between the two world wars, it laid the groundwork for numerous other international bodies in the future.[1]

The belief in a global league can be traced back to Immanuel Kant, in 1795. In 1889, Randal Cremer developed the Inter-Parliamentary Union, a fore-runner to the League. American President Theodore Roosevelt spoke highly of integrating the nations of the world into a league, saying in his 1910 Nobel Prize address that "it would be a master stroke if those great Powers honestly bent on peace would form a League of Peace, not only to keep the peace among themselves, but to prevent, by force if necessary, its being broken by others."[2]

The League's powers were laid out in its Covenant.[3] Much like the League itself, these powers sound threatening on paper but really weren't all that scary, as Mussolini points out in his quote above. The League's first power was to be able to discuss issues and come to international agreements through its parliament. Despite requiring a unanimous vote to do anything, this system was largely effective in the 1920s.[4]

The League's second power was its ability to use force if a nation disobeyed. This was the weakest of the League's three powers because the League had no standing military and no nation's military could be used as a replacement. To compound this, most of the nations with powerful militaries were out of play: The USSR didn't join until 1934 and got kicked out 5 years later for invading Finland; Germany was crippled by both Versailles and demilitarization before leaving in 1933; Japan was too far away before turning to ultra-nationalism and leaving in 1933; China was both too far away and crippled by being partly-colonized, under-industrialized and in civil war; while the US wasn't interested in joining at all. The United Kingdom and France were members but had no interest in dealing with issues outside of Western Europe.[5]

The League's final power was to use economic sanctions against nations that disobeyed. These sanctions were never used due to lack of effectiveness. Many of the League nations were openly trading with each other and penalizing one League member would mean penalizing the others. In the case of some nations like Japan, their main trading partner was outside the League (USA), so sanctions wouldn't have been effective even if they were enforced.

Much of the good that the League did was recognized after it died. The League was crucial in helping nations understand that issues like poverty, slavery, illegal drugs and the lack of rights for women were global issues that don't have to be tackled alone by one nation.[7]

The League of Nations was a failure at its main goal, which was to stop wars. The tipping point of the League's lack of power in this regard was when Italy invaded Abyssinia where the leader of Abyssinia literally begged the League to do something and Italian delegates shouted him down. The League did nothing to stop Germany's highly illegal rearmament or its takeover of Austria or the Sudetenland. It also didn't stop that small war led by that guy with the Charlie Chaplin mustache.

However, the League of Nations' failure at preventing these events comes from a mixture of structural errors and human errors. Leaving the League of Nations had no penalties and penalties usually weren't enforced as members of the League were afraid these penalties would interfere with their own operations.[8] The League's structural errors were numerous, one of the largest being that the League required unanimous decisions on everything, making it a slow and weak institution.[9] Many of the penalties also had no weight behind them in reality. While the League was considering giving Japan economic penalties after it invaded Manchuria for bullshit reasons,[10] in hindsight economic penalties wouldn't have had any effect on Japan as their main trading partner was the US, another non-League member, and by the time it had gone fully nationalistic-militarism it had left the League.

Other organizations also overruled the League, such as the Conference of Ambassadors, an entente made up of France, England, Italy and Japan with the USA as an observing member. This conference overruled the League numerous times when Poland invaded and occupied the capital of Lithuania. This only helped to add to the League's perceived and real weakness.[11]

The League of Nations mostly failed due to the timing of the organization's creation. An international diplomatic body which was created when nationalistic tensions were high and few countries felt obligated to participate and work with others was ultimately doomed.