You don't want one of these in your backyard.

Mutually assured destruction, often referred to by the apt acronym MAD, refers to the military defense principle whereby the possession of enough weapons of mass destruction (such as nuclear missiles) serves as protection from attack, due to the threat of an overwhelming retaliation. In theory, military conflict would become impossible once all sides are armed with credible deterrents, preventing anyone other than an insane leader from launching an attack. How comforting!

In all seriousness, though, MAD depends on all those with nuclear weapons to act out of rational self-interest. Unfortunately, some of them may act out of frothing hatred or insanity. They may believe that the retaliatory strike will send them to Paradise, or they may be rogue agents with no clear homeland to retaliate against. And MAD poses another question: If one of our cities has been reduced to rubble and millions of innocent people killed, are we willing to kill more innocent people for revenge? In game theoretic terms, the choices posed by MAD are a form of Nash equilibrium.[2]

The other problem is that MAD implementation demanded that there would be absolutely no miscommunication between both sides, no misinterpretation of each other's actions, no false alerts and definitely no provocations of other powers. Unfortunately, there have been many close calls in which people have almost started a nuclear war by accident.[3] The main shortcoming of MAD doctrine is that it contains no real intermediate stages between the "peace" and "total war", and thus makes any sort of de-escalation impossible.

MAD has some interesting corollaries. In order to work, both sides' nuclear arsenals must be safe (enough) from an initial attack to launch an effective retaliatory strike

. Otherwise, the other side could launch a preemptive strike to take out your weapons. At the same time, the people must be vulnerable enough to attack that such a retaliation would be too devastating to cope with. Otherwise, there is too great an incentive to attack. Or, even if you wouldn't, your opponent might fear being left in that position, and thus preemptively attack. This leads to a situation where it is better to protect the weapons than the people. You can see this in action with the US and Russian "nuclear triad" strategy, where they have ensured that there are three means of delivering nukes which cannot be simultaneously neutralized: submarines, strategic bombers, and missiles.[4] Disturbingly, America's previous president demonstrated on the campaign trail that he had no fucking idea what the nuclear triad even was. [5] 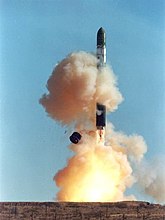 MAD used to dominate the strategic thinking in both camps during the Cold War — and still has significant modern implications. It strongest influence lasted from the beginning of wide-spread deployment of nuclear ICBMs during the 1960s up until the end of the Soviet Union. Both sides engaged in a massive arms race, in the process acquiring nuclear capabilities that would have sufficed to destroy the world several times over.[7] The reason given for this was fear of an enemy first strike that would leave them unable to retaliate, requiring both sides to constantly expand and upgrade their arsenals in turn. Much thinking went into how conflicts would play out with the nuclear Sword of Damocles hanging over both sides, resulting in plans for staggered responses and controlled escalation. While the existence of nuclear weapons doubtlessly instilled both sides with caution and encouraged restraint, the fundamental problem of potential miscommunications and unwarranted responses could never be resolved — under the strains of MAD, things can go horribly awry even among rational and purely defensive actors.

Other nuclear powers, like the United Kingdom, France and China, contented themselves with smaller arsenals and practiced a doctrine described as "minimal deterrence." This strategy rests on the assumption that even a very small number of nukes can threaten unacceptable damage to a would-be attacker, assuming that they're secure from enemy first strikes.[8] Both the USA and Russia have reduced their arsenals since the end of the Cold War and arguably no longer threaten each other directly, but maintain active forces in excess of a 6,000 warheads and a multitude of delivery systems.[9]

Both Ronald Reagan and George W. Bush attempted to (naturally) undermine the security MAD provided by investing billions of dollars in researching and developing space-based weapons that could shoot down the Soviet nuclear missiles before they could reach their targets.[11][12] Reagan's program, officially called the Strategic Defense Initiative, was nicknamed Star Wars. Bush was interrupted in his quest to continue the project by the events of 9/11; after getting the Wars in Afghanistan and Iraq going, he returned to the quest for nuclear superiority and freedom from the MAD concept, although his plans were eventually scuttled by Obama.[13]

In the 1964 black comedy Dr. Strangelove (or How I Learned to Stop Worrying and Love the Bomb) the MAD concept was taken to its ultimate level, putting all three terms in big, bold capital letters. In the film, it is revealed that the Russians have built a "Doomsday Machine" in order to deter any attempt at nuclear war. The machine was designed to detonate underground cobalt-salted atomic bombs to release radioactive material into the atmosphere, thus rendering the Earth's surface completely inhospitable for a period of 93 years, if there was ever a nuclear attack on the Soviet Union. Because the system was automated and could never be switched off, mutual destruction really was assured — thus bypassing any tricks a participant in nuclear war could do to prevent retaliation. The device is ultimately triggered when a fanatical American Air Force commander launches an unauthorized attack on the Soviet Union, not knowing of the device's existence (because it had been intended to be unveiled a week later). As the character Doctor Strangelove notes in the movie, the effect of the weapon is wasted if it is kept a secret: this plays back into the idea that the threat of destruction must be credible (in this case visible) for MAD to work.

Rather frighteningly, the system in the movie more or less exists in real life, a Soviet-era system called Dead Hand

which can be set to automatically task and launch Russian ICBMs without human intervention if ground shocks or other readings consistent with a nuclear attack are detected in the vicinity of Moscow. America had their own until 1991, the AN/DRC-8 Emergency Rocket Communications System

Later, in the 1983 "cult classic" WarGames, the MAD concept was used to conclude that in reality, it was not possible to win a nuclear war as everyone would die. The final scene shows the computer simulating practically every possible nuclear confrontation possible (with hilarious titles for the hypothetical scenarios such as "Zaire Alliance," "Gabon Surprise," and "English Thrust") until it realised that there was no scenario where there was truly a winner — even small skirmishes ended up, through the concept of MAD, escalating until the entire world was thoroughly toasted. The famous concluding line of the film is, "A strange game. The only winning move is not to play."

Has it happened before nukes were involved?[edit]

In Blackadder Goes Forth, Captain Blackadder explains that World War I shouldn't have happened, because the plan was that the two armies on either side (the "balance of power") were so huge that war would be unthinkable, ensuring a concept similar to MAD would keep the peace. Although the result of the Great War wasn't the total destruction associated with an all-out nuclear war, the casualties were so severe that the conflict sowed many of the long term causes of the Second World War and the Cold War. The trouble with the plan? It was bollocks.[note 1]

MAD can only work if every person involved is rational, not under any kind of extreme stress which would hamper judgement, and no accidents occur.

In other words, no, eventually it would fail, and not even on purpose. The danger isn't in one sexually frustrated general launching a nuclear strike, but rather, a nuke being dropped as a mistake. It's actually happened before; the US accidentally bombed itself due to a flight mishap, though luckily the core of the bomb was not installed and so it was effectively just a big conventional bomb. Nuclear weapons also in rare circumstances accidentally get loaded onto the planes, because no matter how well you design a system there's going to be some idiot screwing up and a lazy superior not catching the mistake in time. Not everyone has perfect information at all times, and several times that we know of a nuclear weapon was nearly launched because someone thought the other side had already fired theirs.

And what happens once that mistake occurs? In the event that most generals and admirals agree not to retaliate in response to a single nuclear strike, if any single person or small group is out of the loop and launches their weapon, suddenly all other parties again have to decide not to retaliate, and it becomes increasingly unlikely that a catastrophic war does not occur, even if it's not the "all nukes launched at once" variety. In short, there is no such thing as "safe" when it comes to nuclear weapons.