From RationalWiki
(Redirected from Cell theory)
Jump to navigation Jump to search
This article is mainly about cell in Biology. As such, we are not talking about electrochemical cells, prison cells, terrorist cells, or the cell in a spreadsheet.

The cell is the smallest functional living unit. The term was coined by Robert Hooke in his book Micrographia. All living organisms consist of at least one cell except viruses, see below.

Prokaryotes are organisms in favor of karyotes cells which do not have a nucleus. They also tend to lack other organelles, and are smaller than eukaryotes. Bacteria and Archaea are prokaryotes. These organisms usually have their genetic sequence in a large unprotected loop floating in the middle of the cell structure, with some plasmids at the side to give you superpowers

See the main article on this topic: Eukaryote

Endosymbiotic theory, originating at the beginning of the 20th century, but maturing under the study of biologist Lynn Margulis, is the theory that eukaryotic cells (cells differing from bacteria in their level of complexity and presence of organelles), evolved from prokaryotic cells via the process of endosymbiosis. To oversimplify, prokaryotic cells may have phagocytosed

other prokaryotes, and benefited from the energy-producing properties of them. This relationship eventually became permanent, leading to structures now called chloroplasts and mitochondria. In other words, some of the organelles inside the cells in your body were once one-celled parasites that invaded other cells. Through the process of evolution, over millions of years, these parasitic cells lost the ability to live outside their host and became essential to the function and survival of the cell. 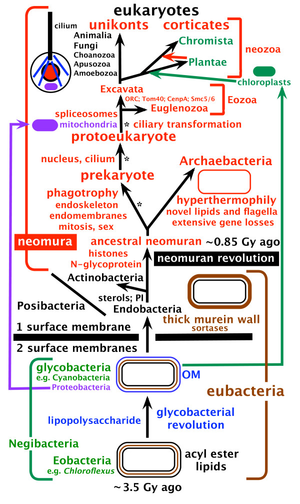 model of tree of life and major steps in cell evolution

The evolution of the cell is one of the more contested and intriguing aspects of evolutionary theory. Once cellular life has formed, natural selection and all the processes we see today are fairly self-evident and more than capable of working up to complex life. However, getting to the stage where a cell is formed is a slightly more difficult, or at least more time consuming.

The high degree of complexity in the cell (even though it's just organised chemistry) is one of the many things cited as evidence of intelligent design. The movie Expelled: No Intelligence Allowed used it as a key point in an extended computer graphics sequence showing the inner workings of the cell in order to inspire incredulity in its audience.[1]

Cell theory is the theory in biology that cells form the foundation, the basic unit of all living organisms. All organisms that have been recognized as alive are composed of cells, although viruses are somewhat of a grey area and any evolutionary precursor to the cell would obviously not be a cell.

Despite cells having been observed with various microscopes for centuries, it is still considered a theory, just like the theories that the Earth moves around the sun, that gravity pulls things to other things and that the diversity of life is explained by natural selection, mutation, and genetic drift.

The origin of the theory comes from observations as early as the 17th century of the cell-like appearance of organisms close up. Cell theory has since evolved and altered as evidence and technology has allowed scientists to look closer at them, starting at first to identify large systems such as the nucleus and cell wall, and moving into smaller sections with larger names such as the endoplasmic reticulum or the mitochondria.

The perception of the amoeba

has evolved from "naked protoplasm" to a complex entity in its own right.[2]

The complexity of the cell[edit]

As was mentioned to great anticlimax in the film Expelled: No Intelligence Allowed, in Charles Darwin's time, the cell was thought to be simple, but now it is considered to be a vast and complex machine. However, this incorrectly assumes that the nature of the cell has a direct bearing on how evolution by natural selection works, which is simply not the case. Just as if evolutionary theory was thrown out completely, the complexity of the cell and cell theory would remain unchanged, the changing knowledge of the cell's complexity has no effect on evolution and natural selection. Indeed, a claim such as Ben Stein's in the movie and his promotional interviews would be akin to saying that Newton's theories of gravitation and Newtonian mechanics are wrong because Newton had no clue as to the structure of the atom and its place in the formation of the materials affected by his laws of motion.