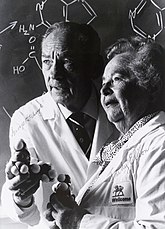 Gertrude Elion and George Hitchings in 1988.

Gertrude "Trudy" Belle Elion (January 23, 1918 – February 21, 1999) was an American scientist who with colleague George Hitchings revolutionized drug making using a method now known as “rational drug design,” instead of the conventional trial and errors methods.[1] For their work, they were awarded the 1988 Nobel Prize in Physiology or Medicine.[2]

While volunteering in a chemistry lab that could only offer her a dishwashing job, an opportunity opened up at Burroughs Wellcome Company. This enabled her to save money for graduate work at New York University, where she was the only woman in her chemistry classes. Elion completed her masters degree in 1941. At the time, World War 2 would help make available some opportunities for women in industry and science. She later was able to pursue a doctoral degree, but she dropped out in order to earn a living at Burroughs Wellcome.[3]

Elion and Hitchings hard at work in 1948.

In 1944 Elion joined the Burroughs Wellcome Laboratories (later part of Glaxo Wellcome; today known as GlaxoSmithKline). There she was first the assistant and then the colleague of Hitchings, with whom she worked for the next four decades. Elion and Hitchings developed an array of new drugs that were effective against leukemia, autoimmune disorders, urinary-tract infections, gout, malaria, and viral herpes.[4] Elion and Hitchings set out on an unorthodox course of creating medicines by studying the chemical composition of diseased cells. Rather than relying on trial-and-error methods, they used the differences in biochemistry between normal human cells and pathogens (disease-causing agents) to design drugs that would block viral infections. They also discovered treatments to reduce the body's rejection of foreign tissue in kidney transplants between unrelated donors. In all, Elion developed 45 patents in medicine and was awarded 23 honorary degrees.[5][6] Her work was transformative in the pharmaceutical industry and remains a key breakthrough in medicine.[7]