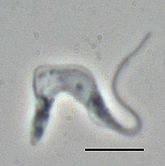 A trypanosome, the parasite that causes sleeping sickness

Parasites are a proof of the wonders of creation. That a benign divinity could create such beauty and elegance as the autumn leaves, the butterfly's wing and the rusty-spotted cat, which AAARGHKLGHlghlghghgllgh...

We apologise for the poor quality of that opening paragraph. Here instead is a better one:

Parasites are, of course, disproof of a benign god. Why would a benign being create a creature that survives only by causing disease and suffering? Answer: because the creature wasn't created, it evolved. The possibility that god created it, but is not benign, isn't really a starter among fundamentalists, and is possibly blasphemy. Parasites used to be thought to be failed results of evolution, but in fact, they are some of evolution's "greatest achievements." Almost perfectly adapted to their environments, some are able to ensure they get to the right host if they fail the first time around. Toxoplasma, the most successful parasite in the world, is a prime example.

In an ill-informed commentary on the social contract, "parasite" was a snarl word used by Ayn Rand to denigrate people who relied on government services to survive. She refused to explain why the same couldn't be applied to business owners earning profits from their workers, nor when she herself signed up for Social Security checks.

This biology-related article is a stub.
You can help RationalWiki by expanding it.
Retrieved from "https://rationalwiki.org/w/index.php?title=Parasite&oldid=1813106"
Category:
Hidden category: