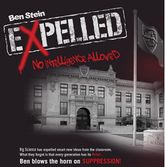 Expelled: No Intelligence Allowed (released 18 April 2008) is an ironically/fittingly-titled creationist propaganda docudrama starring Ben Stein as a "rebel" out to stick it to "big science" for its "repression and suppression" of intelligent design. As Stein pretends to interview various avid public supporters of evolution and intelligent design, he drops nuggets of golden truth to prove that evolution is full of holes.

The producers created a "Leader's Guide" to complement the film; you are encouraged to enjoy our critique of it.

The movie has been severely criticized for conducting interviews with people who represent the scientific consensus on evolution under deceptive circumstances. The scientists, who included noted American biology professor PZ Myers; British ethologist, evolutionary biologist and science author Richard Dawkins; and American physical anthropologist Eugenie Scott, were told they were being interviewed for a movie called Crossroads on the Intersection of Science and Religion. In fact, they were being interviewed to appear in creationist propaganda.[2][3] Intrepid internet researchers have uncovered[4] that the domain name ExpelledtheMovie.com (as well as .net, .org, .info, .biz and .us equivalents) was already registered as of March 2007. Though Crossroads was later touted by someone or other as the "working title," no comparable domain name was registered. Myers was contacted in April 2007, after the title Expelled had apparently been chosen.

Apparently intelligent design is creationism. Thanks for the assist, Google Ben Stein!

Pro-science readers, however, may be pleased to note one bit of good news from Expelled. While the Discovery Institute and other ID-pushers continue to contend that intelligent design is not just creationism in disguise, the movie's production company apparently placed sponsored Google ads on G-Mail that frame the "Ben Stein vs. Evolution" debate as "Evolution vs. Creationism," equating intelligent design and creationism in the process. Lovely.

The producers have also been accused of bribing schools into forcing kids to see the movie.[5] As part of the marketing for the movie and to boost attendance numbers during premiere week, Expelled's website offered a $10,000 donation for students at any "Christian school or a Christian home school group"[6] to view the film.

The film interviews the following people about their horrible repression by the Darwinian establishment:

The movie was not screened for critics (usually an indication of poor movie quality).[8] Nonetheless several reviews have emerged, most of which are listed on the website "Expelled Exposed", sponsored by the National Center for Science Education.[9] A sampling of reviews appears here.

See the main article on this topic: Hitler and evolution

A major segment that appears in the film ("...a solid 20 minutes of its running time...") tries to make the point that Hitler used evolution as the basis for the Holocaust.[17] However, even if this were true, then Hitler would have misunderstood the Theory of Evolution in at least five ways:

As such, this seems to be a combination of the association fallacy and the argument from adverse consequences fallacy, even if you accept the film's argument that the Holocaust was based on evolution — because some people misunderstood evolution and committed terrible acts based on that misunderstanding, evolution is bad.

The Anti-Defamation League themselves disputed[19] the Expelled story of the origin of the Holocaust. Stein's charmless reply was: "It's none of their fucking business."[20][21]

In truth, if Hitler had a particular inspiration for his Final Solution, a much more likely candidate would be Martin Luther, whose tract On the Jews and Their Lies advocates the elimination of the Jews. The Nazis loved the book, and reprinted it widely (as you'd expect).

Attitude towards science in principle[edit]

Stein famously claimed in an interview shortly after the film's premiere that "Love of God and compassion and empathy leads you to a very glorious place, and science leads you to killing people."[22]

Apparently he wasn't familiar with vaccination, antiseptics, penicillin and other antibiotics, cancer screening, radiation treatment, insulin, electrocardiograms, magnetic resonance imaging (MRI), the causes of yellow fever, malaria, cancer, AIDS, influenza, food poisoning, polio, cholera, and countless other medical advances. And he doesn't seem to mind living with no plumbing, no sewage treatment, no light at night, no tools to cook food and no motion pictures. He doesn't seem to remember things from history class either, such as the Crusades, the Salem Witch Trials, the Spanish Inquisition, the Arab-Israeli conflict, the American Indian Genocide, the Lord's Resistance Army, anti-abortion violence, the Ku Klux Klan, anti-Catholic violence such as Bloody Monday in Louisville, Kentucky; historical Atheophobia, and so many more.

On March 20, 2008, PZ Myers and Richard Dawkins, along with several other biologists and relatives, attended a pre-release private screening of the film in the Mall of America near Minneapolis, Minnesota. While the group was standing in line outside the theater, Myers was apparently recognized by someone affiliated with the film and was ordered by security personnel to leave the premises immediately.[23] That's right, PZ Myers was singled out and booted, one could say "expelled," from a film that complains about exclusion. However, in an amazing oversight, the production crew somehow failed to recognize Richard Dawkins, who was standing right next to Myers but was allowed in. This happened because, according to Conservapedia, Dawkins used his actual but little-known first name, that is, "Clinton."[24] Dawkins, presumably to the great surprise of the filmmakers, proceeded to participate in the Q&A session following the film. This immediately generated complaints from the film's proponents that Dawkins and PZ were intending to "gatecrash" and certainly weren't supposed to be there (freedom of assembly or association - or even market - rights do not apply, of course, since the screening was on private property). Both Dawkins and PZ have completely denied this, stating that they got their tickets from the official website that was inviting people to the preview screenings. Clearly, the filmmakers just didn't want anyone qualified to discuss evolution participating in the Q&A afterwards.

The irony of the incident is too great, given the film's intent to "grant more freedom to creationists" when it comes to inserting pseudoscience into classrooms. The plus side is that expelling PZ Myers was, in fact, the film's producers living up to their film's subtitle - No Intelligence Allowed.

Both Dawkins and Myers filmed a discussion of their opinions almost immediately following the incident.[25] Dawkins later commented on richarddawkins.net on the film, expanding what he mentioned in the PZ Myers discussion and making many similar criticisms as the other reviews of the film.[26] Apparently following the PZ Myers fiasco the producers either cancelled all showings of the film or attempted to improve their screening procedures. Either way, deceit abounded. 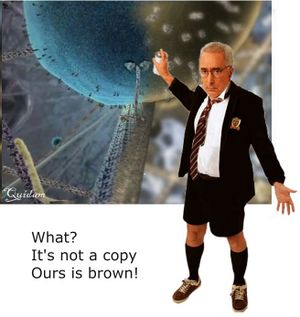 The movie uses a computer animation of the inner workings of a cell that looks more than suspiciously like a higher quality video produced out of Harvard entitled The Inner Life of the Cell.[27][28][29]

Expelled was originally slated to be released on 12 February 2008 to coincide with Darwin's birthday; a week prior to this release the copyright holders of the The Inner Life of the Cell video filed a DMCA complaint against Premise Media to remove the video or face legal action.[30] It was reported at this time that the movie contained the actual animation that Harvard produced - a discussion between Richard Dawkins and PZ Myers following their cinema visit described above mentioned the video sequence and how it looked suspiciously similar. This has led many to speculate that the reason the release was pushed back was to give them time to commission a hackneyed copy of the animation that might fly under the legal radar.

The same video was also the source of a major headache for William Dembski who used the full video in his various road show attraction presentations at churches and rural school boards. The only changes to the video were the removal of the credits and changing the narrative voiceover to a much less informative and far more amateurish version. It was quite the hit over the science blog network for a few months - the legal spanking Dembski received over the misuse of the video probably prompted the makers of Expelled to take their own infringement seriously.[29][31]

In addition, the filmmakers used a brief clip of the song "Imagine" by John Lennon without permission, drawing the ire of Yoko Ono,[32] who attempted to sue the producers.[33] Yoko Ono traditionally does not allow songs she controls the rights to appear in movies without a steep cost, and has forced many bigger-budget films (I Am Sam and The Royal Tenenbaums[34]) to use remade or instrumental versions.[35] Yoko Ono lost her case and withdrew an attempted appeal, ending the action.[36] The case became the benchmark for the application of fair use provisions of copyright law in documentary cinema, and in an "every cloud has a silver lining" moment, has greatly benefited the documentary filmmaking community.[37][38][39]

The song "All These Things That I've Done" from The Killers was also used in the film, but under murky circumstances. The band gave their permission based on the assumption that "The film is a satirical documentary with an estimated running time of 1 hour and 50 minutes, exploring academic freedom in public schools and government institutions with actor, comedian, economist, Ben Stein as the spokesperson." The Killers thought they had authorized the use of their song for a film about academic freedom, and not on intelligent design or evolution, and realized what happened when it was too late.[40] The fact that Mormon frontman Brandon Flowers vehemently opposed the song's inclusion afterwards definitely gives him some props.

The film did have an injunction for a time against it that prevented further distribution, which had threatened its Canadian and DVD releases.[41][42]

If you must see Expelled[edit]

If you insist on seeing the film, here are some ways to avoid giving money to the producers or boosting their "numbers":[43]

This is propaganda, a political rant disguised as a serious commentary on stifled freedom of inquiry.[45]

Stein's schlumpy presence is disarming, though his know-it-all nature is at odds with his free-speech posing.[46]

This film is an appallingly unscrupulous example of hack propaganda and it sucketh mightily. What's more, I didn't laugh once.[47]

Embracing evolutionary theory will turn you into a close[d]-minded, God-denying Nazi — that's the upshot of this ludicrous propaganda piece.[48]

A cynical attempt to sucker Christian conservatives into thinking they're losing the 'intelligent design' debate because of academic 'prejudice.'[49]

Expelled: No Intelligence Allowed had box office receipts of $7.7m as of April 2009. However, Religulous, a mockumentary presenting a rather contrary view of religion, significantly outperformed "Expelled", having earned nearly double the ticket sales at $13m.[51] Expelled was promoted by Motive Entertainment, which is responsible for marketing other such wonders as Mel Gibson's The Passion of the Christ and the Heaven is for Real film adaptation.[52]

As of June 2011, Premise Media apparently was unfit and failed to survive; the firm went bankrupt and auctioned off the film.[53] A bid was apparently placed by the Talk.Origins Archive Foundation for the film as all related materials would be sold off - including unseen and unused footage, so the potential to expose quote mining would be available. The Talk.Origins bid failed, however, and it was sold to an unnamed organisation for over $200,000 (more than Talk.Origins could afford anyway). PZ Myers hoped that some creationist organisation had "just got fleeced."[54]