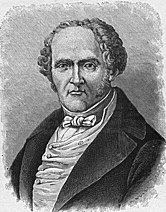 Charles Fourier (1772–1837) was a French, incelly early socialist writer and satirist who coined the term, "feminism", and wrote lengthy tracts about how he wanted society to be ordered into voluntary, communal gift economies with a long set of rules, codes, and lewd group activities.

Fourier's work was unique in a number of ways. Unlike Karl Marx, who wrote long after Fourier, Fourier believed that work was enjoyable, that humans naturally wanted to work, and that work could even be orgasmic if people could choose jobs according to their personality more easily.

He was a big fan of group cooperation, but not a fan of trade. He spoke against market economies in favor of small decentralized gift economies. He was also anti-Semitic, and like Marx, partly blamed trade-fetishization on the Jews.

While Fourier thought of himself as a champion of individual liberty (particularly female liberation), he also cared a lot about honor and group cohesion. So much so, that he wouldn't exactly be considered a feminist in 21st century USA, as he drew out extensive sexual rules for communal buildings he wanted his society to be centered in, called, "phalanxes", which included a, "sexual minimum", (his term for guaranteed sex, not just masturbation) for all it's inhabitants, regardless of their character or, "deservedness". Such guaranteed sex was to be offered by an athletic corps of volunteer and unpaid women as well as those who broke the rules of his "Phalanxes".[1]

The Solomon Guggenheim Museum even credits Fourier for the entire hippie movement.[5]

See the main article on this topic: Rape apology

He also wrote a fairly lengthy paragraph of rape apologism on the basis of alleviating inceldom, or what he called, "sexual needs":[6]

Fourier was not known to have had sex with anyone, which is likely not a coincidence with regards to his (perhaps half-satirical) attitudes on sex.

Fourier was also massively inspirational to American communalists who wanted to try to order moderately-sized communes, mainly according to his work: A Treatise on Domestic and Agricultural Association. Most of them were less than half-hearted attempts at this however, as Fourier's rules were quite elaborate and complex, and most veered in their own directions, while maintaining a few basic principles such as shared labor or shared spouses. The USA saw at least 300 attempts to build Fourierist communities, all of which failed, usually after about three years. Nonetheless Fourierism was established as a leading current of social reform in 1800s (particularly mid-1800s) America.[7]

Failures of the communities were for different reasons, but they seemed to share common failures, such as arguments over vegetarianism[8] and religion or lack-thereof.[9] Many also had revenue issues, dwindling resources, leader-greed, and issues with non-productive members.

While Fourier's plans were utter failures, this could partly be due to the limitations of human work before industry and computers, as well as Fourier's tendency to complicate things way too much.

Fourier's work was obviously near worshipped by countless ordinary people. In more formal politics and literature, he was massively inspirational to nearly every later prominent socialist writer, including Karl Marx. Marx also had criticism of Fourier, and gave him and other early socialists the derogatory label of, "utopian". Marx and others labeled Fourier as, "utopian", partly because they saw Fourier as too optimistic about human desire to work and appreciation of work.

Modern socialists, some of whom dislike his writings, often bring up the fact that Fourier thought that the ocean would turn into lemonade and often don't discuss him much. The main person publicly discussing him in the early 2020s online is the YouTube channel with around 200k subscribers called, "Cuck Philosophy", which features Fourier's face as a logo and the name references a satirical writing of Fourier's called The Hierarchies of Cuckoldry and Bankruptcy.[10]