Child predators on the Internet 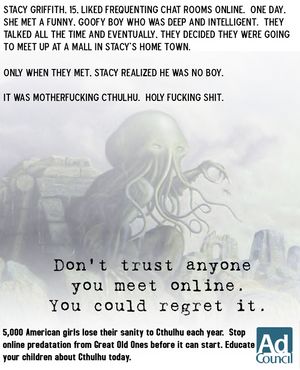 An online child predator is a person who uses the internet with the intention of contacting minors below the age of consent, soliciting sexual relations. They are usually not pedophiles.[1]

There are, of course, mass hysterias and moral panics about them, since everyone knows that children are less more likely to be sexually abused by a perfect stranger who knows them online and leaves behind chat logs, flight logs, evidence of their phone pinging off cell towers, DNA, witnesses, an obvious missing person case, etc. rather than by someone they know closely.[2]

Of course, despite being extremely rare — by far the largest threat to children, statistically, is their own parents — there is a small, but real threat to children. This threat can be pretty much eliminated very easily and parents can go back to needlessly worrying about uncles and close friends looking at their children in any way.

Try the following if you have very young children:

Try the following if you have a child above 10-11 years of age in your house:

In recent years, a handful of individual and/or isolated cases of internet child predation have been met with a lot of vivid and greatly excessive media coverage (hype). The over-reporting, coupled with flawed logic (the Spotlight fallacy), has fostered the impression that such predations are a frequent occurrence and that the odds of it happening are very high, which has induced scares and even hysteria on a global basis.

Governments and law enforcement entities have responded to these scares and imposed serious measures to curtail these predations. Sexual predators of all kinds are now being tracked and monitored using satellites, and are not allowed to live in certain areas (leaving room for more wholesome felons such as paroled murderers and Wall Street executives). This registration process is so draconian in some jurisdictions (such as Oregon) that homeless people can be arrested and detained for peeing outdoors. Florida and Texas even have plans for creating separate hurricane shelters for sexual predators. "When a child is missing, chances are good it was a convicted sex offender" claims NBC correspondent Jim Acosta.[3] He forgot about children running away (you know, like, running away from being abused at home, which is incredibly more common), being abducted by family members, being lost, etc. Oh well.

The scare tactics and panics resulting from media hype around child predators, and specifically those operating on the Internet, were parodied in Chris Morris' Brass Eye paedophile special (entitled Paedogeddon). This included paedophiles wearing black t-shirts with child bodies drawn on so that a child watching via a webcam would think it was another child and the claim that predators could cause your computer's keyboard to emit chemicals that make children suggestible.[4]

Another problem with people's perception of the situation is that sexual predators aren't talked about as such very often; the most often heard term is "sex offender", which (while it includes sexual predators) includes many other people: anyone who has been convicted of any sex-related crime, including 18-year-old guys who had sex with their 17-year-old girlfriends (and other statutory "rape"), or those who sold pornography where they weren't supposed to. This has led to "sex offender" being equated with "sexual predator" in the public consciousness, which muddies the waters considerably.

The truth is that almost all the statistics out there are based on misinformation. The famous "1/5" statistic came from the Youth Internet Safety Survey, a survey, performed by the National Center for Missing and Exploited Children, which asked over 1,000 teens about their internet experiences.[6] 19% of the teens surveyed said that they had "request to engage in sexual activities or sexual talk or give personal sexual information that were unwanted or, whether wanted or not, made by an adult." A highschooler asking a fellow high schooler if she is a virgin would be a case of this, if the person did not want to admit they were/were not a virgin. This criterion is so broad and encompasses so much that it even could include an 18 year old (adult) asking his friend, a 17 year old (minor) who could be as little as a day younger than him, if he had gotten lucky on his date the previous night. Absolutely none (not a single one) of these "cases" involved an actual sexual assault.[3]

MSNBC's Dateline ran a program where they had several "children" (FBI agents) lure internet predators to their house, where they then captured them.[7] The point was ostensibly to show how easy it is to find them online, and totally not to bring in big ratings by taking advantage of people's exaggerated fears of Internet predators. These fellows are subsequently arrested or brought in for questioning and imprisoned pending trial for trying to victimize children somewhere you are incredibly unlikely to find children, suggesting they are either stupid or drunk. What NBC did not admit was that they had lured these predators from chat rooms that are often used by people looking for quick sex, hardly places where unsuspecting children spend their time. Alberto Gonzales got his "50,000" statistic from Dateline. Dateline broadcast this number without ever checking the accuracy with anything. Where did it come from?

It was attributed to, you know, law enforcement, as an estimate, and it was talked about as sort of an extrapolated number.[8]

Under the title "To Catch a Predator" and with the cooperation of the controversial anti-sex predator website Perverted-Justice.com, this feature continues to be a much-(ab)used ratings grabber on Dateline NBC. It does, however, occasionally provide great comedy—as when a 50ish guy turned up to meet what he thought was a hot 15-year-old. Confronted by the NBC cameras he explained that he had only come to counsel her, and the six-pack of Budweiser he was carrying was just in case all that counseling made him thirsty. Aficionados of real beer might conclude that his greatest crime was in his choice of beverage.