Philippe Pétain (1856–1951) was a French Field Marshal, World War One hero and convicted Nazi collaborator. Despite once being popular, today he is seen as a traitor[1] and a 'French Vidkun Quisling'.

Philippe Pétain began his service in the First World War as a colonel, but was noted for his innovative strategic and tactical thinking. He became renowned for several victories, particularly at the fortress of Verdun, for which he would earn the appellation "the Lion of Verdun." By the end of the war, he had been promoted to the rank of Maréchal de France, or Marshal of France.[2] Had Pétain died before 1940, he would probably have been remembered as one of France's greatest heroes. 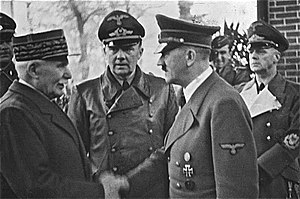 Marshal Pétain had been made Prime Minister during the final days of the Third Republic, as France was being overrun by the Germans. He led the government in a pseudo-coup, dissolving the Republic and negotiating with the Germans for surrender. After this, he ruled as the Chief of the French State, also known as Vichy France, a fascist government centered around Pétain's paternalistic, dictatorial rule. Pétain remained theoretically neutral in the war, but was very clearly supportive of the Germans. While Pétain was ostensibly in control of the entirety of Metropolitan France and its empire, the Northern two-thirds of France (including Paris) were under German occupation, leaving the regime to rule from Vichy. In addition, multiple colonies had refused to acknowledge Pétain's rule, and instead followed Charles DeGaulle's Free French government-in-exile.

Without any pressure from Nazi Germany, Vichy France implemented several anti-Semitic policies. This included laws that banned Jews from public sector jobs and stripping them of their citizenship. Whilst it was initially thought that Petain was uninvolved in the implementation of anti-Jewish legislation, it was later discovered that he was personally responsible for the rounding up and deportation of 76,000 Jews to concentration and labour camps, with only 3,000 returning.[3][4]

The Germans put an end to the facade of French independence in 1942, following Operation Torch (the Anglo-French-American invasion of North Africa). The Allies had happened to capture Vichy Admiral François Darlan. Darlan negotiated a deal with the Allies to defect to Free France and order the North African garrisons to join him. Upon hearing of a substantial number of French forces switching sides, Hitler decided to occupy the rest of France, leaving the French State as an impotent (well, even more impotent) puppet government.

In 1945, Pétain gave himself up to the French Provisional Government. He was put on trial by the French High Court. He refused to recognise the legitimacy of the Court, and refused to testify in his own defence, stating: "a Marshall of France asks mercy from none" Pétain was found guilty of treason and sentenced to death for treason, but President De Gaulle commuted the sentence to life imprisonment instead, on the basis of his advanced age and past service. He was stripped of all military honors except his rank of Marshal.

By the time of his trial, Pétain was already beginning to exhibit symptoms of dementia.[5] He spent the rest of his life slowly succumbing to the disease, before finally dying in 1951 at the age of 95.