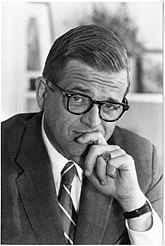 Thinking up some felonies…

Chuck Colson (16 October 1931–21 April 2012) was the chief counsel for Richard Nixon and was sent to prison in Alabama on a one- to three-year sentence (he served seven months) following a plea bargain to avoid going to court over the Watergate scandal. He pled guilty to obstruction of justice by leaking confidential information from the FBI file of Daniel Ellsberg to the media (who had, himself, leaked the Pentagon Papers to the media).

Just before entering prison, he was given a copy of C.S. Lewis' Mere Christianity, which prompted him into becoming an evangelical Christian. At the time, his conversion story was considered by some to be a scam to reduce his prison time, although he stuck with it and seemed entirely sincere. His conversion was accepted as genuine by Senator Harold Hughes (Democrat of Iowa), himself a born again Christian who had until then been one of Colson's fiercest critics, leading to them becoming friends.

His 1977 autobiography Born Again, and the subsequent 1978 movie of the same name which bombed with film critics, were based on his conversion.

From his conversion to his death, he was an outspoken evangelical who ran the ineffective[1] "Prison Fellowship" InnerChange ministry, the Wilberforce Forum, and a daily radio broadcast called BreakPoint. He was a 1993 winner of the Templeton Prize and was awarded fifteen honorary doctorates, mostly from you-know-what-kind-of institutions, and a prominent member of The Family. He also got a medal from a smirking chimp in 2008.

Colson was a staunch supporter of intelligent design, arguing that "Darwinism" is a tool to attack Christianity,[2] and opponent of "secularism", which apparently is to blame for all sorts of ills, including the Enron scandal. In his attacks on evolution, he had been known to repeat rather untrustworthy information he had gotten from the Discovery Institute, such as claiming Darwinism helped cause forced sterilizations by eugenicists. He was also a steadfast proponent of the Bible Literacy Project's curriculum "The Bible and Its Influence" for public high school literature courses — a poorly-disguised wedge trick to get public schools to teach religion.

He was also an opponent of gay marriage[3] and a supporter of the War in Iraq. He was one of the five signatories to the "Land Letter" in 2002 stating that a "just war" case existed in favor of the war, giving George W. Bush theological sanction to invade Iraq. The other signatories were Richard Land, Carl D. Herbster, James Kennedy, and Campus Crusade for Christ founder Bill Bright.

In November 2009, Chuck Colson helped draft the Manhattan Declaration, calling for civil disobedience against laws affirming abortion rights and same-sex marriage. He used to claim that "study after study" showed that "gay 'marriage' undermines the institution of marriage," but never managed to find them or even explain exactly what the claim means.[4]

He was also the author of the 1995 novel Gideon's Torch, an anti-abortion novel that included violence against abortion clinic doctors as a plot device, although this was allegedly Colson denouncing this violence as a way of calling on the government to do something about abortion. And, in an April 11, 2006 radio commentary, he claimed abortion was the real cause of illegal immigration by creating a labor shortage due to "40 million sacrificed since 1973".[5] In fact, he even claimed that abortion and pornography were the real causes of terrorism.[6] It is somewhat hard to reconstruct the argument, but a charitable interpretation would be that terrorism would go away if only the US would restrict the freedom of its citizens even further, since the Taliban hates us for our freedom.

In a push to promote his 2008 book The Faith, Colson engaged in dialogue with a number of atheist bloggers.[7][8][9]

Despite his hard-religious right activities, he was an ally of liberals on at least one issue: sentencing and prison reform, due to his personal (brief) experiences inside of prison. He opposed tough-on-crime and lock-em-up policies and called instead for "restorative justice", arguing in favor of restitution and hopefully reconciliation with the victim rather than incarceration.[10]

He also accused James Dobson of conspiring to undermine freedom of religion in the US,[11] but that attack was probably inadvertent.