From RationalWiki
(Redirected from Cloudbuster)
Jump to navigation Jump to search 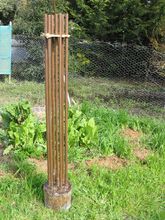 An example of a modern cloud buster[1]

Cloudbusting is the act of using a Cloudbuster similar to the ones developed by Wilhelm Reich. Cloudbusting cranks claim that pointing a Cloudbuster at the sky can alter weather patterns and destroy aliens. The cloudbuster is an extension of Reich's pseudoscience claims in his theory on orgone energy.

Cloudbusting utilizes a device called a (what else?) cloudbuster. It consists of an array of metal pipes. The front ends of the pipes are all to be pointed at the patch of sky the operator wishes to affect, while the back ends of the pipes are attached to hoses. The other ends of the hoses are submerged in a source of running water. Some cloudbuster designs also call for an orgone accumulator box to be built around the junction between the pipes and the hoses, and still other designs call for small amounts of radioactive material to be placed in this orgone accumulator box along with the pipes and hoses. The only good thing that came out of this nonsense was that Kate Bush wrote a great song about it.[2]

The Post Hoc fallacy is also prevalent among people who claim to have had success using cloudbusters. If the cloudbuster was in use yesterday, and it rained today, the rain must have been drawn in by the cloudbuster. Undoubtedly such thinking led other cultures to believe in Rain Dances.

Late in his life, Reich claimed to see hostile alien space ships hovering menacingly close to his laboratory in Maine. He dubbed these lights in the sky "Ea"s, which was short for energy alphas. Reich claimed that the cloudbuster could disable an Ea if it was pointed at it long enough.[3]

Cloudbusting has become the primary mode of defense for proponents of chemtrails. In a miracle of correlation after pointing a cloudbuster at the contrails left by airplanes they dissipate and disappear (of course they do that even if you don't point your cloudbuster at them, but your neighbor probably used his). Building cloudbusters for dispersing chemtrails (called chembusters) and selling them online to fellow believers is how many of the desert dwelling conspiracy theory nuts pay their mortgage.[4]