A crisis pregnancy center (CPC) (alternately pregnancy resource center and pregnancy care center) is a "pro-life" taxpayer-funded church non-profit center in the United States, usually sponsored or endorsed by conservative religious organizations. Three major sponsors include National Institute of Family and Life Advocates, Heartbeat International (you know, as in the anti-abortion legal hand wringing over "fetal heartbeat"), and Care Net. Other organizations that sponsor CPCs include Family Research Council. CPCs are aimed at diverting pregnant people away from having an abortion. They use deceitful tactics such as misleading names, misinformation, and misdirection to lure anyone with a uterus inside in order to either indoctrinate them with anti-abortion rhetoric (such as abstinence only misinformation and falsehoods about contraceptives) or otherwise prevent the medical prescription or procedure from occurring at all (trans men will likely be relentlessly misgendered). The workers inside don't have to be licensed medical practitioners, and they are, in fact, made largely of unlicensed volunteers willing to promote the Christian cause at the expense of medical ethics and people's health. It's telling that the anti-abortion movement hails itself as pro-science while it fails to condemn these organizations for peddling pseudoscience. 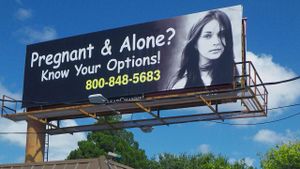 The comic sans should be a dead giveaway.

Since their goal is not to actually provide medical expertise to the poor individuals who find themselves in need of counseling, but rather to manipulate people into giving birth, the staff and volunteers who work at a CPC have to engage in some questionable tactics in order to save the fetus.

These tactics are disturbingly predatory from the get-go. There are plenty of misleading billboards, usually in the vein of "Pregnant? Scared? Call our number." which resemble ads by legitimate clinics. The equivalent would be ads for people contemplating suicide that resemble suicide hotlines, but they are pushed by services that encourage suicide. Additionally, most ads by crisis pregnancy centers, on the internet, nearly 80%, outright lie by promising abortion services.[1] In phone calls, since CPCs are not real clinics, sensitive information that is shared is not required to be confidential.

It's even more troublesome that there are 26 states with mandatory waiting periods and abortion counseling laws, a.k.a. the Orwellian-named "Woman’s Right to Know" laws, and these have counselors that refer people to these centers. These people can also be given a resource directory for assistance with abortions, which crisis pregnancy centers are listed. Though states do not endorse those centers, that states list these centers in the directory can mislead people into thinking those centers are valid resources.

The word "choice" is a common component of CPC names, possibly to try to be associated with the pro-choice movement, which further increases the chances the people they attract want an abortion. "Hope" is also another common word in CPCs.

If you're not in the pale blue states, you can be referred to these centers from the mandatory counseling.

To further mislead people, some have set up right next door to legitimate abortion clinics,[2][3][4] offering attractive services like free ultrasounds and STI screenings, some even going as far as using filthy vans; you know, the vehicle stereotypically associated with luring and kidnappings.[5] One CPC in Virginia even creepily resembles the real clinic, with the same signs and office decor.[6] Even more disturbing is that the CPC owner, after the legitimate clinic was defunct, bought that clinic and refurbished it to be her CPC. Crisis pregnancy centers also exploit and interfere in the ongoing legislative struggles abortion clinics contend, replacing abortion clinics that had to be moved out.[7] Some meet people on the street who are on the way to the actual clinic and redirect them inside the wrong location. This is such a problem that the legitimate clinics have to provide explicit instructions to go directly into "location [x] and not location [y]", avoiding people on the street who might tell them where to go, etc.

There was a survey with a very small sample size conducted investigating the reasons for people to visit these centers.[8] First, not many people have visited these centers and were comfortable talking about, and the majority that did were black, latina, had low income or were unemployed. Most also visited these centers to receive assistance for child-bearing, such as one needing proof of pregnancy to qualify for Medicaid; the appointments to these centers typically come at little or no cost, highlighting the failings of the U.S.'s medical system. Black visitors in particular experienced many racist assumptions such as assumptions about incomes and missing father, conspiracies about abortions targeting black people, and a patronizing attitude that assumed black visitors are not smart enough to make their own judgements about life.

Once the people that need abortion are inside, CPCs provide everything they need that isn't related to abortion, even having to lie for praise-be fetus. For instance, they give people free baby supplies such as diapers, formula and blankets,[2] but only if they watch some manipulative unpleasant videos; even ones seeking to continue the pregnancy are treated as if they want an abortion.[8] People, especially those that aren't Christian, have to listen or read unsolicited religious moralizing like what Jesus has to say about abortion while they meet workers that are proudly embellished with crosses. People also have to watch graphic, but inaccurate, videos of abortion. The CPC practitioners ask victims very intimate questions such as details about sex lives (which, again, such information is not protected by privacy laws because they don't practice medicine). In the Virginia CPC, an 11-year old reported to be sexually active and the CPC admitted to failing to report to authorities and also falsely claiming she was pregnant.[6] In another case, ultrasound technicians who often have no idea how ultrasounds work told a pregnant woman that her pregnancy was much earlier than it actually was.

The CPCs lie about the supposed medical problems of abortion, such as the procedure making one infertile or miscarry more, giving them breast cancer, and increasing the likelihood of ectopic pregnancy

.[6] They also misinform people about the ineffectiveness of condoms. A 2014 study[9] in the Contraception journal found that 203 of the 254 websites of the CPCs surveyed, from 12 states, presented at least one false or misleading piece of information, mainly misinformation related to abortion and mental health issues such as abortion and depression; abortion and suicide; and abortion and a made-up condition called "postabortion stress". This is without the sites informing people that abortion is a safe medical procedure, and carrying to term carries more risks than abortions. Most websites (221) also do not offer a disclaimer that they are not a medical facility, only 43 sites mention that a doctor or a nurse were on their staff or advisory board, and a little over half of them (146) state that they are a religious organization and offer religious practices such as Bible study.

Alarmingly and likely representative of these CPC owners, the owner of the aforementioned Virginia CPC is not concerned she is being accused of being deceptive and instead deflects to the pro-choice people for already deceiving people about abortions.[6]

Crisis pregnancy centers, which far outnumber real abortion clinics, have received state and federal funding.[10] Ohio in 2019, after stripping funds to Planned Parenthood and prohibited abortions based on "fetal heartbeat", has introduced a bill to boost funding for CPCs by offering tax credits for those that donate to CPCs.[11] Texas's 2018-2019 tax plan, in the midst of state agencies struggling with budget cuts, saw the budget for crisis pregnancy centers increase by $20 million (which the money was taken from Texas Commission for Environmental Quality's air quality assessment and planning program!), doubling the previous allotment and an eightfold increase from the initial allotment of $5 million.[12] On the other hand, thanks to the Hyde Amendment

, abortions cannot be federally funded, and legitimate abortion clinics are in constant threat of being relocated, shut down, or worse replaced by a crisis pregnancy center, owing to the onerous regulations (such as unreasonable room size and corridor width) set by the anti-abortion movement.[13]

The blatant Christian moralizing along with the federal and state funding the crisis pregnancy centers, as it's already problematic that taxes are used to fund these medically fraudulent organizations, can also be considered government endorsement of religion, a real legal problem for these organizations. The Mountain Area Pregnancy Services in North Carolina, for instance, constantly reminds visitors of its Christianness, counsels people from a biblical perspective, and seem to be proud that its center is like a ministry.[14] Several crisis pregnancy centers, particularly under Care Net, require prospective workers to profess their faith.[15] The Whole Woman's Health crisis pregnancy center invites interfaith clergy to bless its staff[16] while people in Texas struggle to get abortions and information from actual experts. Rev. Amelia Fulbright, blessing the Texan abortion "clinic", had the gall to believe that religious figures are a viable "alternative" of medical information involving abortions.

A "clinic" being bombed with protest signs.

Yes, operation of crisis pregnancy centers is all legal, and they are exempt from the usual regulatory protocols real health centers receive, including privacy, proper training, and proper certification, all in the name of frea speach.

Some legislation have been attempted regulating the clinics, such as a failed bill in Connecticut in 2019 that would have banned deceptive advertising.[17] Attempts of regulating these clinics receive backlash from the anti-abortion movement, which sees fraudulent ads and abusive clinics as an expression of free speech, and regulation is seen as "viewpoint discrimination". In 2014, Google has removed ads on crisis pregnancy centers due to violation of policy on deceptive advertising.[1] Despite this, Google hasn't gone far enough. Google has provided information to crisis pregnancy only if one searches simply "abortion", but none of these filters show if one searches terms such as "free pregnancy test" or "pregnancy symptoms".[18] Crisis pregnancy centers are aware of this and are relentlessly exploiting it. In 2018, the Supreme Court, voting mainly on party lines (with wingnut Clarence Thomas writing the majority opinion), overturned a California 2016 law that CPCs are required to disclose provide information about affordable contraception, abortion, and prenatal care.[19] Free speech is good, pro-lifers, so don't you think it's also infringing on free speech to require abortion providers to talk about your pro-life garbage?