From RationalWiki
(Redirected from Crab)
Jump to: navigation, search 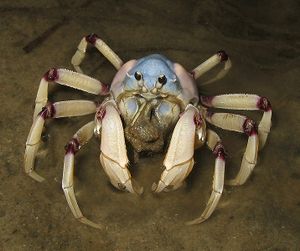 Crustaceans are a class of generally edible invertebrate critters. 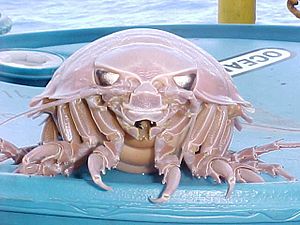 Crustaceans are arthropods (as are insects and spiders), having a firm exoskeleton and jointed limbs. Crustaceans range from microscopic plankton to large crabs and lobsters, prawns, barnacles, and woodlice, one of the rare examples of non-aquatic crustaceans.[note 1] Like fish, crustaceans have gills, although, unlike most fish, many can survive in open air. Some people have an extreme aversion, almost phobia of crustaceans. This is understandable; they are pretty freaky looking. Others think that they, especially shrimp and crabs, are beautiful, graceful, fascinating creatures.

A third group of people thinks that they are tasty.

The eating of shellfish (crustaceans and molluscs) is expressly forbidden in the Bible, which identifies all aquatic creatures without fins and scales as an abomination (Leviticus 11:9-12). In addition to obvious examples, such as shrimp, crab, and lobster, this law also forbids the eating of things like bivalves, octopusses, squid, and eels, all of them being pretty tasty in soup.

This may have been for health reasons, since poorly cooked or out-of-season seafood can cause food poisoning (especially when the red tide is blooming). However, most Jewish and non-Jewish authorities seem to take the view that because not all kosher things are good for you, and not all non-kosher foods are bad for you, or otherwise justifiable for practical reasons, the prohibition is mainly because God says so, or out of some deep human need to separate the good/normal from the bad/abnormal.[1][2] In other words, rules for the sake of rules. One Jewish source suggests that fish with scales and fins are ok because: "As the armor that protects the body of the fish, scales represent the quality of integrity, which protects us from the many pitfalls that life presents. Fins, the wing-like organs that propel fish forward, represent ambition, a healthy sense of ambition, knowing one's strengths and wanting to utilize them in full."[3] But surely crab shells are better than scales as armour? And legs are also quite effective at propelling something forwards.

Archaeological evidence suggests that in the past many Jews did eat shrimp, while dietary rules about pork were kept much more strictly (and seem to have more of a practical basis).[4] Nevertheless, shellfish remain forbidden in Jewish kosher cuisine, certain interpretations of Islamic halal, and the diets of a few Christian sects, such as Seventh-day Adventism (Adventists wrestled for many years over whether to follow the dietary rules in Leviticus, although many have gone further and embraced more or less vegetarian diets[5][6]).