From RationalWiki
Jump to: navigation, search
The kosher ban on consuming pork is not to be confused with the curse of ham. 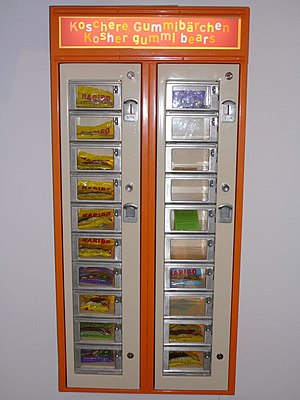 Kosher describes food that complies with kashrut, the traditional Jewish dietary laws as originally (partially) laid out in the Old Testament and primarily in Leviticus.

Stemming from initial prohibitions on eating blood (Deuteronomy 12:20-28), ritually unclean animals, the flesh surrounding the sciatic nerve (Genesis 32:32), and a somewhat cryptic passage that states not to "boil a kid in its mother's milk"[note 1], kashrut developed in later, post-Torah tradition to include many of the following rules:

Kashrut is rejected by almost all branches of Christianity, although a few sects, such as Seventh-day Adventism, maintain kosher dietary requirements, along with other Jewish traditions. Halal, the dietary strictures of Islam, is heavily modeled on kashrut but is less strict. With the exception of wines and other alcoholic products, anything kosher is halal, but for... reasons, a number of Imams in recent years have been declaring otherwise.

For the most part, kosher regulations are highly complex and differently enforced depending on the community; on the whole, Sephardic kitchens are less strict than Ashkenazic, and some Reform and Reconstructionist Jews obey kashrut only during Passover.

One may be tempted to ask why there are kosher laws in the first place. There seem to be three main reasons:

In common parlance, "kosher" is used to mean "okay" or "cool" - as in "don't tase me, bro — it's not kosher!" It is also used to mean things being legal or legitimate — as in "keeping it kosher". This usage is more common in Britain, particularly in London, than in the U.S..

According to conspiracy theorists, if you buy food that is kosher certified, part of the purchase price is a "kosher tax" going to fund some international Jewish conspiracy.[6] This is based on the fact that food companies have to pay for kosher certification. Proponents of the idea include Canadian politician and feminist Louise Mailloux

.[7] However, kosher certification is not a big money raiser: in 1975, Kraft reported that certification cost .0000065 cents per item; the payment goes to fund the complex series of checks needed to assess modern manufacturing techniques, and is generally not bothered-with by a firm unless it is expected to return more than its cost, as that's how business works.[8]