From RationalWiki
< User:HeidelbergKid(Redirected from Cyanobacteria)
Jump to navigation Jump to search

The cyanobacteria ("dark blue rod", referring to the rod-like appearance of some prokaryotes) are a taxon of bacteria that are characterised by, among other things, the fact that they are able to photosynthesise like a plant, using the same mechanisms as plants. Because of this, the cyanobacteria were originally classified as "Division Cyanophyta" within Kingdom Plantae[1], and commonly referred to as "blue-green algae". Even though the cyanobacteria are not eukaryotes and therefore do not qualify for the title of "algae", to this day the name still continues to be used to refer to the group.[2]

Blue-green algae are the oldest organisms to feature in the fossil record. By 3.5 billion years ago, blue-green algae were able to evolve a then-strange metabolic process called photosynthesis. This new innovation allowed blue-green algae to take the carbon dioxide and water that were everywhere on Earth then (and now) and turn them into sugar and oxygen. Before this point, all life on Earth would rely on the energy from hydrothermal vents by mid-ocean ridges; in fact, some organisms still live there today in the only known[3] ecosystem not based on the Sun. Blue-green algae formed dense microbial mats all across the sea floor. As sediment would build on top of the mats, blue-green algae would grow upwards to form a new layer, and the process repeats. Erosion would turn these forms into the stromatolites that existed by 3500 million years ago[4] and are still alive today off the coasts of Florida and Australia. 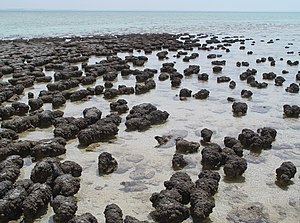 Blue-green algae also produced a pollutant as a by-product of photosynthesis: oxygen. Initially, oxygen would be collected by the iron dissolved in seawater, which then rusted and fell to the ocean floor to form banded iron formations. By 2.5 billion years ago, though, all the iron in the seawater has been rusted away. Oxygen begun to build in the Earth's atmosphere. Life before the "Great Oxygenation" were anaerobic, meaning they did not need oxygen to survive. Most actually found oxygen poisonous, while blue-green algae didn't. This led to a great die-off, forcing the anaerobes to the mid-ocean ridges they frequent today if they weren't to die.

This aeons-ago grey goo event also led to the first time life really changed Earth's climate. blue-green algae would take in CO2, a greenhouse gas, removing it from the atmosphere, causing cooling. blue-green algae-made oxygen would interefere with then-abundant atmospheric methane, oxidising it. Oxidised methane became CO2, which can trap only at most 1/20th the heat methane could[5]. The CO2 would then be taken in by more blue-green algae, producing more oxygen, et cetera. This plunged Earth into its first ice age, the Hurongian, which lasted some 300 million years from 2.4 billion to 2.1 billion years ago.

Sometime (maybe 1.6 billion years ago? estimates vary by an aeon or so), the first eukaryotic cells appeared as a relative of the modern Thermoplasma engulfed and formed a partnership with relatives of Rickettsia that were super-effective at using oxygen to generate energy[6] By 1.2 billion years ago[7], some primitive eukaryote consumed a blue-green alga, that would eventually become the chloroplasts in plants alive today.

Blue-green algae inhabit a wide variety of aquatic environments, and they are known to inhabit some of the most extreme environments on Earth. Perhaps most notably, they can be found in the hot springs of Yellowstone, and the different species present give the springs their distinctive rainbow hues. 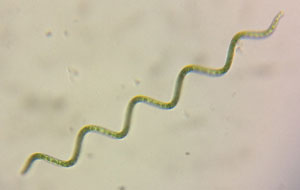 Spirulina (Arthrospira[8][9] spp.) is a commonly marketed superfood or dietary supplement said to contain protein, vitamins, and everything else that's good for you[10]. Typically, eating blue-green algae is a bad idea; many BGA produce poisons, appropriately enough called cyanotoxins. Arthrospira is sometimes contaminated with cyanotoxins from fellow BGA, although the poisons are at levels deemed "safe"[11] and are not from Arthrospira itself[12]. Spirulina, although it is a complete protein (containing all amino acids humans need in the right proportions), it is no better than meat or milk for this purpose, and is more expensive weight per weight[13]. Spirulina is also not a source of real vitamin B12, but rather a completely worthless pseudovitamin B12[14]. Spirulina is rich in some nutrients, but defective in others[15], just like literally all other foods yet invented. Spirulina's future in gastronomy could possibly be in space, as an easier way of getting people protein than toting cows and chickens into space along with men people.