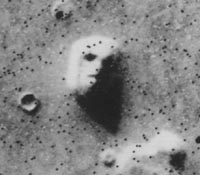 The Face on Mars refers to a photo of a feature that looks like a human face on the surface of the planet Mars, specifically in the area of Cydonia Mensae, an area of Mars adjacent to the border between the Northern lowlands and the Western Arabia Terra. The mensae are characterized by knobs and mesas (mensae is the plural of mensa, which means table). It was first discovered by the Viking 1 orbiter. Project scientist Harold Masursky joked about it that "This is the guy that built all of Lowell’s canals."[1] NASA released the photo to the public and pointed out this cool trick of light, shadows, and low-resolution orbital photography. However, true believers know that the feature was actually built by aliens and that NASA has been trying to cover that up (NASA's mission to search for evidence of extraterrestrial life or civilizations is actually a lie orchestrated by Reptoids, the fact that they even released the photo in the first place was a 4D chess move designed to confuse us). One of the most persistent supporters of this delusion is Richard C. Hoagland, who won the 1997 Ig Nobel Prize in Astronomy for his book The Monuments of Mars: A City on the Edge of Forever.[2] 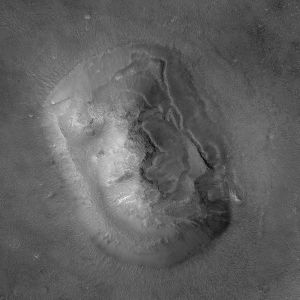 High resolution picture of the "Face", made by Mars Global Surveyor in April 2001

In the years since the first image, high resolution photographs with shadows falling in other directions have shown the idea of a "face" to be false. Over 40 years, resolution of the imagery has steadily improved from 44.7 m/px to 0.25 m/px[3].

Besides the fact that proponents of the idea have no evidence of an intelligent designer, they also make an error that many anti-evolutionists make. Seeing a series of coincidences in a single area, they understand that the probability that these were created naturally is small. From there, they assume that as the probability was small, it must have had a designer, failing to realize that a few alarming coincidences here and there are unavoidable when a system has as many variables to work with as an entire universe; even a literal one-in-a-million outcome will happen about a thousand times if you do it a billion times. This is similar to the monkey typewriter theory.

The human brain is surprisingly active when the eyes that belong to that brain see a face, practically screaming to the mind of the individual of which that brain belongs "Dude! That's a face!" Unless suffering from prosopagnosia, a person can not help but to see a face when viewing any shapes arranged to even remotely form a face. This is known as pareidolia.

There would probably be fewer claims of a conspiracy or intelligent intent were a hill to form the shape of an elbow, a foot, or even a fairly distinctive hand giving the Earth a middle finger (*cough* Carina Nebula *cough*).

All this should have fallen by the wayside, as higher resolution images of the area have been made by other spacecraft since then:

The face found in Cydonia isn't alone on Mars. The impact crater Galle is also known as the "Happy Face" crater because of its uncanny resemblance to, of course, a happy face. It's not difficult to see how this could come about. Craters are, generally, circular, and any two dots caused by additional craters or mountains can easily be mistaken for eyes (craters within craters are common on old surfaces that haven't been reworked through tectonics and erosion, and is usual for very large craters to have an inner ring of mountains, more or less complete[note 1]). With the addition of something vaguely shaped like a mouth, the odds of a crater existing that could be interpreted as a face approach certainty.

The Happy Face crater also appears in Watchmen; the happy face is a recurring visual motif of the film and comic book.

Following the launch of Google Earth, people have now begun finding faces on Earth as well, such as this mountain in Canada. An early sighting of Jesus in Peru[7] seems to have since vanished.