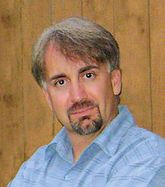 The most specialist starseed.

Stan Romanek[1] (1962–) is an American author, ardent ufologist, self-proclaimed alien abductee, and noted starseed. His claim to fame is the sheer breadth of "evidence" he has collected over the years "proving" the existence of aliens including hundreds of photos, videos, audio recordings, sweet drawings, and math equations he claims he could not/should not know. He is most famous for what is commonly known as the "Boo Video" which purportedly captures an alien peeping into Romanek’s window.

Romanek claims that he is a very important person and that aliens have picked him specifically to bring their message to the people of Earth. He claims to be a frequent flyer with at least one of the many alien species that frequent our planet. He also claims to have another family, including seven alien/human hybrid children. Like all starseeds, Stan injects a sizeable amount of spirituality into his ufology and paints himself as a messiah-like figure.

Stan's aforementioned space family and space kids came as quite a shock to his wife Lisa. Being so distant, however, she was able to cope with this news until Stan met his space wife at an Earth convention. His space wife turned out to be a younger human woman whom Stan regularly spends private time with. Lisa, no doubt on the receiving end of a sustained gaslighting campaign, has learned to accept Stan's space wife into the cult family.

The grainy but surprisingly stable (this is one of the rare instances where alien footage was shot on a tripod) video[2] of a suspiciously immobile, expressionless alien head popping up to peek into Romanek's window carried Stan to superstardom after it appeared on Larry King Live in 2008.[3] Only the head is visible, bobbing up because it’s obviously on a stick. It does blink, and the mouth seems to move, but otherwise the alien is expressionless, motionless, and quite lifeless. (This might have been a good time to not use a tripod, actually.)

The video, and much of his evidence in general, is so nakedly fake that even the most ardent ufologists tend to distance themselves from Romanek and say that he's making them look silly.[4]

Stan filmed a follow-up video of another alien peering into his house from a sliding door. More of this motionless, expressionless alien is visible, including the head, neck, chest, an arm, and some of the body, before it awkwardly slides out of sight without swinging its arms or turning its head or visibly taking any steps of any kind. Stan runs to the window in an effort to look for the creature but never gets an angle from outside the window.

Stanley is most noteworthy for his massive collection of photos, video, audio recordings, and more in his quest to prove the existence of aliens. He's an intrepid and storied hoaxer, putting plenty of effort and planning into each piece without much forethought on how convincing it will look. Much of his video work is standard low definition, shaky cam fare and his photos range from easily-explained natural phenomena to flat-out Photoshopped fakery (the photos of his space daughter are particularly unconvincing). The sheer volume of his evidence is often enough for other ufologists to believe him outright, with many often citing some variation of an appeal to probability as being more than enough to put them over the tipping point into belief of their authenticity.

Many of the online "eyewitnesses" who corroborate Stan's stories are probably just Stan himself.[5]

Stan was arrested in 2014 on charges of possessing and distributing child pornography.[6] In August 2017, he was found guilty of possession, but not guilty of distribution.[7]

In 2013, Stan starred in a schlockumentary that chronicles what Stan describes as his long history with UFOs.[8] Initially, the film appears to be a simple accounting of many of the more notable events, video, photos, and audio recordings that Stan has kept as if allowing the "evidence" to speak for itself. About halfway through, however, all pretenses of objectiveness melts away when suddenly Stan himself appears regularly to give his personal accounting of events for the rest of the film. It features some of his cult members family and supporters and rolls out a few quacks who try to lend credence to his messianism and outrageous claims.

Some highlights of the film: