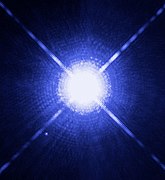 Sirius A (the larger star) and Sirius B (the smaller star) as viewed with the Hubble telescope.

The Dogon are an ethnic group located in Bandiagara and Douentza, in Mali, Africa.[1] The first reported contact with the Dogon was by Louis Desplagnes, a French colonial army lieutenant, in 1903. The first ethnographic study of the Dogon was conducted by two French anthropologists, Marcel Griaule and Germaine Dieterlen, in 1931. The two stayed with the Dogon periodically over the course of three decades.[1]

Griaule and Dieterlen are reported to have met with Dogon elders right before their leaving. At this meeting it is claimed that the two were told of a small star (po tolo) that orbited a larger star (sigu tolo, also known as Sirius). It is also claimed that the elders knew that po tolo took around fifty years to orbit Sirius, and that it was extremely heavy. This is very close to the actual statistics of Sirius B. As it was reported that the Dogon mythology involved that star, and that this belief was thousands of years old, it was wondered how the Dogon knew of the star, since Sirius B is invisible to the naked eye. Additionally, it is claimed that the Dogon knew of Saturn's rings and Jupiter's moons.[1]

Frances Welsing claims that because of the Dogon's large amounts of melanin, they are able to pick up on vibrations from Sirius B. There is currently no proof that this is even remotely possible,[note 1] and also raises the question of why other African tribes (or Melanesians) wouldn't have similar legends, given that many of them also had copious amounts of melanin.

Even if the French anthropologists' account of the Dogon beliefs is accurate, this still doesn't mean that the source is extraordinary. While the Dogon could not have developed knowledge of Sirius B on their own, there is a much more likely external source — the technological civilization already populating the Earth. Sirius B had been discovered in the 19th century and its existence was widely known by the 1920s, so any explorer or trader passing through the region could have shared information about Sirius B.[note 2]

Of course, this speculation assumes that account of Griaule and Dieterlen is generally correct, but this may not be the case. Their source was a very limited circle of people, and when Walter van Beek studied the Dogon, he stated that:

Knowledge of the stars is not important either in daily life or in ritual [to the Dogon]. The position of the sun and the phases of the moon are more pertinent for Dogon reckoning. No Dogon outside of the circle of Griaule's informants had ever heard of sigu tolo or po tolo… Most important, no one, even within the circle of Griaule informants, had ever heard or understood that Sirius was a double star.[4]

If van Beek's statement is correct, then none of the above "explanations" really matter. Instead, Griaule and Dieterlen's results or at least their conclusions about Dogon knowledge of astronomy were simply wrong.

Other interesting facts about the Dogon[edit]

They live in an area of Mali called the "Dogon Cliffs", and dwell in houses that are literally built into the sides of cliffs. Dogon villages have an interesting and unique appearance, and one can waste quite a lot of time on Google Images looking at them. Here, waste some time. We're not kidding.

The Dogon actually speak several closely related languages. A few linguistics woo peddlers have attempted to find a link between the Dogon and Basque languages,[5] but this is completely foolish and has no support from the general linguistics community. In addition to the Dogon cluster (which belongs to the Niger-Congo group, the major language family of subsaharan Africa), a few villages speak the Bangi-me language, which is completely unrelated to any other language on the planet. Some suspect it may function as a sort of cant used by runaway slaves from other villages[6] — although it is profoundly different from all surrounding languages, as opposed to most cants which are based on vernacular used by the society in general.