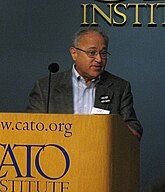 Friedman, verbalizing his fantasies at the Cato Institute, 2008-11-06.

David Director Friedman[note 1] (1945–) is an anarcho-capitalist writer, the author of a seminal book on the subject, The Machinery of Freedom, and a professor emeritus of law[1]. Friedman is the son of Milton Friedman of Chicago School economic fame.

Friedman is much more radical than many anarcho-capitalists, such as Murray Rothbard. Both he and the Rothbardians believe that all functions of government should be privatized and replaced by competing companies, such as private security firms, toll road operators, and arbitration courts.

However, while the Rothbardians believe that all the competing companies should enforce a single body of law that has been reached by consensus, somewhat like how things were done in the medieval Icelandic Commonwealth or in pre-Cromwellian Ireland, Friedman believes that the legislative process should also be privatized, and there would be no rules at all except cuius regio, eius religio, or its equivalent with secular law. How (or whether) democracy then sets in is another debate altogether.

Friedman also differs from Rothbardians and other natural-law anarchists and libertarians in advancing purely utilitarian arguments for the model he advocates, without reference to ethics except in the context of the operation of law.