From RationalWiki
(Redirected from Utilitarian)
Jump to navigation Jump to search

Utilitarianism grew out of the Enlightenment and nineteenth-century philosophy. Two of its chief proponents were John Stuart Mill and Jeremy Bentham.

Utilitarians typically do have one single moral absolute, usually pleasure or satisfaction of self-interest, which they consider intrinsically good and the basis for morality. Utilitarianism is a type of consequentialism, the philosophy which holds that actions should be judged by their effects; for utilitarianism, maximising some particular effect is the goal.

The trouble with utilitarianism is that it assumes humans have utility functions. It's a tempting idea because people and society actually use something like utilitarianism in the non-extreme ranges. But it's brittle in obvious ways, leading easily to absurd results.

The version of utilitarianism promoted by Mill and Bentham holds pleasure to be the only intrinsic good. Bentham summarized classical utilitarianism by stating that "nature has placed mankind under the governance of two sovereign masters, pain and pleasure." 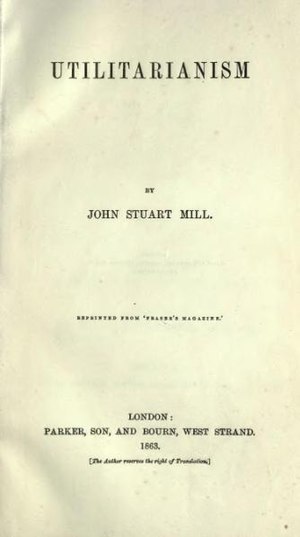 This is often criticized in modern times for four serious problems: there is no difference between "base" pleasure and more sophisticated or intellectual pleasure (except Stuart Mill differentiates between them in his book Utilitarianism ISBN 9783959401784); equality is not taken into account (if rich people get richer while the poor continue in misery, this doesn't increase the net pleasure of everyone on the planet. Studies show that there's a certain limit on income that prevents additional happiness. That amount is around 75,000 dollars annually. Annual earnings over 75,000 dollars stifles the accumulation of additional happiness.)[1]; pleasure is too abstract to be measured or quantified accurately (different people find different things pleasurable); and the concept of utilitarianism ignores recent research on the notion of the "hedonic treadmill" and the habituation of pleasurable experiences. (For example, listening to the same song doesn't maximize happiness any further. It may eventually drive the person crazy after a certain point).

Positive utilitarianism has criticisms too. It implies that overpopulation (of sentient beings) is mandatory, unless the suffering caused by this entirely "cancels it out" to the point that a low-population alternative would've had more net happiness anyway.

Average utilitarianism is an alternative that essentially states that population doesn't matter as much as "average" happiness or satisfaction per sentient being. A world with 4 sentient beings who are all 90% "happy" is better than a world with 8 sentient beings at 70% (this ratio is after taking loneliness into consideration). The 90% world is also better than a world with one person at 70%. The 90% world has neither the most net happiness nor the least net suffering (assuming the function used to compare is simple addition, and that each being's percentage scale is the same), but it is preferred under average utilitarianism.

Confusion is still caused when averaging lower sentient beings, such as rodents, with humans. Perhaps this can be solved by averaging the "goodness" of an individual's experience, and then multiplying that ratio with the individual's "amount of sentience," to determine the weighted average. Perhaps a scale can add weight to beings that suffer more, mathematically implying a prioritarian concept of equality.

Average utilitarianism kind of implies that the ideal world is a monoculture of the happiest (or least frustrated[note 1]) beings available (perhaps managed by non-feeling AI and accomplished through eugenics), though this is arguably better than nonexistence, or stuffing as many slightly-happy beings into the world as possible.

Act utilitarianism evaluates every individual act, declaring it "good" if it produces the most utility out of all possible acts in the circumstances. Critics charge, however, that we cannot go through life judging every single circumstance individually - we need easy to follow rules to guide our moral conduct. We often cannot predict the outcomes of our actions beforehand - so we need to follow uniform, easily-understandable rules. Thus, rule utilitarians take a different approach - they seek to establish moral rules, choosing moral rules based on which rules will produce the most utility out of all possible moral rules. However, having so chosen those rules, the rule utilitarian then judges individual acts, not by the amount of utility they produce individually, but on conformance to those rules.

Many criticisms are on the basis of absolute moral standards other than those proposed in utilitarian thought. These may be religious ones, or maybe secular ones based on human rights. Some forms of utilitarianism consider only the effects of actions and place no judgement on a person's motivations and whether they have "good intentions." However, nothing about utilitarianism requires that we ignore the role of "good intentions" when designing laws, punishments, or incentives.

Hypothetically, classical utilitarianism could be used to justify a scenario in which a small minority is enslaved in order to bring greater benefit or pleasure to the majority and hence a net gain in happiness. Of course, if people consider such a scenario undesirable, utilitarian calculations would have to take this into consideration. Good utilitarian reasoning would, in fact, prohibit any such scenario that does not, in practice, meet the net preferences of the people within it.

Ultimately, each objector to utilitarianism must argue for some objective moral criteria that utilitarianism would occasionally permit violating. Because every moral decision in a utilitarian framework requires a cost benefit analysis, no ethical "rules" are unbreakable. This is deeply upsetting to those who believe that their moral frameworks are objective. And yet, the clear absence of any way to establish such an objective framework dooms critics of utilitarianism to make unjustifiable assertions that their intuitive moral judgements are universalizable.

Some believe that utilitarianism proposes that pain and pleasure can be systematically quantized and measured. This reflects a misunderstanding,[citation needed] but is often of concern to critics of utilitarianism. They argue that, because there is no universally-agreed-upon standard unit of suffering or bliss, it can be difficult to compare harms and benefits in the form of pain or pleasure in some cases. For example, while it is clear that factory farming causes intense, prolonged suffering, it is not clear whether, all considered, every last factory should be closed; it is possible that retaining some factory farming could maximize the aggregate good. Likewise, critics argue, utilitarianism might permit maintaining a small underclass of slaves to achieve the best balance of pleasure over pain for society as a whole.

The utilitarian calculus can seem to demand knowledge we cannot properly claim to know. How are we to know what sonar feels like to a bat? How are we to know water feels like to a plant? How are we to know how these subjective experiences, many alien to our own, feel, let alone compare? Though we may apply general rules to guess the nature of these experiences, we are still at a loss as to what exactly they are and how they can be confidently calculated. This prevents a utilitarian from having a high degree of confidence about the moral value of some actions. Nevertheless, such precise calculations are not needed for many issues; the utility cost of torture, for example, is clear enough. Because moral value under utilitarianism is the product of values, and values are the subjective products of minds, we are essentially limited in the degree of confidence with which we can make firm moral judgements. Critics believe this is a weakness of utilitarianism. Proponents tout this flexibility and epistemic honesty as a strength.

The uncertainty about the feelings of other beings and entities has resulted in hilarious fringe initiatives like Brian Tomasik's essay Is there suffering in fundamental physics? and an organisation called People For The Ethical Treatment of Reinforcement Algorithms. Some might say that PETA itself is an older example.

Another possible criticism of utilitarianism is, in fact, a strength. Some have argued that, even if we strive to calculate utility costs using randomised controlled trials, as effective altruists often do, the problem is that human societies are very complex and constantly changing. Utilitarianism is essentially flexible. Indeed, it may be the only essentially flexible moral system, as all others require the establishment of an objective moral ruleset. As utilitarianism always requires a cost-benefit analysis, it requires that we constantly revise and update our moral judgements in changing conditions or with novel information. As example of the dangers of inflexible moral reasoning was perhaps demonstrated when Giving What We Can, a self-proclaimed effective altruist charity, responded to a 2015 Cochrane Collaboration casting doubt on certain types of deworming initiatives, and in passing quoted a criticism that "public health nutrition has changed, worm burden has declined and this probably accounts for the lack of effect on biomedical outcomes in contemporary studies".[6] Despite the initial evidence being flawed by programming errors, statistical errors[7] and it being of uncertain relevance to today's world in any case, Giving What We Can continues to recommend the same deworming initiatives anyway. Insofar as deworming is no longer an effective intervention, utilitarianism correspondingly cannot endorse it.

One other potential pitfall of utilitarianism (generally of the act-utilitarianism kind) is the open-ended question of what timeframe is to be considered in the utilitarian calculus, or at what point in the future the consequences of an action in the present can stop being evaluated. A utilitarian calculation of the best course of action could be vastly different depending on whether one is considering the next month, or year, or decade, or century.