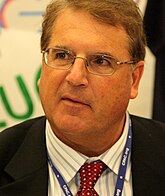 Thomas DiLorenzo (1954–) is an Austrian school economist and pseudohistorian who holds a post as a professor of economics at Loyola College, Maryland. DiLorenzo is a fellow at the Ludwig von Mises Institute and formerly worked for the neo-secessionist League of the South Institute. DiLorenzo's revisionist history has made him a popular "scholar" within libertarian circles and among some of the nuttier Teabaggers.

He is one of the foremost proponents of neo-Confederate thought. His body of work is something of a synthesis of the alternate universe histories put forth by neo-Confederates, laissez-faire fundamentalists, and libertarians, all in one package.

Despite his post as an economist, DiLorenzo is more known for his works of "history." The first thing to note about DiLorenzo's interpretation of history is that it reads much like Marxist histories, but replacing "class conflict" with "individual vs. state." Historical events revolve solely around this conflict and the characters who took part in these events can be shoehorned into either box, the evil "statists" or the virtuous "individualists."

For starters, DiLorenzo views the Constitution itself as a betrayal of the "small government" principles that the Founding Fathers laid out in the Articles of Confederation. Who perpetrated this dastardly scheme? None other than the statist Alexander Hamilton![1] DiLorenzo begins shoehorning early, where Hamilton represents the evils of the state (and "activist judges," of course) while Thomas Jefferson represents individual liberty. It's well-known that Hamilton, as a federalist, favored a larger role for the federal government while Jefferson favored a smaller role, but even Jefferson was not so strict as DiLorenzo presumes. For example, Jefferson was one of the earliest proponents of a system of public education and made the Louisiana Purchase, which was viewed as constitutionally-questionable at the time. Jefferson is also famous for having said:

Some men look at constitutions with sanctimonious reverence, and deem them like the ark of the covenant, too sacred to be touched. They ascribe to the men of the preceding age a wisdom more than human, and suppose what they did to be beyond amendment. [...] But I know also, that laws and institutions must go hand in hand with the progress of the human mind. As that becomes more developed, more enlightened, as new discoveries are made, new truths disclosed, and manners and opinions change with the change of circumstances, institutions must advance also, and keep pace with the times.[2]

Abraham Lincoln and the Civil War[edit]

DiLorenzo's two most notorious works are The Real Abraham Lincoln and Lincoln Unmasked, which mostly parrot and build upon the mythology of the Lost Cause of the South, especially the part about the Civil War "really" being about states' rights. DiLorenzo attempts to paint Lincoln as a virulent racist, careening along while selectively ignoring all of Lincoln's letters opposing slavery and his opposition to pro-slavery legislation. Lincoln was in favor of limited suffrage for slaves at best and saw his primary goal in the Civil War as keeping the Union together, but to characterize him as having no interest in abolition is ignorant at best and dishonest at worst. As Lincoln himself wrote in a letter to abolitionist Horace Greeley, "I intend no modification of my oft-expressed personal wish that all men every where could be free."[3] DiLorenzo further mischaracterizes the Lincoln-Douglas debates as being over the subject of economic policy of all things (they were focused on the issue of slavery, if you slept through history class like DiLorenzo) and Lincoln as trying to cow the South into submission in order to impose tariffs to benefit the North. DiLorenzo makes liberal use of quote mining in an attempt to "prove" this thesis, which at this point more resembles a conspiracy theory with Lincoln the racist using his abolitionist cred to get elected and enslave the South by ending the "inalienable right of secession."[note 1]

DiLorenzo makes legitimate criticisms when it comes to things like Lincoln's suspension of habeas corpus and intercepting telegraphs. However, using that to paint the South as the "good guys" is an exercise in willful ignorance, since Jefferson Davis was guilty of that and more.[4][5] Passion Plays, however, are DiLorenzo's stock-in-trade. In Lincoln Unmaksed, he repeats the claim that Lincoln issued an arrest warrant for Chief Justice of the Supreme Court Roger Taney, who had ruled that the president "did not have the authority to suspend habeas corpus".[6] To support this contention, DiLorenzo cites several accounts, but all of them were written years after the fact;[7] a transcript of a conversation in a memoir where Taney apparently reported his belief that he was about to be arrested does not constitute anything more than a rumour. No copy of this warrant has ever been found, and it was certainly never served. The main source for this claim was Ward Hill Lamon, Lincoln's friend and bodyguard, but his story "was never confirmed by Lincoln's principal biographers, and it stretches credulity to believe that Lincoln would approve such a grand provocation [...] In fact, Taney was never molested by any official of the federal government".[8]

The takeaway we are supposed to get from DiLorenzo's own morality tale is that Lincoln brought about the institution of the statist "Hamiltonian vision" of government by force and destroyed the "Jeffersonian vision" for good, making him the Great Satan of America's presidents until the even Greater Satan of Franklin Delano Roosevelt came along. Like any good crank, DiLorenzo has developed a massive persecution complex over his Lincoln histories, claiming anyone who calls him on his bullshit is part of the "Lincoln cult" and that mainstream historians have been trying to cover up Lincoln's "true" intentions.

DiLorenzo has long been an opponent of the Fourteenth Amendment to the U.S. Constitution with its pesky stuff about citizenship, due process and equal protection clauses.[9]

And, oh yeah, didja know that Hitler was inspired by Lincoln?[10] Huh...we thought it was Martin Luther. Well, at least he didn't blame evolution like so many others do...or atheism, like Pope Palpatine did.[11]

When it comes to the Great Depression, DiLorenzo gets even lazier and relies on points refuted a thousand times made by earlier writers.[12] He repeats the same talking points about Herbert Hoover being some kind of crypto-socialist and selectively ignores FDR's reversal of monetary and fiscal policy during the Roosevelt Recession and misrepresents the New Deal in general. File it alongside "histories" like that of Amity Shlaes. Both make nearly identical arguments and both are nearly as sophomoric. FDR is merely fodder for DiLorenzo's morality play in which Jeffersonian democracy has been stomped out and we've fallen off the track that the Founding Fathers™ clearly laid out for us.

As if to underscore what an expert for hire he is capable of being, in the mid-90s DiLorenzo worked at not one, but two "public policy think tanks" that churned out propaganda for the tobacco industry. The tobacco industry sought to get charities like the American Heart Association, the American Cancer Society and the American Lung Association out of public advocacy like, you know, saying cigarettes can kill you, and instead confine their expenditures to research. DiLorenzo, along with another hack, authored Cancerscam: The Diversion of Federal Cancer Funds to Politics. He also wrote another hit piece during that time titled Unhealthy Charities. [13]

A comprehensive chronicle of DiLorenzo's whoring for R.J. Reynolds, Philip Morris and the Tobacco Institute can be found at the University of California, San Francisco, Legacy of Tobacco Documents Library[14]; a general search function is available at the website (ya never know who could turn up, the money's that good!).

As a hard-line Austrian, DiLorenzo's economic work tends to be rehashings of older Austrian theory. The Federal Reserve creates business cycles, central banking is a "legalized counterfeiting operation," anything other than laissez-faire is fascism or socialism, etc. DiLorenzo has mostly built his name outside of Austrian circles on his "historical" work, but Ron Paul likes to use him as an "expert" in Congressional hearings and he has made appearances at CPAC (breaking irony meters everywhere, considering that the Republican Party is the party of Lincoln).[15]

So, as an economist, what is Mr. DiLorenzo's astute analysis of the current banking crisis? Why, ACORN and Jimmy Carter did it, of course![16]

The good professor has evinced a belief in the NAFTA Superhighway.[17]