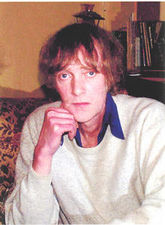 David Farrant was a British occultist and author best known for his connection to the nationally-publicized "Highgate Vampire sightings" in London, England during the 1970s. He served a prison sentence for desecrating Highgate cemetery and mailing voodoo effigies to the police.[1] 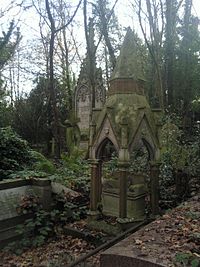 The cemetery in question

In the early 1970s reports of supposed supernatural activity at London's Highgate cemetery triggered a "media sensation". Farrant, along with self-proclaimed exorcist and vampire-hunter Sean Manchester appeared in the press and on television, each claiming the exclusive "discovery" of a vampire they said was lurking in the graveyard. After one ITV broadcast, a mob of thrill-seekers swarmed the cemetery and climbed over the gates despite police efforts to control them. The British tabloid press of the era featured regular coverage of Farrant's misadventures and clashes with authorities. Over the years, Manchester and Farrant have continued their rivalry. Both wrote separate books on the topic of the Highgate Vampire and sometimes publicly challenged each other to "magical duels".[2]

Highgate and the surrounding area, Hampstead, long known for its bohemian, arty population, were around 1970 at the centre of both the boom in occultism in London and the newly-legal gay scene (both the cemetery and nearby Hampstead Heath were popular gay cruising sites). So even without the supernatural, it's likely you could see some interesting things happening in the area. In addition, Highgate cemetery was in 1970 used for filming Andy Milligan's low-budget vampire movie The Body Beneath, shot a few months before the reports of the Highgate vampire emerged, and advertised as "Filmed in the graveyards of England".[3]

Although he cheerfully posed for newspaper and TV cameras in the early 1970s holding a cross and stake while affirming his intentions to hunt down and destroy the Highgate Vampire, Farrant appears to have tempered his views of the affair over the years. Today he claims not to believe in vampires, and says that a "dark figure" or some kind of "psychic entity" was to blame for the Highgate hysteria. He doesn't even like the word "ghosts," preferring instead to call them "images replayed from the past."[4][5] Despite not believing in vampires, he is the head of the "Highgate Vampire Society."[6] On at least one blog entry he refers to himself as a "witch" (albeit in quotation marks).[7] According to one UK tabloid, Farrant founded a number of occult or Satanic circles, putting in particular effort to recruit young women, saying, "They are all over 18 and we don't initiate them if we believe they are just coming along for the sex."[8]

When London police found Farrant naked beside a plate of glowing embers in an abandoned house in 1973, he told them he was conducting a Wiccan ceremony to rid the place of hauntings. Hauled before a judge and jury, he was exonerated and let go with a warning. Police detectives had roughly interrogated a friend of his, so he mailed them voodoo dolls with threatening messages attached. A few months later he was back in court, this time suspected of grave desecration after police discovered a headless corpse propped in the front seat of a local resident's car. Someone else came forward and admitted they'd put the body in the car as a joke, but thanks to some photos of vandalized graves found in his possession, Farrant was found guilty of damaging Highgate Cemetery and sending voodoo dolls to authorities. The judge sentenced him to more than four years in prison.[9] Farrant admitted to sending the voodoo dolls, but insisted the vandalism and desecration was caused by Satanists, not him.[10] 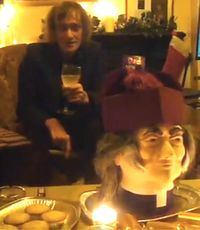 Farrant's rivalry with Manchester may stem from their history as competing "authorities" on the Highgate Vampire, or the latter's status as a "bishop," and Farrant's status as an "occultist." The pair has quarreled publicly over the years, taken part in mock "occult duels" and endless debates on Internet forums. Farrant distributes a series of satirical comic books called The Adventures of Bishop Bonkers which portray Manchester as a delusional paranoiac whose evil plans are humorously undone by Farrant's apparent charm and guile.[11] Farrant also expresses his intense dislike of Manchester with satirical YouTube videos. In one blog[12] Manchester complains that "a video made by and featuring David Farrant at Christmas 2011 culminates with the decapitation of my head in effigy. It can be viewed at this link."

Manchester has responded on various of his blogs by creating oil paintings that depict Farrant as a demon.[13] Manchester has also accused Farrant of having "narcissistic personality disorders", and alleges he is deliberately peddling a line of defamatory "anti-Bishop Manchester merchandise" such as T-shirts, drinking glasses, and mugs.[14] 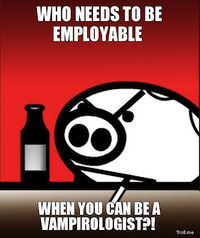 One of the "Cousin Hoggy" cartoons distributed by Farrant

An Australian vampire enthusiast[15] named Anthony Hogg[16] writes blogs critical of both Farrant and Manchester. He has accused Farrant of depicting him as a pig in The Adventures of Bishop Bonkers comics.[17] As evidence, Hogg cites a cartoon character named 'Cousin Hoggy' who is shown ascending to heaven after being butchered for a fictional Farrant-Manchester Christmas dinner.[18] Caricatures of Hogg also appear in Farrant's satirical YouTube videos. In one video, "Hoggy" travels from Australia to England to question Farrant, who promptly shoots him dead. In another, the deceased "Hoggy" is discovered haunting Farrant, who orders him captured in a 'ghost trap' and given to aliens for sexual experimentation.[19]

The unfortunately-named Hogg is also subjected to the online condemnation and weird photoshop stylings of bishop Sean Manchester who (typically speaking in the third person) complains that Hogg is "doing precisely what Mr Farrant wants, i.e. violating Bishop Manchester.".[20] Manchester or one of his Internet aliases also expresses his contempt for Hogg via a blog entitled "Hoggwatch".[21]

In 2013, Hogg demanded that Farrant contribute money to Highgate cemetery's upkeep and maintenance, saying that Farrant was responsible for the 1970s press hysteria that led to a wave of vandalism.[22]

Farrant had a habit of declaring "thaumaturgical war" on anyone who disagreed with him, including people he'd never met who wrote letters to pagan newsletters disagreeing with him.[23] These declarations were greeted with hilarity by pretty much all recipients.

In 2012, Farrant sought to turn a private estate in Yorkshire reputed to be the site of Robin Hood's grave (where he claims to have exorcised evil spirits years earlier) into a "paranormal tourist attraction." Sketches posted to his blog reveal plans to move the grave (guaranteed to stir up those restless spirits again) to make way for an IMAX theater, a restaurant, and a golf course on the property.[24][25]