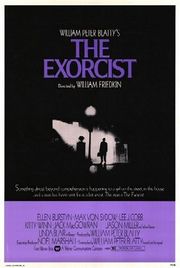 The Exorcist, a movie that gives people nightmares.

Exorcism is the practice of purging demons, ghosts, dark influences, malevolent spirits, lost souls, and/or Satan out of a possessed person's body and/or soul, a haunted house, a cursed object, etc.

Exorcism usually involves invoking God, Jesus, angels, saints, doing funny dances, pouring holy water or dangerous substances on the victim patient subject, praying, sacrifices, amulets, and fasting either by the clergy or by the subject, among other things. It is generally performed by a member of the clergy or other holy dudes, or just ambitious religious extremists. It may include enhanced interrogation; see examples of deaths below.

The idea of demonic possession and exorcisms is present in many religions including Islam and Hinduism and Christianity. It is officially recognized by the Catholic Church,[2] in which the practice is increasing in popularity.[3] The Jewish dybbuk is very similar but is usually perpetrated by a malicious dead person.

Notwithstanding the beliefs of the Catholic and Protestant churches there is no reliable and testable evidence of demonic possession occurring or even, for that matter, of demons existing.

In 2008 the Texas supreme court ruled that a 17-year old girl who was imprisoned and abused while hallucinating could not sue the church over damages done during the exorcism.[4] In 2017, charges were brought against church members in the case of a North Carolina gay man who was beaten and choked for 2 hours in an exorcism attempt.[5]

A 2018 article reports that in the UK suspicion of witchcraft and demonic activity has resulted in nearly 1,500 child abuse cases.[6]

According to the New Testament, Jesus cast out demons (Matthew 8:16), an act which became the foundation for Christian exorcism and it appears Christian theology as early as in the writings of Origen in the 3rd century CE.[7] Those few Christians who do believe in spiritual possession feel that they are empowered to perform exorcisms in the name of Jesus.

Demonic or other possession was at one time used to explain everything from basic illness to odd behavior of an individual, loss of memory (for example, after an accident), social problems like alcoholism and drug abuse, prostitution, and generally any opinion which was an embarrassment to an individual, his family, or the Church. As science began to provide explanations for illness, and as society became more accepting of different points of view, "possession" became more infrequent.

Small numbers of Christians accept exorcism in the 21st century. People being exorcised appear seriously distressed; believers say the demons rather than people exorcised are distressed.[8] Of course, they said the same thing when "witches" were being tortured to extract confessions.

Michael Cuneo, a sociologist at Fordham University, says that there are 10 official Catholic exorcists in the United States, and he estimates that there are 500-600 evangelical exorcism ministries.[9][10] 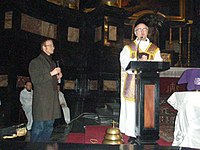 The Vatican website has this to say on Exorcism:[11]

Pope Francis was filmed carrying out a possible exorcism in St Peter's Square. Francis has previously carried out exorcisms as did John Paul II.[12][13]

The Roman Catholic Church has a body of exorcists that follow tightly regulated rules, most of which are kept secret from all but a very few church members.[14] At least one official exorcist, José Antonio Fortea, was happy to blab at least some of the rules.[15]

The Roman Catholic hierarchy is reviving interest in exorcism in hopes of reminding people that secular institutions are incapable of dealing with demons while the church, of course, can.[16] They will probably not be trying to revive interest in the 1976 killing of Anneliese Michel by two priests (Ernst Alt and Arnold Renz) via exorcism in Germany.[17]

One famous case was "Roland Doe", a fourteen year old boy in St Louis, USA, who was exorcised several times by multiple priests in the late 1940s. The boy, who was also known as Robbie Manheim, was reportedly brought to St. Louis, Missouri from Maryland for treatment. One of the priests, Raymond J. Bishop (not a bishop) wrote a book, The Exorcist Diaries about the case. It also inspired William Peter Blatty's 1971 novel The Exorcist, which in turn inspired William Friedkin's film of the same name. The exact circumstances have been debated, with various journalists and writers (including Mark Opsasnick and Thomas B. Allen) claiming to unravel the hidden truth: most people believe the teenage boy Doe had emotional problems or a psychiatric condition rather than a demon. It is not clear exactly how many exorcisms were performed, or what their nature was, or even if they took place at all, but it appears likely that Bishop and William S. Bowdern, both priests who also taught at the Catholic St. Louis University, performed some kind of ritual. And the boy seemed to survive OK, with Opsasnick claiming to have contacted him in 2013.[19]

The Eastern Orthodox Church also believes in Satan as a created being and a fallen angel with free will who always chooses to do evil.[note 1] The Devil can possess people and objects. As with Roman Catholics, priests do exorcisms and renunciation of the Devil is part of baptism. Lay Orthodox believers are also encouraged to "pray and exorcise evil". There are specific prayers for exorcism.[20] Orthodox exorcism can involve physical restraints on the victim patient subject.[21]

Many Protestant fundamentalist churches are less regulated in their use of exorcism, leading to violent and occasionally deadly attempts to exorcise unwilling and/or uncomprehending victims.[22][23][24] In Texas forcible exorcism is legal or was legal in 2008.[25]

Exorcisms are needed because society is often skeptical about the teachings of the more hard-line Christian groups has lost its moral compass. According to J. F. Cogan, demonic possession is behind a wide range of happenings including gay ordination, women's ordination, and even spontaneous human combustion.[26] People can get themselves possessed by a range of activities that Christian fundamentalists dislike, such as viewing porn, illicit sex, homosexuality, drug abuse, and even rock music. Astrologers and other psychics are vulnerable to demonic possession as are those who do Hindu or Buddhist meditation. Demons may time share; they torment one person then rush off at a speed slightly below the speed of light to torment someone else. Therefore possessed people may be worked up one moment and calm the next when the demon has gone off to a fresh victim.[27]

In evangelical Protestantism, exorcism is often practiced as part of a broader spiritual warfare agenda. In an even more ludicrous variety, exorcisms are performed at long distance over the telephone by Bob Larson or over the television by name it and claim it preachers ("laaay your hands on the television set").

In the UK exorcisms are increasing; they happen mainly in charismatic and Pentecostal churches, also among communities of West African origin. Frequently, the people exorcised are psychiatrically disturbed. Psychiatrically ill people are sometimes told to stop their medication as the church believes prayer and/or exorcism is sufficient. If psychiatric patients do not get better after exorcism they may believe they have failed to overcome the demon and get worse.[29]

Some form of exorcism prior to baptism is common to many forms of Christianity going back to the 4th century: typically with some evil spirit being banished from the baby to let god in.[30] Baptism includes aspects of exorcism to address the horror of the infant coming into contact with its mother's icky sexual vagina: traditional misogynistic belief held that such contact caused (or allowed) an evil spirit to enter the child.[31]

Martin Luther revised the baptismal rite to include the hocus-pocus: "I adjure thee, thou unclean spirit, by the name of the Father and of the Son and of the Holy Ghost that thou come out of and depart from this servant of Jesus Christ". However some Protestants, including Huldrych Zwingli and John Calvin, rejected this as papal nonsense, and it was dropped from much of Lutheranism in the 18th and 19th century.[30] Many varieties of Christianity have chosen to welcome young children in a more friendly way; the Catholic rite of baptism still includes a "prayer of exorcism", but it no longer invokes horror movie imagery.[32]

A Sinhalese mask used in exorcism, from Sri Lanka

Exorcism is also practiced in other religions. In 2013, three family members in Malaysia were jailed for crushing to death a girl in an attempted Buddhist exorcism.[33] In 2014 a Belgian court charged 6 people with the death by torture of a woman in an Islamic exorcism that lasted one month.[34]

Exorcism is also found in Voodoo[35] and other folk and syncretic religions.[note 2]

reported witnessing an exorcism,[36] though being a decentralized religion that has changed much in the intervening millennia. Exorcism has been described throughout Jewish history[37] In contemporary Judaism, spirit possession and exorcism appears to be restricted to non-Western (particularly non-Ashkenazi) Jews.[38]

Medicine and psychology do not identify any such thing as "possession"; but rather regard the apparent symptoms as misdiagnosis of different psychological conditions or social conditioning. In at least one exorcism that mentalist Jan Hellesøe witnessed Bob Larson perform, the subject had previously been diagnosed with a personality disorder, and the results of the exorcism were later replicable purely with hypnosis on someone else with no diagnosed psychiatric disorder.[39]

Although validity of exorcism would be a tough argument for theism, it surprisingly isn't brought up in debates very much. It could be that even the theists realize that exorcism is bollocks, or it's a taboo theme among them. Or perhaps it's one of the few areas where they understand that what seems obvious to them isn't obvious to other people. Given that they often do appear to elicit some sort of response from the person undergoing the exorcism, and given that not everyone undergoing an exorcism wants to be undergoing an exorcism (such as those who are homosexual) one theoretical argument from a scientific perspective could be that the effect of people yelling and screaming at you is enough to elicit an emotional response.

The job of exorcist would seem to be perfect for a psychopathic sadist. They are usually able to get away with anything short of murder: kidnapping, torture and general mayhem. Here are some cases where the psychopaths were caught: