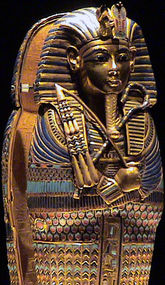 Tutankhamun's curse is the belief that those associated with the opening of the Pharaoh's tomb were somehow "cursed" and died in mysterious ways. Despite popular misconceptions, no curse was actually found inscribed in the Pharaoh's tomb, rendering the whole notion into pseudohistory.[1]

Tutankhamun faded from public consciousness in ancient Egypt within a short time of his death, and remained virtually unknown until the early 20th century. The location of the tomb was lost, because it had come to be buried by stone chips from subsequent tombs, either dumped there or washed there by floods. In the years that followed, some workers' huts were built over the tomb entrance, clearly not knowing what lay beneath. When at the end of the 20th dynasty the Valley of the Kings burials were systematically dismantled, the burial of Tutankhamun was overlooked, presumably because it had been lost and even his name may have been forgotten.

In 1907, just before his discovery of the tomb of Horemheb, Theodore M. Davis's team uncovered a small site containing funerary artifacts with Tutankhamun's name. Assuming that the site was Tutankhamun's complete tomb, Davis concluded the dig. The details of both findings are documented in Davis's 1912 publication, The Tombs of Harmhabi and Touatânkhamanou; the book closes with the comment, "I fear that the Valley of Kings is now exhausted." But Davis was to be proven spectacularly wrong.

The British Egyptologist Howard Carter (employed by George Herbert, 5th Earl of Carnarvon) discovered Tutankhamun's tomb (since designated KV62) in The Valley of The Kings on November 4, 1922 near the entrance to the tomb of Ramses VI, thereby setting off a renewed interest in all things Egyptian in the modern world. Carter contacted his patron, and on November 26 of that year both men became the first people to enter Tutankhamun's tomb in over 3000 years. After many weeks of careful excavation, on February 16, 1923 Carter opened the inner chamber and first saw the sarcophagus of Tutankhamun.

For many years, rumors of a "Curse of the Pharaohs" (probably fueled by newspapers at the time of the discovery) persisted, emphasizing the early death of some of those who had first entered the tomb. The most notable was Lord Carnarvon himself who died of blood poisoning after cutting himself while shaving. However, a recent study of journals and death records indicates no statistical difference between the age of death of those who entered the tomb and those on the expedition who did not. Indeed, Howard Carter himself died in 1939 at age 64, and most other members lived past 70.

This pseudohistory-related article is a stub.
You can help RationalWiki by expanding it.
Retrieved from "https://rationalwiki.org/w/index.php?title=Tutankhamun%27s_curse&oldid=2431612"
Categories:
Hidden categories: