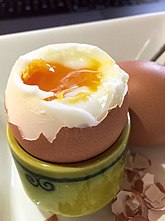 Yummy
Not to be confused with cholesterol denialism

Vegans and opponents of the egg industry continue to promote the view that dietary cholesterol causes a significant increase in LDL cholesterol, thus increasing cardiovascular disease (CVD) risk and all cause mortality. However, high quality research on egg consumption analysed in recent systematic and umbrella reviews does not support this view.[5][6][7][8]

The idea that dietary cholesterol significantly increases the total blood cholesterol level was first promoted by American health authorities in the 1960s and was debated for many years.[9][10] The American Heart Association removed dietary restriction of cholesterol in 2013 and the Dietary Guidelines Advisory Committee removed the restriction in 2015.[9]

The mainstream medical consensus is that cholesterol in food only has a small effect on the bad (LDL) cholesterol in your blood.[12][13][14][15][16][17] Saturated and trans fats in food cause a much greater increase in LDL cholesterol and is a risk factor for heart disease.[13][18]

The United States Department of Agriculture, Dietary Guidelines For Americans 2015-2020, recommends limiting the intake of saturated fats to less than 10 percent of calories per day but does not set a specific limit for consumption of dietary cholesterol.[19] They note that the removal of the specific limit "does not suggest that dietary cholesterol is no longer important to consider when building healthy eating patterns. As recommended by the IOM, individuals should eat as little dietary cholesterol as possible while consuming a healthy eating pattern".[20] Some foods that are rich in cholesterol are also high in saturated fat, so this may confuse people. The British Dietetic Association note that:

Although some foods contain cholesterol – such as shellfish, eggs and offal – this has much less effect on our blood cholesterol than the cholesterol we make in our body ourselves in response to a high saturated fat diet. Many cholesterol containing foods are relatively low in saturated fat and contain other useful vitamins and minerals. Only cut down on these foods if you have been advised to by your doctor or a dietitian. Cutting down on saturated fat in the diet is much more helpful than reducing dietary cholesterol.[21]

Many medical studies agree that eggs do not increase CVD risk in the general population. The American College of Cardiology

have noted that observational studies from 1980-2012 (involving more than 250,000 subjects) have not supported an association between dietary cholesterol and CVD risk.[3]

A 2016 study found that eating one egg every day is not associated with an elevated risk of coronary artery disease. The study concluded that "egg or cholesterol intakes were not associated with increased CAD risk, even in ApoE4 carriers (i.e., in highly susceptible individuals)."[24][25]

Current studies have tended to show that the consumption of eggs is not a risk factor of CVD in healthy people. However, people who are at high risk of CVD such as those with diabetes or hypertension need to have caution with dietary cholesterol intake, especially egg intake. Also, some people seem to be more sensitive to dietary cholesterol whose blood cholesterol level is highly correlated to dietary intake. Therefore, even though the recommendation of restricting cholesterol and egg consumption in AHA and DGAC has been eliminated, we still need to have caution with them based on the physiological status of people.[9]

Two umbrella reviews published in 2020 have concluded that there is no association between increased egg consumption and CVD risk in the general population.[5][6]

Eggs are also a rich source of dietary lutein and zeaxanthin which are good for eye health and can reduce incidence of age-related macular degeneration.[26][27][28]

In 2022 the first review looking at data from clinical trials and epidemiology on dietary cholesterol was published:

Vegans are the main opponents of dietary cholesterol. For example, Michael Greger