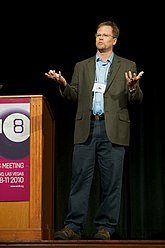 Kevin M. Folta is a well-respected professor, researcher in plant genomics, science communicator and the director of the Horticultural Sciences Department of the University of Florida.

Folta has formal training in communication and has been recognized for his skill by scholarly institutions.[1] He is a firm proponent in public outreach efforts to spread the knowledge of science.

Folta operates the Talking Biotech podcast which is billed as "a podcast dedicated to content on genetic improvement of plants, animals, and microbes."[2]

Folta is one of the many scientific experts who answers series of submitted questions on the website "GMO Answers."[3]

Accusations of conflict of interest[edit]

U.S. Right to Know, a non-profit anti-GMO group that seeks mandatory labeling of all GM foods, targeted 40 U.S. researchers with the Freedom of Information Act (FOIA), demanding access to their emails in the attempts to expose corporate bribery and conflict of interests. Among those targeted were Kevin Folta, Bruce Chassy, Richard Goodman, Michelle McGuire, and Jon Entine. Mainstream scientists claim these acts by U.S. Right to Know are nothing more than an attempt to harass and intimidate scientists.[4]

In early February 2014, U.S. Right to Know targeted Folta with an FOIA. They released roughly 4,600 pages of emails that stretched over 13 years, in an attempt to show a close relationship between Folta and the biotech industry (Monsanto). When the emails failed to reveal anything, the anti-GMO group started to smear Folta for providing content for an industry website, "GMO Answers", and accepting a $25,000 grant from Monsanto for a biotech communications fund intended to pay for his expenses; money which was ultimately never used.[5]

Folta said being compensated for travel and setting up a fund to help finance Talking Biotech hasn’t changed his position on the science. "If you compare how I answered questions before and after that funding, it’s identical," he said. "The facts didn’t change and my desire to communicate facts didn’t change." Bottom line, Folta said, is nobody has refuted his answers or his presentations. "Nobody has questioned anything I’ve ever said," Folta said. "Nobody has questioned my research. What they’ve done is gone after me because I do it."[6]

In response to the controversy of the $25,000 grant from Monsanto and personal threats against Folta, the University offered to return the donation, which Monsanto refused, so funds were redirected to a university food pantry. In October 2015, Nature Biotechnology wrote that scientists like Folta have been "targeted because they speak inconvenient truths about GM technology" and stated that the funds "were tied neither to [Folta] directly nor to his research. His conflict of interest disclosures were wholly compliant with his university's rules. He never used industry funds for personal gain."[7] The three past presidents of the American Association for the Advancement of Science and Gretchen Goldman writing for the Union of Concerned Scientists (UCS) have all criticized the FOIA attacks by U.S. Right to Know, referring to their tactics as similar to Climategate.[8][9]

Like antivaccinationists, quacks, anthropogenic global climate change denialists, and creationists, when anti-GMO activists can’t win on the science because science doesn’t support them, they resort to attacking the scientists. Despite the emails revealing nothing, and the Monsanto grant not affecting Folta's research and views in any way, the death threats and threats of violence kept pouring toward Folta.

On November 4, 2015, Folta decided to take an opportunity to briefly leave Facebook due to the relentless attacks.[10] The next day, the University of Florida ordered Kevin Folta to suspend Talking Biotech podcasts.