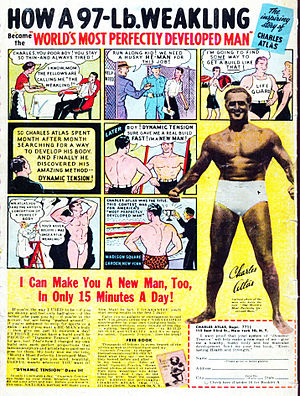 Men: are you skinny? Do you get sand kicked in your face- hang on, where's the last page?

Broscience (or less commonly bromeopathy[2][note 1]) is a derogatory term for misconceptions and ideas of questionable scientific credibility, passed around among laymen by word-of-mouth as if factually true.

Most examples of broscience pertain to biology, fitness and sports, and it most often circulates in fitness, athletic and bodybuilding circles, where many people want to know how to most effectively work out but are either ignorant of or do not fully understand the actual science. In general, such beliefs rely on anecdotal evidence and gain their popularity more from if the speaker even lifts than from proof or references.

Bodybuilders know all about hard work and effort being necessary to get the reward. But if you don't have a proper understanding of how to apply your hard work and effort, then it will amount to little more than repeatedly banging your head against a wall.

The word broscience is a compound of the word science with the word bro, a truncation of "brother" often used among friends in the social groups where such ideas circulate. It is (probably) a coincidence that broscience abbreviates to BS. One populariser of the term says:

As the name implies, the term "broscience" is usually applied to such notions passed around among men. Among women, a better term might be "support group science" or, historically, "wives' tales."

According to Stephen Barrett, the thing we now call "broscience" is largely due to one Bob Hoffman,

a bodybuilding promoter, Olympic coach, and founding member of the President's Council on Physical Fitness and Sports. He was also involved in the National Health Federation and had a supplement business on the side, which got in trouble with the FDA many times.[note 2]

Exploring the limits of logical fallacies[edit]

See the main article on this topic: Logical fallacy

In 2022, as part of a show called "The End of Men" that alleges that somehow men are less masculine than the used to be, Tucker Carlson had a bro named Andrew McGovern who advocated testicle tanning[note 3] using infrared light for its alleged ability to increase testosterone. As it is normally understood using infrared light is not tanning since tanning is caused by exposure to ultraviolet light. Carlson responded to his guest's claims by saying:[6]

It's a crazy argument, right? Maybe we should take it seriously. Well, Carlson did by repeating the argument to justify taking seriously his show that explored the claim that extraterrestrials cause cattle mutilation.[6] The argument consists of several fallacies: four-term fallacy, enthymeme fallacy, overgeneralization, false equivalence and probably others.