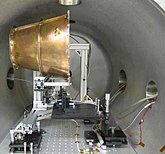 The EmDrive is a reactionless spacecraft drive proposed by Roger Shawyer in 1999. The key thing about it is that if it works, several extremely well-understood and tested principles of physics go completely out the window.

Although the magnitude of the effect is one that should be easily measurable, being far larger than the gravitational forces measured in the Cavendish experiment

over 200 years ago, the various experiments performed to date have suffered from major problems with their experimental design and measurement techniques. So far, none have even tested a device as a closed system, despite that being well within reach at the power levels used in some of the experiments. Additionally, the measurements published suffer from severe drift and other issues that indicate problems with the apparatus, and measurements at different orientations and power levels produce inconsistent results.

The concept gained considerable press attention in 2015, after someone at NASA lab Eagleworks, which specialises in investigating almost-certainly-wrong Hail-Mary ideas on a "what if" basis, tried out the idea and the press went nuts with the notion that this constituted NASA endorsing it.[2]

A history of ever-shrinking effects[edit]

The inventor claims that the device (engine) works by saturating a resonant cavity with microwave radiation; the radiation exerts pressure on the walls of the cavity. This is closely analogous to making a car move forward by sitting inside it and pushing the steering wheel, or using a fan to blow a sail;[3] momentum just doesn't work like that. However, if you don't really understand physics, this is potentially hugely exciting!

Shawyer claims that due to "relativistic effects," the cavity (shaped like a truncated cone) will experience a larger force against the large end than the small end, due to the group velocity of the waves changing as the local diameter of the cavity varies.[4] That is: thanks to special relativity, classical electromagnetism can violate conservation of momentum. This is complete rubbish, but you need to know physics to understand that.

In 2001, Shawyer got a £45,000 grant from the British government to study the idea. He claimed that with 850 watts of power, he got a force of 0.016 newtons. (About the gravitational force of a penny. This was within the bounds of an experimental error.)

New Scientist wrote a rather favourable article on it in 2006, although after complaints they later made a note on the New Scientist blog that they should have more thoroughly covered the criticism of the drive.[5]

Chinese researchers from the Northwestern Polytechnical University led by Yang Juan claimed to have verified the theory behind EmDrive independently in 2008[6] and constructed a kilowatt-capable device in 2010[7] that produced 750 mN of measured thrust given 2500 W of input power.

A couple of NASA researchers started studying the idea in 2014.[8] They achieved 1/1000 of the force Shawyer claimed to see in his experiments—an average output of 91.2 µN at 17 W of input power over five runs, with a net peak thrust of 116 µN. These measurements were well outside the error range of the torsion pendulum used to detect the thrust, and are thus at least possibly significant, although there are many other forces that could have potentially caused the effect.[9]

The unfortunate effect of anyone from NASA looking at it at all was that the press and the hard-of-thinking took this as a NASA endorsement. This was not helped by the completely unofficial news site "NASA Spaceflight" putting the story forward,[10] noting that "A community of enthusiasts, engineers, and scientists on several continents joined forces on the NASASpaceflight.com EM Drive forum to thoroughly examine the experiments and discuss theories of operation of the EM Drive" without noting that they had barred all skeptical discussion from said forum in case it scared away the experimenters or Shawyer (neither of whom were present in the first place).[11]

In November 2016, the Eagleworks team concluded a test series and wrote a paper that was accepted for publication in the peer-reviewed Journal of Propulsion and Power.[12] The bottom line was reported as:

How it's supposed to work[edit]

The EmDrive has become one of a small family of supposed reactionless drives, and each researcher seems to have their own pet theory. Shawyer's "theory" is based on special relativity, at least as Shawyer understands it: he claims that the radiation inside the cavity has less momentum at the narrow end of the cavity due to a reduction in group velocity, and that the resulting force against the large end is higher.[13] Forces exerted on the sloped sides of the resonant cavity are dismissed as "negligible", when a simple application of conservation laws would have them exactly equal any change in momentum of the electromagnetic wave traveling along the cavity due to the geometry of those surfaces. Shawyer's theory is muddled and inconsistent, with misunderstandings of the equivalence principle and an apparent assumption of an absolute universal rest frame (he and Dr. Harold White claim the device loses efficiency as it accelerates[14][15], and Shawyer claims that the drive is best used to hover instead of accelerate[16], despite there being no difference between hovering and accelerating at 9.8 m/s2[17]), and many other problems. Amusingly, he not only seems to believe there is an absolute rest frame, he apparently believes that Earth's surface is at rest with respect to it.

The Chinese researchers suggest it's somehow based on electromagnetism and Maxwell's Law, and Dr. White's group believes the microwaves push against "quantum vacuum virtual particles" in the resonant cavity. Dr. Fernando Minotti, a researcher at CONICET, in a 2013 paper titled "Scalar-tensor theories and asymmetric resonant cavities" noted that the alleged thrust produced by the Emdrive may be explained by certain scalar tensor theories of gravity. Also, Dr. Michael McCulloch in a paper titled "Can the Emdrive Be Explained by Quantised Inertia?"[18] noted that the thrust produced by the EmDrive may be explained by Unruh radiation which causes the photons in the wide end of the cavity to have greater inertial mass than the photons in the narrow end, causing the cavity to exhibit thrust towards the narrow end.

Several prominent physicists have said that the concept is impossible.[19] A Ph.D. physicist, John Costella, in his related paper explained why.

Shawyer claims that the EmDrive is not reactionless and does not violate any laws of physics. Unfortunately, this contradicts his other claims that it produces thrust as a closed system.

"Reaction drives" such as rockets rely on conservation of momentum: some form of propellant is expelled in one direction, and the craft gains an equal amount of momentum in the opposing direction. The propellant expelled by a reaction drive need not be a material substance: photons carry momentum proportional to their energy, and so a drive that simply directionally emits photons will produce thrust (albeit very small amounts of thrust for a given power input). These are not closed systems, reaction drives all rely on something leaving the system to carry momentum away.

The EmDrive, on the other hand, is claimed to produce far greater amounts of thrust than a photon thruster of the same power would, and to do so as a closed system with no emitted radiation. It does not expel any propellant, and so has no way of balancing the momentum it gains, making it a "reactionless" drive. If it followed conservation of momentum, it would not accelerate.

Conservation of energy fares little better. The EmDrive is specifically stated to be a reversible electrical machine: power input causes acceleration in one direction, acceleration in the other causes it to output power.[20] Every object resting on Earth's surface is experiencing 9.8 m/s2 of acceleration with no energy cost, so Shawyer's claims lead to the conclusion that an EmDrive just sitting on the ground is a free energy device, producing endless power output from gravitational acceleration.

Additionally, direct conversion of energy to thrust will necessarily violate conservation of energy unless the energy-to-thrust ratio is no better than that of a photon rocket (and photon rockets have horrendously terrible efficiencies, by the way).

Suppose a spaceship powered by the EmDrive is launched, which maintains an acceleration of 9.8 m/s2, or 1 G. It has a mass of one million kilograms, which is about half of the launch mass of the space shuttle before it was retired. The thrust measured by NASA’s experiment was no greater than 116 µN with a power input of 17 W, giving it a power consumption of 0.147 W/µN. The ship will require 9.8 meganewtons to accelerate at 9.8 m/s2, which will require a whopping 1.4 trillion watts, which is more than half of the entire Earth’s power consumption. To remain consistent with special relativity, the ship’s velocity is always measured relative to Earth.

EmDrive proponents have suggested that the efficiency of the EmDrive reduces with velocity.[15] That raises even bigger problems, such as how the acceleration of the ship would vary depending on an observer's velocity relative to the ship. If the ship traveled close to the Earth at 200 km/s, observers on Earth would need to observe the ship accelerating by at ~7 m/s2 for conservation of energy to not be violated, but passengers on the ship would insist that it was accelerating by at 9.8 m/s2; because no significant time dilation occurs at less than 10% of the speed of light, it can be ruled out as a solution to the discrepancy. Suggesting that any universal frame of reference exists is to suggest that special relativity should be thrown out the window. Considering that there is far more evidence that special relativity is true than there is evidence that the EmDrive works, it should be obvious why the EmDrive is still largely ignored by the scientific community.

The Eagleworks team at NASA investigated a similar device called the w, which was also shown to produce thrust—again, its principle of operation is similar to EmDrive, but somewhat less efficient according to Shawyer. The inventor of the Cannae Drive, Guido G. Fetta, postulated that the drive produced thrust partly via radial slots engraved along the bottom rim of the resonant cavity interior. However, the NASA team proved this idea false by testing a "null" drive that had no slots along the bottom. Both drives produced about the same amount of thrust indicating that slotting did not affect the thrust. A third control device was also tested with an RF load but without using a resonant cavity, which resulted in no thrust as expected.

NASA plans to upgrade their equipment to higher power levels, use vacuum-capable RF amplifiers with power ranges of up to 125 W, and design a new tapered cavity analytically expected to produce thrust in the 0.1 N/kW range. Then, the test article will be shipped to other laboratories for independent verification and continued evaluations of the technology, at Glenn Research Center, the Jet Propulsion Laboratory and the Johns Hopkins University Applied Physics Laboratory.

Finally researchers tested for magnetic interactions, and found the underlying systemic error leading to the perceived thrust. When the cable loops were shielded properly the effect vanished, showing that this drive is truly impossible.[22]