From RationalWiki
(Redirected from Car)
Jump to navigation Jump to search

This Mercedes likely won't help you get a date. Unless they're 127 years old or a goth.

Automobiles are a common form of transport in much of the developed world. Also known as cars, they are generally large, multi-ton wheeled carriages powered by combustion engines. These vehicles are capable of travelling long distances at a respectable speed. Unfortunately, most automobiles burn fossil fuels, a non-renewable resource that pollutes the atmosphere. The carbon dioxide emissions from these fuels also contribute to global warming.

Carpooling is a great way to maximize fuel economy, reduce emissions, and save America!

However, on some roads where the speed limit is "how fast you can go", wings can go a long way toward improving stability at speeds in excess of 160 km/h. An example is the original Audi TT sports car that was recalled and forced to add a rather unsightly spoiler on the back due to lack of grip at high speeds.

In the wake of widespread concern over climate change and rising gasoline prices, many American automobile-drivers have been switching over to hybrid cars and to smaller, more fuel-efficient vehicles. However, some drivers continue to buy and use highly inefficient SUVs, such as the iconic (and discontinued) Hummer, despite the economic and environmental problems that these vehicles pose.[8]

In addition to the environmental impact of automobiles, their use also claims many lives each year, with approximately 3,000 deaths caused by automobile use in the UK each year.[9] The manufacturers and motorist lobbies have managed to successfully shift at least some of the blame for these incidents onto the victims. This has been done by the setting up of motorist-lobby funded "safety charities", such as the Road Safety Foundation in the UK, which promotes cyclists and pedestrians dressing in high-visibility clothing, in addition to helmets for cyclists. Much of this promotion is addressed directly to young children, in schools.[10]

The good news is, modern automobiles are considerably safer than they were half a century ago. Seat belts weren't even required on cars in the U.S. until 1968, let alone safety features like crumple zones, air bags, and antilock brakes. Ralph Nader's 1965 book Unsafe at any Speed was influential in getting Congress to unanimously pass the National Traffic and Motor Vehicle Safety Act in 1966.[11] U.S. traffic fatalities were 10.4 per 100,000 persons in 2011, as compared with the all-time high of 26.4 per 100,000 persons in 1969.[12]

Historically, almost all cities were compact and had as many people on as little room as possible (that's the point of a city after all); the car enabled the phenomenon of "suburban sprawl", with more and more suburbs upon suburbs (often voting conservative, to nobody's surprise) along tax-supported interstate highways. Interestingly, several entire countries have largely embraced alternatives to cars -like the Netherlands (bikes and mass transit) or Denmark (bikes).

In many countries, especially in the developed world, World War II resulted in cities that were more or less tabula rasa, so city planners could (re-)build "modern" automotive-centric cities. However, even the US — a country that was not bombed to any significant extent after 1865 — tore down many historic buildings to build freeways right through downtowns. The urban-planning community now almost unanimously views the effects of this negatively - and as a matter of fact several cities have torn down urban highways, including San Francisco, Seoul, Portland (Oregon), and Madrid.[14] In all these cases the cities that tore out urban freeways never looked back.

For some reason (which may have to do with marketing) manufacturers design and construct the average car to operate on speed-unlimited German autobahns. This means that vehicles which operate within or even between urban areas in most parts of the world end up grossly over-specced for their alleged purposes of ferrying people around other places under local conditions. The higher the design speed, the more safety measures required, and the higher the cost of each individual vehicle. Go figure.

The car-free movement is a bunch of hippies an environmentalist socio-political movement that aims to creatusher in a car-free world. The rationale behind the movement is that cars are responsible for the destruction of street life, damage to the social fabric of communities, isolation of people, suburban sprawl, inconvenience to other street-users, noise pollution, air pollution, global warming, a decent proportion of crime, and waste of energy and natural resources.[15] Automobiles should therefore be abolished. The car-free idea is also sometimes used as a strawman position whenever someone argues that people should drive less often, or that governments should invest in infrastructure for modes of transport other than private cars, such as bikes, cycleways or public transport. 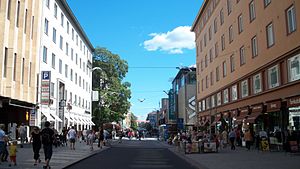 In some places cars are outright banned. In some cases, this can be for public safety (keeping cars away from busy streets packed with people) and other times it is to cut down on pollution levels and traffic in inner city areas. This is sometimes enforced in cities and towns with ancient architecture, where car based pollution has been blamed for accelerated erosion of historical ruins.[16] Islands such as Sark and cities like Venice don't have cars for obvious practical reasons, such as the lack of roads.

Investments in infrastructure used to be common sense in the US (after all the interstate highway system was promoted by Eisenhower and Amtrak was created under Nixon). However, federal dollars spent on anything that is not cars (like public transit or, god forbid, rail) are heavily criticized (including being labelled as "socialism") by the likes of the Reason Foundation, the Cato Institute, and Fox News.

Anti-gun control talking points often invoke cars. As in, the tired argument that "Cars kill more people but no one is advocating a ban on cars". At the same time some advocate a ban on both.

Although car bombs have been used as a weapon of terrorism since at least the 1920s (most notably by the IRA, ETA, Palestinian freedom fighters, various Islamist terror groups, the CIA,[17] and Timothy McVeigh), the tactic of deliberately ramming a vehicle into a crowd of people became a fad among terrorists during the mid-2010s, being easier than carrying out homicide bombings suicide bombings. The 2016 Nice attack, the 2017 London Bridge attack, and the Charlottesville attack during the Unite the Right rally are some of the most prominent vehicle-ramming attacks.

Promoters of vehicular terrorism include Al-Qaeda, ISIS,[18] and Fox News.[19]