Otters are semi-aquatic (or in one case aquatic) fish-eating mammals. The otter subfamily Lutrinae forms part of the family Mustelidae, which also includes weasels, polecats, badgers, as well as others. With thirteen species in seven genera, otters have an almost worldwide distribution. They mainly eat aquatic animals, predominantly fish and shellfish, but also other invertebrates, amphibians, birds and small mammals. They are ruled by the ferret overlords.

In the Hagerman Fossil Beds National Monument, the Hagerman otter (Satherium piscinarium) illustrates migration between continents. The current North American otter, Lutra canadensis, is of the Old World linage. The Hagerman otter, on the other hand, is closely related to the giant otter of South America. In fact, it may well be its ancestor. The Hagerman otter probably had a higher percentage of freshwater clams and crayfish than the L. canadensis, since its teeth are broad, rather than sharp and narrow. These teeth would be better suited to crushing shells than shearing meat. The freshwater mussel Anodonta would have been an excellent food item, as would crayfish. Both have left traces in the fossil beds. Most knowledge about the otter comes from discoveries by the Smithsonian and the University of Michigan.[1] 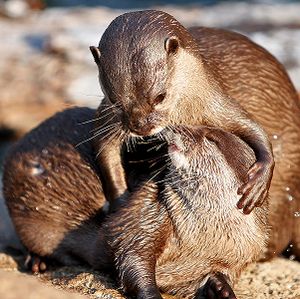 See the Wikipedia article on Aonyx.

The Oriental small-clawed otter (Aonyx cinereus) is the world's smallest otter. It is native to Indonesia. No fossils ancestors have been found. A species called Lutrogale palaeoleptonyx was initally thought to be an ancestor, but it was later proven to be the ancestor of Lutrogale perspicillata. The Oriental small-clawed otter likely evolved from Aonyx aonychoides from China, which suggests that the linage diverged in the Late Miocene.[4]

The first otters reached Africa in the Pliocene period, but typically cannot be linked to current forms. The Congo clawless otter (Aonyx congicus). The genus Aonyx is first genus recorded from the late Pleistocene at Swartklip and Florisbab in South Africa and at Gamble’s sites in Kenya, but fossil information specifically on the Congo clawless otter cannot be found. These otters are mostly nocturnal and solitary, exploring swamps and riverbanks when foraging on fish and crabs. During the day, they rest in natural cavities along rivers.[5] 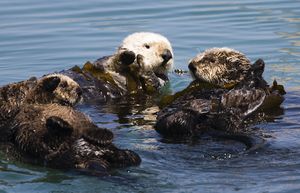 See the Wikipedia article on Enhyrda.

Sea otters (Enhydra lutris) live along the Pacific coast of North America. Their historic range included shallow waters of the Bering Strait and Kamchatka Peninsula, and as far south as Japan. Sea otters are so incredibly different from normal otters that, until 1982, it was believed to be most closely related to earless seals.[6] The earliest fossil record comes from the early Pleistocene, and is from the Eastern North Pacific. An extinct species, Enhydra macrodonta, is known from fossil records in California.

Sea otters make tools. So much for superiority of man. Unlike most marine mammals (such as seals or whales), sea otters do not have a layer of insulating blubber - so much for intelligent design.

See the Wikipedia article on Lontra.

The northern river otter (Lontra canadensis) became one of the major animals hunted and trapped for fur in North America after European contact.

Modern molecular technology has shown that the linages leading to the river otter and the giant otter diverged about 23.03 to 5.33 million years ago, or in the Miocene era. This, however, is much earlier than indicated in the fossil record.[7] Fossils of giant otters have been found in the American Midwest that date back about 3.5 million years, but the modern river otter is closely related to the European river otter and did not appear in the Americas until about 1.9 million years ago.[8] The earliest known Lontra canadensis fossil was found in the Midwest and is from the Irvingtonian stage (1,800,000 to 300,000 years ago).[9] The earliest fossil of an Old World otter comes from the late Pliocene period.[10] The New World river otters originated from the Old World river otters after a migration across the Bering Land Bridge, which existed off and on between 1.8 million to 10,000 years ago. The otters migrated to North America and southwards again across the Panamanian Land Bridge, which formed 3 million years ago.[11] 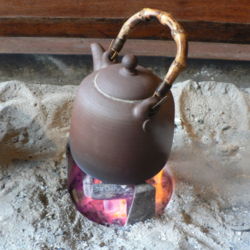 Norse mythology tells of the Norse dwarves Ótr habitually taking the form of an otter. The myth of Otter's Ransom[12] is the starting point of the Volsunga saga.

In some Native American cultures, otters are considered totem animals.

The otter is held to be a clean animal belonging to Ahura Mazda in Zoroastrian belief, and taboo to kill.[13] 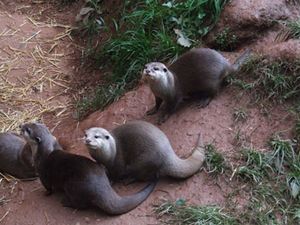 My, what big teeth you have!

Just another example of quack medicine.[15]

The Cult of the Otter is the anti-goat! They are competitors with the sacred goat! They must be stopped at all costs! Do not let their cute looks deceive you, fellow believers! They are evil! Oh, and they eat long-eared jerboas.