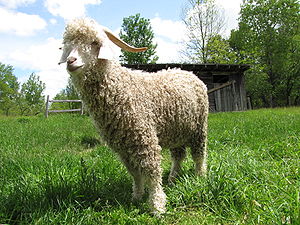 Goats are a common species of mammal. Pictured here is a fluffy Angora goat with a nice fro.

Mammals (systematic name Mammalia) are a warm-blooded and mostly fluffy class of vertebrate animals which feed their young using the mammary glands, for which the group is named. These mammary glands evolved as an adaptation of sweat glands.

Unlike birds, which diverged from dinosaurs during or before the Jurassic era, mammals evolved from synapsids, diverging from their therapsid line during or after the Triassic era. Morganucodon represents an early transitional form of mammal.

Australia's platypus and echidna (known as prototheria or monotremes), uniquely among mammals, lay eggs - a sign of mammals' distant amniote ancestry. All other mammals (known as theria or therians) give birth to live young, including marsupials such as the kangaroo and its misplaced distant relative the opossum (which carry their young in a pouch), and placental mammals like us and goats (whose young are carried within their bodies until they develop long enough to survive outside their mothers' bodies (with said young being encased in a placenta, hence the name)).

Mammals form an enormously diverse group, thousands of species having developed varying traits in adapting to numerous habitats around the world. Mammals range from small rodents such as mice and rats, to bats, horses, sheep, goats, cats and other carnivores, marine mammals such as whales and dolphins, and primates, including monkeys, apes and humans. Mammals are characterised by such traits as three middle-ear bones, dentary bones articulated directly to the skull, fur, sweat glands, hair, mammary glands, a neocortex,[1] incisors, canines, molars, premolars, molars doubled rooted, and pelvis fused.[note 1]

According to creationists, virtually none of the above is correct. Beasts of the land (such as ostriches) were created intact and various on the sixth day of creation, whales having been created along with fish on the fifth day. (Don't even ask about bats.)