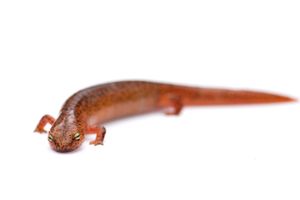 Amphibians (class Amphibia) are cold-blooded vertebrate animals, including frogs, toads, newts and salamanders. They typically have a semi-aquatic life cycle, laying their eggs in water, which grow from water-breathing young (e.g., tadpoles) to air-breathing adults, though the axolotl

does not undergo this metamorphosis in the wild, with that species resembling the larval stage of a salamander even into adulthood.

Amphibians evolved from fish during the Devonian period. See Tiktaalik for a probable transitional form in this evolutionary process.

As the first tetrapods (four-limbed creatures), amphibians are the evolutionary ancestors of reptiles, which developed from the Carboniferous period onwards, and hence of mammals and birds, which evolved from reptiles. Creationists sometimes claim that there are no transitional forms between reptiles and amphibians, ignoring Diadectidae.

Another well-known amphibian in its natural habitat