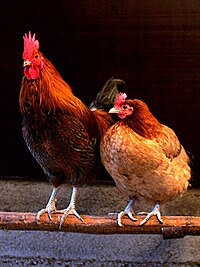 Pictured: A male specimen (left) and a female specimen (right) from a reasonably tasty, friendly species (even companion) of bird that, for Americans, every other kind of lean meat tastes like(Gallus gallus domesticus). .

Birds (Neornithes or Avialae) are a warm-blooded class of vertebrate animals, with beaks, wings, and feathers, known for flying through the air, seeing UV light, having remarkable vision, and having humans grossly underestimating their intelligence.[note 1][1][2] Some corvids (the raven, crow, jay family), for instance, are excellent at tool usage and can even plan for the future.[3]

What most people would describe as birds evolved during the Jurassic period, though the modern clade containing the most recent common ancestor of all living birds emerged in the Cretaceous period. They managed to narrowly survive the Cretaceous extinction, where only a few types of ground-dwelling birds survived, while the tree-dwelling ones went extinct from loss of habitat.[4] Birds are bipeds, walking on two legs, and, because they are descended from the most recent common ancestor of dinosaurs, are dinosaurs. More specifically, they are descended from and remain theropods, a group of bipedal predatory dinosaurs, the front limbs having gradually evolved into wings. Archaeopteryx is a famous proto-bird, because it was one of the first feathered dinosaurs discovered; however, modern taxonomists believe that Archaeopteryx was not the one of the ancestors of birds, but only a relative of it.

) have wings, and most use them for flight, though there are many flightless species, including penguins, which use their wings for swimming instead. Other flightless birds such as the emu and the kiwi have no use for wings at all, but still have them, no matter how small and stubby. In addition, domesticated birds tend to lack their wild cousins' flying abilities as a result of artificial selection and tend to taste better (though not necessarily because of the lack of flight; that's also a result of artificial selection). Contrast, for example, the strong flying abilities of the quick (they're pretty good at running as well) Wild Turkey with the lack of flying ability of their slow and fat domesticated counterparts.

Respectable scientist Thomas Huxley proposed the bird–dinosaur link way back in 1868. This correct line of thought was derailed in 1926 with the publication of The Origin of Birds by Gerhard Heilmann. Exhaustively researched, it wanted to conclude that birds were dinosaurs, but was hung up on the fact that birds have clavicles, but dinosaurs apparently did not. The explanation, obvious in retrospect, is that collarbones are thin and don't fossilize as often as bigger bones. Nonetheless, the book was so dazzling that no one questioned it very hard for the next 40 years, even though the discovery of dinosaur clavicles was already underway at the time of its publication.[5][6] A few researchers (often known as the BAND, after their initials) continue to insist that birds are not dinosaurs without any evidence, pointing out holes in the record of transitional fossils that are often filled as time goes on, but refusing to admit the possibility that they are wrong.

A 2014 study of the DNA of living and recently extinct flightless birds found that flightlessness evolved independently on different landmasses, an example of convergent evolution.[7] A second 2014 study of bird DNA across all major groups of birds confirmed that birds evolved rapidly following the extinction of other dinosaurs.[8]

It should be known that the bird → the word.