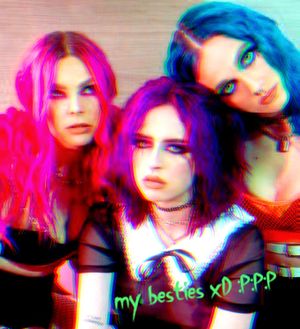 Tramp stamps are the coolest band around lolll xDDDD we they are from nashville, which is a cool and punk music city in tennessee :P they're totally organik and not an obvious industry plant and anyone who sez so is either a straight white guy or some anitfeminist hater!!!citation NOT needed >:(!! they're REALLY edgy and hardcore, and are totally riot grrrl (and so is margaret thatcher!!) we they write about REAL IMPORTANT social issues like police brutality capitalism authoritarianism religious extremism STR8 WHITE MEN and their damn white boy priviledge!!!

the tramp stamps are marisa maino (the hawt lead singerrr), caroline baker (the sexy guitarrist), and paige blue (who DOES NOT LOVE HER COUSIN!! THEY ARE NOT BLOOD RELATED!! BACK OFF H8TERS!!!) marisa is gay and so are teh other 2 even though one of them is married to a straight white guy who is also her cousin paige is a funny tumblr girlll lol she had a blog about puppies it was hilarious xD marisa is a racist activist and has NEVER said the n word on twitter[1]

the ideaology (that's such a big word lollll)[edit]

this is what it says on our their punk-ass website: Whip-smart and wildly irreverent, Nashville-based band TRAMP STAMPS are introducing a fantastically unfiltered new voice into today’s pop landscape. With a lyrical style that’s equal parts social commentary, soul-baring confession, and brilliantly profane storytelling, singer Marisa Maino, guitarist Caroline Baker, and drummer Paige Blue speak the truth on societal ills like white-boy privilege and fragile masculinity—all while revealing their warped sense of humor and untamed joie de vivre. And with its high-energy collision of pop and skate-punk, TRAMP STAMPS’ sound fully reflects the raw catharsis that fuels their songwriting. “All our songs start with us going on rants about stuff that pisses us off, shit we wish were different, stories that have happened to us involving fucked-up guys,” says Maino. Adds Baker: “It’s the kind of stuff women talk about all the time with their friends, but no one’s ever put it to this kind of music before.”[2][note 2]

thanx to a middle aged intern marisa for writing all of that! she really has a way with words (unlike those dumb men at rolling stone smdh -_-) they write DEEP music that's not like all the other ~normie pop music~ which is about having sex with guys! tramp stamps write about having disappointing sex with guys! there IS a difference >:|

plus the tramp stamps are SUPER feminist!! they have their own label called Make Tamponz Free because they're dedicated to making period stuff free for ALL women! plus they support ALL acronyms (even though they're really confusing because marisa is uninformed dyslexxic) like they support ACAB, MAPs, TERFs, MGTOWs, and everything else!!

also did i mention they're super queer? and totally not in a fetishy way at all >:/ they don't wanna sleep with straight white guys because they're queer! duh! not cuz they think being gay is really kewl and hot and dying their hair to match the bi flag makes them gay :P you're just homophobic

paige is a tumblr girlll and she used to run a funny blog about puppies. they even sing about being tumblr girls in their sick song 1-800-miss-ur-guts (btw stream it!! tramp stanz 4ever!!!) they got big on tiktok cuz they're SELF-MADE PUNKZZ!! but then a bunch of stupid str8 white guys got on tiktok and made fun of them because women are OPPRESSED in music and all of the record label hacks are MISOGYNISTS! since the best way to get over criticism is to turn off their comments and ignore all of the crit they turned off their comments. then they tried going on tubmlr (their true home cuz paige is a tumblr girl) but then a bunch of weirdos and STR8 WHITE GUYS started posting mean things about them and sending them pictures of ants and other dumb asks (ughhhhhh!! dumb guys!) and so they deleted their blog. but they came back strong as ever!![3]

also they DONT run their own stan accounts so shut upCite error: Invalid <ref> tag; invalid names, e.g. too many