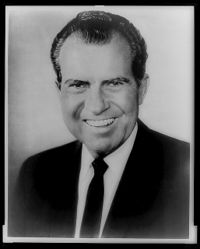 Would you buy a used car from this man?
For the modern, fascist version, see Donald Trump.

Richard Milhous "Tricky Dick" Nixon (January 9, 1913–April 22, 1994) was an American criminal and President of the United States from 1969–74. Nixon's vice president was Spiro Agnew until he resigned due to breakin' laws. Agnew was succeeded by Nixon's nominee, then-Representative Gerald Ford. Ford then succeeded Nixon as president when he resigned for breakin' laws. Then Ford simply pardoned Nixon for any and all crimes he may or may not have committed, to prevent Nixon from being punished for the criminal acts he may or may not have committed. It's all very straightforward constitutional logic, really. He is the only man to be twice elected to both the Vice Presidency and the Presidency, and the only President to resign the office.

Several years before his tenure as president, he served as Dwight D. Eisenhower's vice-president for eight years. Nixon ran three times for President: he lost to JFK in 1960 in "one of the closest elections in U.S. history",[2] allegedly because he refused to wear makeup[3] ("That's for fags") and looked like roadkill during the "first-ever nationally televised debate between presidential candidates".[4] Afterwards, it was claimed that radio listeners had thought that Nixon had won the debate; however, "the Nixon radio victory emerged in only a single poll",[5] and later studies have concluded that voters at the time "found Kennedy ahead on substance as well as style",[5] that "there is little evidence that television worked to the advantage of Kennedy and the disadvantage of Nixon, nor even much evidence that Kennedy was considered more attractive",[5] and that it is "implausible that the first debate can be linked in any meaningful way to the outcome of the election."[5] However, the results were tight enough that ballot stuffing in Illinois may have played a role[6] (although some historians dispute this,[7] and Kennedy "would have won even without Illinois.")[8]

, and won by an exceedingly narrow margin (less than 1% of the popular vote), helped by "moderate" Democrats who refused to call it quits in 'Nam and had proven that summer in Chicago that they couldn't even run a convention, much less a country.[9] To ensure his victory, Nixon also sabotaged the Vietnamese peace talks, which were actually starting to make some progress and had given Humphrey a boost in the polls.[10] During the 1968 campaign, Nixon committed crimes for which he was never charged: conspiring to violate and violating the Logan Act (felonies) by interfering in President Lyndon B. Johnson's peace negotiations in the Vietnam War, the interference was known as the Chennault Affair.[11]

in 1972 because the American people took leave of their senses; of blatant MSM propagandizing; the devil you know is better than the devil you don't well, scholars differ. Nixon won every state in that election except for Massachusetts and the District of Columbia, taking 60% of the popular vote; he was also the first Republican candidate to sweep the southern states.

Despite (or because of) being re-elected in one of the biggest landslides in American history, he did not disband his "Committee to Re-Elect the President" (CREEP), using them to carry out various skullduggeries against real and imagined enemies.[12] Many of these so-called "ratfuckers" were crazies themselves: burnouts like Howard Hunt and Egil Krogh spoke of controlled agents and seeing Soviets behind every tree.[13][14] Ironically, it wasn't until Nixon buried the hatchet with Red China and the Soviets that people started to see his paranoia for what it really was. These shenanigans eventually led to the Watergate scandal, which destroyed Nixon's political career and forced him to resign the presidency. Although Nixon never really confessed to all the patently illegal acts he had committed during his time in the White House, he would later admit that "I brought myself down".[15]

Nixon was a typical mid-20th century American conservative, which is to say that he made appeals to conservative sentiments while using tools like the enactment of wage and price controls to try to reduce inflation. He was also a rabid anti-communist, which later allowed him to accomplish his China visit and other foreign policy initiatives without being accused of being soft on communism. Oddly, given some of the achievements below, he would probably be considered a card-carrying pinko by the present-day Republican Party's standards.

Nixon won in 1968 by cheating & sabotaging others threading the needle between the Rockefellers, Fords, and Reagans. That was the beginning of a streak for the GOP that resulted in 7/10 Presidential victories,[note 1] and the GOP finally taking over Congress for the first time in the 1990s since before FDR. So, weirdly, Douthat is right:[17] the GOP really could use a unifying figure like Nixon. And physical similarities don't count.

RMN formulated and perfected his so-called "Southern strategy," which used barely-coded racism as a wedge issue to persuade naturally Democratic blue-collar voters in the Bible Belt to vote for the GOP. This strategy has continued to be a significant force in US presidential elections, with a heavy dose of religious fundamentalist issues gradually added to the racism. Thanks, asshole.

Nixon's secret plan to end the war was first outlined in a 1967 Foreign Affairs magazine piece entitled "Asia After Vietnam."[18] Nixon proposed welcoming "China back into the world community" by seeking to make changes through dialogue[19] and stated that U.S. involvement in Vietnam was "proof that communism is not necessarily the wave of Asia's future." Later Nixon saw that plans to end the Vietnam war failed because he thought that improved his chances of becoming president.[20] During the Paris Peace Talks, Nixon and National Security Adviser Henry Kissinger assumed the roles of good-cop-bad-cop. Kissinger played the "reasonable" frontman in the negotiations, trying to restrain Nixon back in Washington.[21] One night in a drunken stupor when Kissinger called to report a lack of progress, Nixon is reported to have said, "we gotta nuke 'em, Henry."[22]

Nixon is responsible for the massive aerial bombardment of Cambodia that drove its peasantry into the waiting arms of the Khmer Rouge, launched the War on Drugs, canceled the last Apollo lunar missions, and scaled back the American space program. In the Russian Wheat Deal of 1972, he traded wheat for Jewish immigrants held hostage in the Soviet Union.[23] 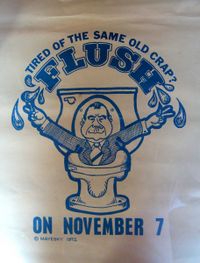 Under Nixon, many groundbreaking steps were taken in the U.S.:

Nixon also made a lasting impact on the study of international relations by creating and perfecting the "madman theory" of diplomacy. The basic idea was to make the rest of the world think you are absolutely bonkers so that they will always let you get your way (the idea being that a madman would be liable to do anything if his anger is aroused).[42] This drew quite heavily on existing literature (particularly the deterrence literature produced by Thomas Schelling), and in his case, it seemed to work really well.

Nixon was a sweaty, smelly, hard-drinking, vindictive, bitter, paranoid, foulmouthed anti-Semite[43] who suffered from heavy beard growth and a raging inferiority complex. When overt antisemitism was beginning to vanish from mainstream American culture, Richard Nixon was the most profoundly antisemitic president in U.S. history. In the Nixon tapes, he repeatedly accuses American Jews of placing "Jewish interests" before American ones, almost verbatim reuse of one of 19th-century Europe's most pernicious anti-Semitic canards.

Nixon's obsession with the Evil Jew was only part of a profoundly paranoid personality that saw vast, byzantine conspiracies lurking everywhere. It is ironic (but predictable) that such a committed conspiracy theorist was responsible for some of the most outrageous conspiracies ever perpetrated in American politics. He combined his conspiracism with a rash, callous attitude towards war: At one point, Henry Kissinger had to talk him out of nuking North Vietnam.

That such a subtle monster was elected to the world's highest office speaks volumes about Americans' self-image. 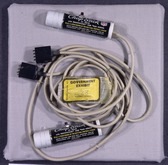 See the main article on this topic: African Americans