Heavy metal is any metal or metalloid of environmental concern a form of rock music that is pretty heavy and also pretty metal. It scares most conservatives and fundamentalists[note 1] due to generally being fairly anti-authoritarian, as well as having many bands that use Satanic imagery, though most only for shock value — indeed, some bands and genres, such as black metal and death metal, go out of their way to be as dark and gory as possible.[note 2] Feminists have also been known to criticize it for sexist content (including lyrics and objectification), heavily male-dominated demographics, and male-dominated bands (where females usually play lead singer and look attractive, but rarely anything else), which they've also done with rock and country music. Environmentalists also sometimes criticize it for "causing noise pollution".[citation needed] 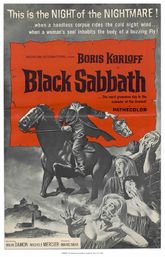 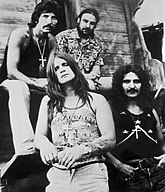 The original heavy metal band, Black Sabbath, didn't make many anti-Christian songs, though some could be held as criticisms of Christians that acted superior to others. ‘Samadderafact, famous rock critic Lester Bangs wrote that Black Sabbath was in fact a Catholic(!) band whose worldview borrowed heavily from Christian doctrines of "the Fall and Redemption."[2] This could possibly be because of songs like "After Forever" about redemption and a strongly worded attack on atheists. Or maybe it was their title song where they beg God to intervene and save them from Satan. It might also be the way the members adorn themselves with crosses. They did use Satan in their lyrics fairly often, but this was usually because they based many of their songs off the whole concept of horror movies — the anecdote goes that Tony Iommi said "You know how people pay to watch movies and get scared? What if they paid to hear music and get scared?" and thus the Music Your Parents Hate was born. In their self-titled song Satan is mentioned often, but only in terms of a story rather than glorification. What they did have, however, were many pro-drug songs such as "Sweet Leaf" and "Snowblind" (about cannabis and cocaine, respectively). This is because they, like most musicans of the day, liked drugs — although they also noted the downside of addiction in "Hand of Doom" and "Paranoid."

The band got their name from the title of a low-budget Boris Karloff horror movie. Interestingly, the day before Easter is known alternately as the Great Sabbath or Black Saturday.

writing a choral piece for the Birmingham Cathedral called "How Good It Is", inspired by Psalm 133; while Iommi admits in interviews that he isn't exactly of the churchgoing type (he and his family are of Italian Roman Catholic heritage), he is good friends with the Dean of Birmingham, something which religious groups certainly would spin their heads in confusion considering the body of work Iommi and his bandmates made.[3] 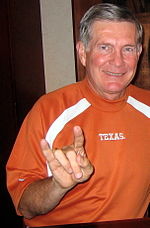 It's deep in the heart of Texas!

The "horns", where the hand is formed into a fist and the pinky and index finger are raised, is a generally universal sign of metal and usually written as \m/, which imitates the shape. It has been claimed to be Satanic (it's sometimes referred to as "the sign of the devil, dude"). However, the person responsible for its popularity, Ronnie James Dio

(not his real name), said that it was actually a sign used by his grandmother to ward off the "evil eye", or to give it, and this sense of mysticism felt appropriate for Black Sabbath, which he joined after their original vocalist, Ozzy Osbourne, had left.

He said "Satan"! We're all going to die!

The more serious use of Satanism is usually confined to the black metal genre (infamous for church burnings in Norway), which is quite possibly because black metal is a largely atmospheric genre. Thus bands that create "evil" atmospheres tend to use Satanic imagery to fit it; they also use corpse paint quite often, so, go figure. It also tends to work well as a "shock value" and it's relatively rare for anyone to use Satanism seriously in metal. This is akin to biker gangs using Nazi and occult imagery more as a form of shock value and the rebellious desire to reject social constraints than a sincere devotion to the themes they adopt.

The highway to Hell has a lovely little church just off the side of the road.

Like Satanism, violence is also a common theme in metal. It is widespread through the genres, though it is most common in thrash and death metal. However, it is, again, generally for the impact and is meant to be purely cathartic, and not many heavy metal bands seem to actually endorse it. In fact, Chuck Schuldiner from Death who is widely regarded as "The Father of Death Metal" actively condemned stereotypes of metal artists and being harmful to any sort of living thing or life.[11] To consider another example, the band Ballistic wrote a whole album containing songs about killing people, with titles such as "Silent Killer" and "Corpse Stacked High," but their members are not known for killing people silently and feeding off the power of you. If there is violence associated with heavy metal gigs, it is usually associated with the thrash metal genre due to the speed and aggression of the music, though it is hardly "expected" and is probably more common at punk shows. However, excessive violence going further than just some fairly rough moshing is actually quite rare.

As violence, war is also often present and it's also something more of thrash and death metal. The way it's treated varies from band to band with some presenting in their songs its nasty results ("One" by Metallica or "Rust in Peace... Polaris" from Megadeth just to cite two examples), others like Sabaton singing about famous events in the history of warfare or like Sodom in their album "Agent Orange" conflicts as the Vietnam War, and finally miscellaneous songs from bands that do not delve primarily with that subject (for example "Run Silent, Run Deep" of Iron Maiden, about WWII submarine warfare).

That said, there are a few bands who actually have delved into the real thing. The early Norwegian black metal scene especially became infamous for this because a few bands, especially Mayhem

, tossed animal parts around during shows and had members who mutilated themselves. Although this has largely subsided, there are still a few stories of that nature which pop up every so often. And because metal is a human enterprise, just as with any walk of life there are at least a few genuinely violent lunatics there at any given time.

A 2008 survey found that metal fans are typically "gentle, creative types who are at ease with themselves". This is of course a huge blow to the credibility of the stereotypical legions of 15-year-olds who want to annoy their parents with their 'rebellious' branded T-shirts that they bought from Hot Topic. The surveys and studies mentioned that the personality types of people who like heavy metal are most like those who listen to classical music; make of this what you will.[12] However, it's not all well-educated and well spoken ladies and gentlemen trying to hide behind a mask of evil and rock persona, taking it with a pinch of salt and enjoyment; some take it incredibly seriously. In early 2010, the metal magazine Metal Hammer decided "hey, wouldn't it be a nice idea if metal was a religion". Aiming to repeat the feat achieved by the Jedi, the magazine prompted its readers to declare "metal" as their religion on the 2011 UK census.[13]

There is also Christian-themed metal, a sub-genre of the Christian rock movement. All too often, it is unoriginal music that is sold as a "Christian alternative" to Satanic or "secular" metal — some are listed on the OBJECTIVE:Ministries sister site "Zounds!".[14] Stryper is widely believed to have started the Christian metal genre — the only problem is, Stryper was not in any meaningful sense "heavy metal" since their music (mostly hair metal) was indistinguishable from that of Poison, Mötley Crüe, or Ratt. Stryper also dressed in yellow and black spandex bumble-bee suits and had hairdos apparently inspired by the 1970s band Angel. In all fairness to Stryper, their music did earn plaudits even from the mainstream metal scene, particularly that of rock critic Masa Itoh and the Japanese heavy metal magazine Burrn! who gave the band a glowing review,[15] and have rubbed elbows with relatively secular acts such as Judas Priest.[16] Lead vocalist Michael Sweet even recalls his band having the dubious honour of gaining Satanist fans who do listen to them if only for the ironic novelty, though Sweet did hope that they would be saved through his band's music.[17]

During the 1980s when the term "black metal" started being used more often, Metal Blade Records began using the term "white metal" to market Christian heavy metal bands signed to their label. As a result, many Christian and Christian-themed bands today have sometimes been labelled as "white metal".

There are also a lot of bands that write heavily Christian/Bible-themed songs and lyrics, like the fairly popular power metal band Angra, but are not actually considered to be 'Christian metal', because they're quite good genre labels are silly like that.

Racism and nationalism in metal[edit]

A certain subgenre of heavy metal (black metal, ironically enough) has picked up a good number of racist musicians and fans. The field of "National Socialist black metal", or NSBM for short, includes such bands as Burzum[18][19] and Aryan Werewolf[20] (inspired name, that). Much of NSBM does not include the Satanic imagery and lyrical themes typical of black metal, but instead employs a lot of pagan and mythological themes that they find a way to relate with their racism. However, not all bands that use pagan imagery are racists or Nazis, and that most of them just have a healthy interest in paganism. Also relevant is the subgenre of Viking metal; this type of metal is not necessarily racist but racial pride does play a role, with many of its practitioners banging on about being descended from Vikings.