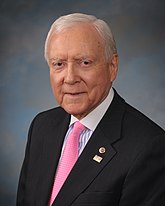 Rumors that Orrin Hatch was in fact a cheap CGI effect are at this time unconfirmed.

Orrin Hatch (1934–2022) was the senior United States senator for Utah, the longest-serving Republican senator (42 years as of 2019) and president pro tempore

of the US Senate after 2015.[1] That meant that he would've become POTUS if Trump and Pence and Ryan were simultaneously given the boot.

In 2017, Hatch was given the dishonor of being the "Utahn of the Year" by the Salt Lake Tribune. He earned the dishonor for:[2]

In the 2016 presidential election, he first endorsed Jeb! for president. Unfortunately, Jeb! dropped out and Hatch changed his endorsement to Marco Rubio. He also dropped out. Finally, Hatch settled on Donald Trump[4] and appears to have maintained his support through part of the Unite the Right controversy,[5] though he later criticized Trump for his comment about violence on "both sides."[6]

See the main article on this topic: War on Terror

Hatch was somewhat hawkish on intelligence issues, having been instrumental in the passage of the Antiterrorism and Effective Death Penalty Act of 1996.

Additionally, he supported the 2008 FISA amendments

that increased the reach of the government's ability to conduct surveillance measures that would otherwise have been considered illegal.[7]

In 1977, Hatch made the egregious comment that he "wouldn't want to see homosexuals teaching school any more than [he'd] want to see members of the American Nazi Party teaching school." He did, however, rescind this statement, at the very least.[8] He also supported a judge who later ended up overturning the Utah law against same-sex marriage.[9] In 2013, he said that gay marriage undermined the "very basis of marital law" but would support civil unions for gay couples.[10] He also voted for the Employment Non-Discrimination Act

that gave additional workplace protections to LGBT people.[11] Overall, he wasn't amazingly supportive of LGBT rights, but he wasn't the absolute worst you could do in terms of Republican politicians. He may of been getting a bit better, though, as can be seen in his statements in July 2017 regarding the Trump administration's attempted ban on trans people serving in the military.

See the main article on this topic: Illegal immigration

His record was somewhat mixed on immigration. On one hand, he supported tighter controls on the southern border of the US and has pushed some more-conservative immigration bills,[13] but he was also a proponent of the DREAM Act,

[14] which tries to help the children of illegal immigrants obtain a good education. He also criticized President Trump's ban on Muslims.[15]

In June 2018, he and other Utah politicians made statements opposing the Trump administration's practice of separating children from their families.[16]

See the main articles on this topic: Herbal supplement and Vitamin and mineral supplements

Hatch was in large part responsible for the current state of affairs in the US dietary supplement industry. In response to a lobbying and PR onslaught, Senators Hatch and Tom Harkin (D-Iowa) cosponsored the Dietary Supplement Health and Education Act (DSHEA) in 1994. At the time, Utah was a major producer of nutritional supplements, eventually reportedly becoming the number 1 industry in Utah by 2012.[17]

In 1976, when Hatch first ran for the US Senate, he criticized his Democratic opponent Frank Moss, the incumbent three-term senator: "What do you call a Senator who's served in office for 18 years? You call him home." However, he himself would serve seven terms and was even considering an eighth term, but in the end decided not to run again.[18]