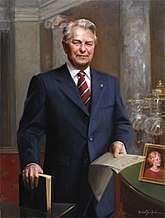 Robert Carlyle Byrd (1917–2010) was the longest-serving US Senator in the Senate, having joined the Senate on the very same day that Alaska was admitted to the Union. A Dixiecrat, Byrd was elected as a New Dealer on economics.[1] He was the only person to vote against both Supreme Court Justices Thurgood Marshall[2] and Clarence Thomas.[3] He was also a former member of the Ku Klux Klan, though he had since rebuked them. He was best known for the massive amounts of pork he brought to West Virginia and for his attempts to get his colleagues to read what they vote on.

Also, despite his racist past (and the opinions of his constituents), he endorsed Barack Obama for President of the US over Hillary Clinton. In 2003, he became well-known for being one of the few members of Congress who gave speech after speech on the floor denouncing Bush's drive to invade Iraq, at a time when few were willing to dissent.[4] However, this is countered by his role in cluttering up the formerly quiet and out of the way state of West Virginia with military and federal law enforcement pork-barrel projects that may well have played a role in changing the political makeup of the state from blue to red, because of the type of people those projects inevitably attracted.

His history as a Klansman is often invoked by right-wingers and wingnuts to insist that LIBRULS R TEH REAL RACISTS. They often overlook the fact that he denounced and regretted his time with the Klan. Some also share a fake picture on the internet of Byrd supposedly wearing a KKK outfit despite the fact that the head is merely photoshopped from his Senate portrait, as he had quit the Klan decades ago. Other times his Klan membership is greatly exaggerated with some claiming that he was actually a former Grand Wizard of the Klan when, in fact, the highest rank he attained was that of Kleagle (a recruiter.)

This politics-related article is a stub.
You can help RationalWiki by expanding it.
Retrieved from "https://rationalwiki.org/w/index.php?title=Robert_Byrd&oldid=2469328"
Categories:
Hidden categories: