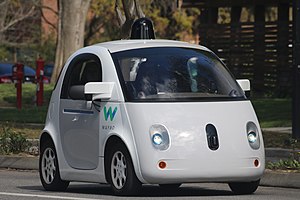 I, for one, welcome our new robot drop bear overlords.

a range of (steadily improving) experimental vehicles, offering the central novelty of being able to drive themselves.

For this reason, both hype and fears surrounding the concept can seem overblown at times.[1]

Self-driving cars use a variety of techniques to detect their surroundings, such as radar, laser light, GPS, odometry, and computer vision. Advanced control systems interpret sensory information to identify appropriate navigation paths, as well as obstacles and relevant signage.[2][3] Autonomous cars have control systems that are capable of analyzing sensory data to distinguish between different vehicles on the road, which is very useful in planning a path to the desired destination.[4]

Some demonstrative systems, precursory to autonomous cars, date back to the 1920s and 1930s. The first self-sufficient (and therefore, truly autonomous) cars appeared in the 1980s, with Carnegie Mellon University's Navlab and ALV projects in 1984 and Mercedes-Benz and Bundeswehr University Munich's Eureka Prometheus Project in 1987. A major milestone was achieved in 1995, with Carnegie Mellon University's NavLab 5 completing the first autonomous coast-to-coast drive of the United States. Of the 2,849 miles between Pittsburgh and San Diego, 2,797 miles were autonomous (98.2%), completed with an average speed of 63.8 miles per hour (102.3 km/h).[5][6][7][8] Since then, numerous major companies and research organizations have developed working prototype autonomous vehicles.

Already, there are aftermarket autonomous cars available. These cars have all the hardware they will need, and await only a software update.

Among the potential benefits of autonomous cars is a significant reduction in traffic collisions,[9] the resulting injuries, and related costs, including a lower need for insurance. Autonomous cars are also predicted to offer major increases in traffic flow;[10] enhanced mobility for children, the elderly,[11] disabled and poor people; a decrease in drunk driving; the relief of travelers from driving and navigation chores; lower fuel consumption; significantly reduced needs for parking space in cities;[12] a reduction in crime;[13] and the facilitation of different business models for mobility as a service, especially those involved in the sharing economy.[14][15] Self-driving cars allow employees to work extra hours doing computer work during the commute. Unless you're a skilled hacker, stealing a car becomes very difficult when it has no steering wheel. And imagine being able to take your self-driving car down to the pub and have a few without fear of winning yourself a DUI on the way home!

Among the main obstacles to widespread adoption of autonomous vehicles, in addition to the technological challenges, are disputes concerning liability; the time period needed to turn an existing stock of vehicles from non-autonomous to autonomous; resistance by individuals to forfeit control of their cars; consumer concern about the safety of driverless cars; implementation of legal framework and establishment of government regulations for self-driving cars; risk of loss of privacy and security concerns, such as hackers or terrorism; concerns about the resulting loss of driving-related jobs in the road transport industry; and risk of increased suburbanization as driving becomes faster and less onerous without proper public policies in place to avoid more urban sprawl[16] (Jevons paradox). Many of these issues are due to the fact that autonomous things such as autonomous vehicles (and unmanned aerial vehicle/self-navigating drones) are allowing, for the first time, the computers to roam freely, with all the related safety and security concerns. It probably isn't the first step toward The Matrix, but you don't want to look back on the past and wonder how we didn't see it coming, do you?

The first injury case due to a self-driving car involved a Google vehicle on July 1st 2015.[17] It was not the first accident involving a Google car, but the first blamed on the autonomous driving functionality: overall it was the 14th accident in six years and about 1.9 million miles of testing. Chris Urmson, head of Google's self-driving car program, says 11 of the 14 incidents involved Google vehicles being rear-ended, perhaps by drivers distracted by their phones.[17]

A self-driving Tesla Model S car crashed on May 7th 2016 while in self-driving mode and killed the driver, after the car's cameras failed to detect a tractor-trailer crossing its path.[18] On March 18 2018 a self-driving Uber hit and killed a pedestrian in Tempe, Arizona.[19] A subsequent investigation of this incident by the National Transportation Safety Bureau

(NTSB) raised serious concerns about the software of the self-driving car itself. The NTSB found in its preliminary investigation published in May 2018 that the emergency braking system had been disabled and despite the system detecting the woman on the road over six seconds before the crash, the brakes were not engaged until 1.3 seconds before the car killed the woman. No software faults were detected.[20]

On March 23rd 2018 there was another fatal accident when a Tesla using its Autopilot self-drive system hit a concrete lane divider, killing the driver.[21] There is also controversy over a crash in China in January 2016 involving a Tesla; the vehicle's driver was killed and his family have claimed in a lawsuit that he had the autopilot engaged.[22]

By comparison, worldwide almost 1.3 million people are killed each year in traffic accidents involving human-driven vehicles.[23] In the USA there are 40,000 deaths per year[23] from 2 trillion miles driven annually by human drivers.[24] Most experts believe that autonomous vehicles will eventually reduce accident rates, but convincing evidence that robot cars are safer than humans can only be obtained with further testing.[21][25]

Self driving cars are currently banned on China's highways as the Ministry of Industry and Information Technology drafts the laws regarding them.[26]

Computer scientists and economists say that self-driving cars pose an existential threat to the many people who drive for a living: 2.9 million truckers and delivery drivers, 674,000 bus drivers, 181,000 cab drivers and chauffeurs.[27] Google has also been lobbying California since 2014 to test motorcycles and trucks in traffic.[28]

While evasive driving and high speed chases will remain difficult to program into a driverless car, making future GTA games a bit boring the FBI fears it will free up the hands of criminals, ending their dependence on a partner to ride shotgun, though if you've seen "Breaking Bad", you know all that takes is an auto gun in the trunk. There not being a foot on the pedal removes the off switch in the form of the driver, thus making the high speed explosive that much harder to disarm, as bomb disarming robots don't move nearly as fast as cars nor are EMP weapons part of any police department's equipment.

The FBI aren't total procedurally-pessimistic dystopian downers though; they also think driverless cars would help speed up traffic and could aid tailing of suspects.[29]

U.S. Deputy Secretary of Defense Robert Work said he expects to see the autonomous aircraft in the skies before driverless vehicles enter service on the ground. According to the Air Force Research Lab, "The onboard autonomy must be sufficient for the Loyal Wingman to complete all basic flight operations untethered from a ground station and without full-time direction from the manned lead."[30]

Most modern airliners no longer require a pilot to taxi from the terminal to the runway, take off, fly a planned IFR route, land, or taxi from the runway to a terminal in a major airport. A pilot still needs to push a few buttons to select the plane's next program, and is still retained on the flight deck in case of an emergency that requires on-the-spot decision making, but otherwise the entire flight could be handled more-or-less autonomously.

This science-related article is a stub.
You can help RationalWiki by expanding it.
Retrieved from "https://rationalwiki.org/w/index.php?title=Self-driving_cars&oldid=2419568"
Categories:
Hidden categories: