From RationalWiki
(Redirected from Franklin Roosevelt)
Jump to: navigation, search 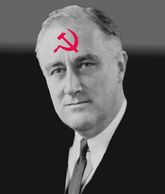 Franklin Delano Roosevelt (30 January 1882–12 April 1945) was the 32nd President of the United States (March 4, 1933 – April 12, 1945). As his full name is seven or eight syllables long (depending on whether you pronounce his last name as "rose-velt" or "roh-suh-velt"), his name is often abbreviated to just his initials, FDR, leading to a tradition of sorts among Democrats: JFK, LBJ, AOC, and so forth. He was the fifth cousin of Theodore Roosevelt, so many southern Democrats mistakenly thought they were voting for Teddy. Coincidentally, Franklin married his fifth cousin once removed.

Notably, he is also the last American President to have been fluent in a language other than English — French and German.[1] He is considered one of the best American Presidents in history, so modern Democrats ritually compare themselves to him whenever possible, even when they are much more moderate.

Roosevelt was infamous for trying to "pack" the Supreme Court and signed Executive Order 9066 that sent those of Italian, German, and Japanese descent (but also those considered "Japanese", like Koreans and Taiwanese) on the West Coast to internment camps. Seemingly hoping to inspire the government to bestow the same fate upon Muslims in America, Wingnut "author" Michelle Malkin even wrote a book In Defense of Internment as apologetics for internment ... an FDR achievement that conservatives seem slightly grateful for.

A more effective accusation sometimes made is that he sold out Eastern Europe to Stalin late in WW2. This accusation does have more basis in truth in that Roosevelt exhibited some remarkable ignorance and wishful thinking about the Soviet Union and Soviet policy, but ignores inconvenient military facts that limited his options, like the great preponderance of ground power the Red Army acquired by that stage of the war or that it was in physical control of Eastern Europe. That made the whole thing less of a "selling out" and more of a "fait accompli". Indeed, there is no evidence that Roosevelt did it because he was a Soviet agent or sympathizer.[3]

). He was effectively paralyzed from the waist down for the rest of his life.[note 3] His illness was downplayed during his presidency because people really were shallow enough not to vote for a disabled man to maintain a better public image. Surprisingly, he never got round to creating real-life Daleks (too far?). Had he lived longer, till the 1950s, he would probably have appreciated the fact that Jonas Salk invented the polio vaccine then donated it to the public domain, paving the way for the virtual eradication of this dreadful affliction, when he could have made a fortune patenting it.[4][5]